The percentage of voters who cast their ballot before Election Day modestly increased from 29.7 percent to 31.6 percent from 2008 to 2012, according to a Census Bureau survey.

The Current Population Survey, November Voting and Registration Supplement asks respondents if they voted on Election Day or before Election Day. Thus, the Census Bureau counts persons who voted by any means of "early voting" as voting prior to Election Day, be it by a mail ballot or in-person at an election office or special early voting polling place. 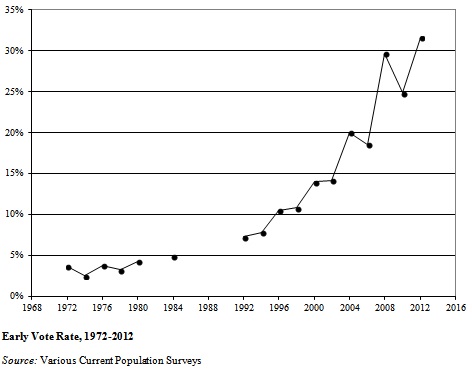 The rate of increase in early voting over the past two presidential elections may have slowed since some states have nearly maxed out the pool of people who may wish to vote early. Also, fewer new states came online to offer an early voting option to their voters, beyond the traditional excuse-required absentee ballot.

The National Conference of State Legislatures reports there are fourteen states that have yet to offer a form of early voting to their voters, besides a traditional excuse-required absentee ballot. Among them are the large states of Michigan, New York, Pennsylvania, and Virginia.

To move the early voting needle appreciably by 2016, some of these big states will need to adopt early voting. Interest in early voting has been rising in New York, particularly following the disruption caused by Hurricane Sandy. Without a catalyst of a large state adopting early voting, I expect the early voting rate will again rise modestly in 2016. The trend should continue upward since once a state adopts early voting, the percentage of voters voting early tends to increase from election to election.

The early voting rate will likely decrease in the upcoming 2014 midterm elections. The early voting rate in a midterm election has always been lower than the preceding presidential election. This may be because, while more people consider voting early, midterm voters generally have less information about the candidates and want to save their vote until they feel satisfied they have learned all they can to make their choice.

Finally, it is instructive to keep in mind that the Census Bureau statistics are drawn from a survey. We will get more information later this summer with the United States Election Assistance Commission reports early voting statistics from election officials. An interesting difference between these two sources is that election officials do not report when a voter cast their mail ballot; in some states, voters can return their mail ballots on Election Day. So, election officials will likely report a higher early voting rate than the Census Bureau as their statistics in some states include persons who voted by mail on Election Day.