Soda sales are down. Beverage makers and distributors know this, but your typical Diet Coke drinker is too busy hauling a case up several flights of stairs to care. Yesterday, Coca-Cola unveiled a new unified brand campaign, which joins Diet Coke and its siblings (Coke Zero and Coca-Cola Life) under the same, rather dull rack of red family signatures. 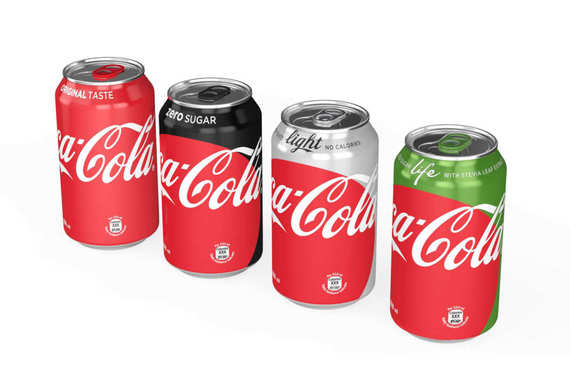 With plans to roll this campaign out across the world by next year, it appears that Diet Coke as we know it could disappear. It never occurred to me that the iconic silver packaging was in jeopardy -- it was as certain as the return of spring or death and taxes.

In the shifting sands of beverage marketing, Diet Coke felt rock solid -- a slightly alternative national treasure like Debbie Harry. Among the Coke kids, Diet Coke is the gorgeous older sister who smokes cigarettes and sneaks out after Mr. and Mrs. Coca-Cola go to sleep. (If you're wondering, green Coca-Cola Life is her tattletale little sister and Coke Zero is the kid from Almost Famous, not quite sure how to announce himself as cool).

The new Coke campaign is like a family Christmas photo in which that cool big sister is forced to wear a twinset over her Joy Division t-shirt. Like Monday's uncomfortable Johnny Depp and Amber Heard video, it made many of us wonder, "Diet Coke, are you being held hostage? Show us today's newspaper as proof of life." Reactions to the change were akin to Blondie dying her hair brown. Behold some headlines from the late-afternoon frenzy:

What The Hell Just Happened To Diet Coke?

Adding confusion to injury, the mocked-up brand revamp was released bearing the name from Coca-Cola's global market terminology for Diet Coke: "Coca-Cola Light." Since the first new cans will launch next month in Mexico, the word "diet" will likely survive in America. I'm not prepared to defend the correctness of "diet" at length, but this a silver lining for people who hate change. Still, the fast-circulating images looked nothing like Diet Coke. That was shocking to people who, like me, have absorbed this brand into their lives.

My Diet Coke loyalty began as a teenage lifeguard in West Virginia. With an endless supply from the snack stand fountain, I learned to enjoy the slightly off flavor to avoid delirious sugar hangovers in the sun. In college, I favored bourbon and cheap red wine -- but that changed when I decided to give up drinking at 21. I needed a nonalcoholic beverage to hold in my hand, to order without hesitation, while my friends stood with martini glasses.

Regular Coke felt like something a child would order to wash down chicken tenders, unfit for civilized adult company. In his memoir Dry, Augusten Burroughs described the phenomenon of sober people gravitating toward Diet Coke. Something as silly as a soda has become an important signature of how I face the world, and how the world sees me. My friends stock their bars with mini cans so I'll always have something to drink--that good fortune would have seemed improbable several years ago. In that respect, Diet Coke has never let me down.

There are online support groups for Diet Coke abusers, and many listicles have counted benefits of kicking the habit. This is where indulgence blurs into addiction, to say nothing of potential health effects down the road. Diet Coke is not good for you -- like a Virginia Slim cigarette, it's as harmful as rival vices but with a distinctive flair.

And what a flair: Raise your hand if you've never been a little intoxicated by the sight of red lipstick hugging the edge of a silver Diet Coke can. If Diet Coke itself didn't begin as an aspiration, the brand would have succumbed to tacky weight loss promises and matronly color schemes long ago. What we have instead is a slick, androgynous, thoroughly modern product of the 1980s -- bad for you, yes, but at least it makes a statement.

Diet Coke is skinny, pop and ironic when paired with a super-sized Big Mac, fabulous in its contemporary American contradictions. It's New Wave and vanity, but your mom drank it in the carpool line. Diet Coke (1982) survived New Coke (1985) the same way Madonna survived Paula Abdul. Lately, it's a stiletto to Green Coke's Birkinstock. If Coca-Cola is late-stage Frank Sinatra singing "Fly Me to the Moon," Diet Coke is Princess Diana listening to a George Michael cover of "Video Killed the Radio Star."

Aesthetically, Diet Coke is the mainstream soda America never deserved, but we got it anyway. And zero calories! Why would anyone tamper with enduring perfection?

The folks at Diet Coke have done an immaculate job extending the brand on its own. As of January, millions of unique bottles bear designs under the "It's Mine" campaign, with colors and patterns that make use of the silver base without rejecting it. Resealable aluminum bottles have lent a futuristic dimension to the brand vocabulary, while petite glass bottles give Diet Coke the family resemblance it needs to feel authentic.

I'm not alone in my loud groan when a server asks, "Is Diet Pepsi okay?" According to Twitter, the drink's fans comprise a small army of loyalists. This is all to say that throwing three decades of iconic packaging out with the bathwater will be a huge mistake, if the proposed campaign reaches the United States. Coca-Cola might not be cooler than that, but Diet Coke is.