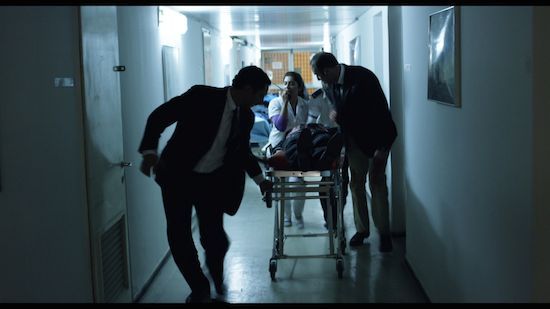 "Sometimes when you feel like the present is stuck, you have to go back to the past to look for answers for the future." -- Amos Gitai

I love movies because they seem to simplify life. Nowhere is it more clear than on the big screen when a character's predicament begins to shift. In lighter rom-coms it will be the moment that marks an ascend into blissful romance, while in dramas it will be that instant that shows the character's descent into darkness and tragedy. If only life were that easy to decode. Perhaps it is, we just don't see it while trying to live it.

In Amos Gitai's latest masterpiece Rabin, the Last Day, the moment when all hope for peace in the Middle East was lost seems to clearly coincide with the day Prime Minister Yitzhak Rabin was brutally murdered. It is the spark that started the chaos that we find ourselves in these days, with Palestinians fighting the Israelis and Israelis fighting the Palestinians and occasionally turning against their own. It was a tragic day that November 4th, 1995, one that changed the course of history and destroyed all hope for a meaningful dialogue between two people who each have their own valid points and who both strangely belong in each other's home. As with anything in life, Israel and Palestine is a conversation that should take place within those human shades of grey, not with the typical finger pointing, rife with violence and fear.

Rabin, the Last Day focuses on the hearings of the Shamgar Commission which was headed by Israel's Supreme Court president Meir Shamgar. As an aside, if you think a film about some classified court proceedings could be dull, well, you haven't watched Gitai's spellbinding moviemaking. During the four-odd months that it was active, the Commission interviewed nearly all who witnessed the murder of Rabin by right wing religious extremist Yigal Amir. But it is what was left out that turned out to be more important than what was included in the final document. Every word in Gitai's film has historical references to back it up, paperwork and archival footage to support it.

History has never been so crucial to our survival.

This year marks the 20th anniversary of Rabin's death -- he was awarded the Nobel Peace Prize along with Shimon Peres and Palestinian leader Yasser Arafat in 1994 -- and a perfect time in every sense for Gitai's insightful, masterfully made film. I would urge all who are able, to watch it, so perhaps a few among us will then recognize the mistakes of the past and avoid making them again, over and over again, in the present and future.

I caught up with Amos Gitai at the Venice Film Festival and his candor and vision were once again for me the stuff interview dreams are made of.

Are all the words in the film exactly how you found them in documents or are some made up?

Amos Gitai: Since this film has such an important resonance, every word in the film is factual. On the one hand there is not great creativity by Marie-José Sanselme [the co-writer of Rabin, the Last Day] and myself, but we thought it was very important that everything was documented. We were sure that there are people who don't share my political views and so we wanted to double check everything and there is documenting of every scene that you see in the film.

Do you have already a reaction from Israel?

Amos Gitai: We have, even before the film was finished we had a reaction.

And what was it?

Amos Gitai: I will let you guess. We are hoping the filmmakers won't have the same destiny as the Prime Minister.

Mr. Napolitano [Italy's former President] was at the premiere of the film last night.

Amos Gitai: It was very touching. I told him, he did a pretty good job in getting rid of Berlusconi and I offered to hire him, to bring him over to Israel.

You lived in a self imposed exile, away from Israel for a while then came back because of Rabin, so is this an homage to a man of possibilities? 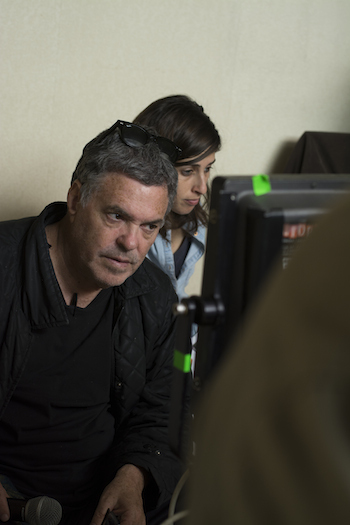 Amos Gitai: I think so. Because the present looks so difficult, in the Middle East I would say, not just Israel. Israel is not the worst part of the Middle East, but it all looks pretty dark and disturbing. Sometimes when you feel like the present is stuck, you have to go back to the past to look for answers for the future. I think that the model of this period of Rabin was a moment of hope and maybe we have to remind ourselves.

All religious fundamentalists seem to be working together to change the world.

Amos Gitai: They are working, maybe not to change the world, but so the world doesn't change. The most stable coalition of the Middle East is people who don't want peace. And they are on all sides. When you have a moderate proposition it will be destabilized like Rabin was destabilized. By all sides, extreme Palestinians nationalists who thought this was a good moment to put bombs in Israeli civil centers, which legitimized the Israeli extreme right wing to eventually shoot Rabin. So I think this coalition works.

Do you ever fear for your own life, because you're one of the most outspoken artists in Israel?

Amos Gitai: I will try to learn from the experience of Rabin and try to be more careful.

By making this film?!

Amos Gitai: This is not the most safe thing, but what can we do. Sometimes we have to speak.

How did you choose which footage to include?

Amos Gitai: Some of it we saw when we wrote the script. The nice thing about filmmaking it's not just me but it's a collective brainstorming of writers, then actors, then editors and then directors of photography. So the film is what it is also because of their talent. I shoot rather fast but after I shoot I need an editor to explain to me what I did.

How difficult was it to get the documents?

Amos Gitai: I am very grateful to the people who directed the archive of the Israeli public television, they were very accommodating and helpful and they saw the importance. Obviously Israel is still not a monolithic society so people who want it to remain a democracy help this kind of work and they were extremely helpful. The archives of France Télévisions were also good.

Why did you use the inquiry into the security failure as a frame?

Amos Gitai: I wanted to show it because this was the subject of the Commission. And also to show the limitation of this inquiry. What they didn't investigate. It was limited to the functional failures. Each time they reached another subject, it was overruled and this was the limit of what they were investigating.

This remind us how violent Israeli society was at that time. A mirror to Israel today, right now. Do you remember that violence yourself?

Amos Gitai: We always thought, and we were wrong, that it was only verbal. Agitated verbally but unlike our neighboring countries where they decapitated people and so on. But apparently we were wrong.

Do you think secularization would work, after all this fundamentalism surrounding Israel?

Amos Gitai: You know Rabin was not some kind of a softie left guy. He was an Israeli patriot, whose project was to protect the existence of Israel by making a series of agreements. If there will be someone who will take this line, it would help the situation.

Are you disappointed by what came after?

Do you think that there is within Israel a silent majority who are opposed to fundamentalism?

Amos Gitai: I think it's a very complicated situation. The fact that the Arab world is in the state that it's in reinforces tendencies within Israeli society to be hardline. And it creates a legitimacy.

Every year I ask you this question, is there hope?

Amos Gitai: And I answer you the same way every year.

No you don't. Which is why I keep coming back for more.

Amos Gitai: I think hope is something that you have to inject into the reality, because the reality is nihilism. But it's not really sure that if you are hopeful, it is really an assessment of the reality. The reality can lead you to say no, we are without any cure. But it you don't have hope what else can you do?

As an Israeli what do you hope for?

Amos Gitai: I'm making this film because I thought Rabin was persistent in trying to find inroads into the Arab world. As I mentioned, it's not easy but it's necessary. That piece of speech that I filmed myself with him in Cairo, when he talks about Gaza, that it's a consideration of "the Other"... I think any relationship cannot exist without recognizing "the Other". The Other must be part of any relation. You cannot do it unilaterally.

RABIN, THE LAST DAY (2015) by Amos Gitai [trailer] from Richard Lormand on Vimeo.

Photo of Amos Gitai by Barry Frydlender, all images courtesy of Richard Lormand - Film Press Plus, used with permission.