In choosing the academic life, most teachers expect to be part of a community committed to freedom, fairness, and justice. It's the rare academic who does not take pride in belonging to an honorable profession.

I was a young college president during the turmoil of the '60s and early '70. Within a few years, students, faculty, and administrators at virtually all our institutions of higher learning were serving on committees charged with aligning institutional policy with emergent values of racial diversity and gender equality.

By century's end, most colleges and universities had taken steps to disallow discrimination based on race, gender, age, disability, and sexual orientation. 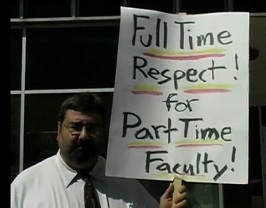 Once again, we find ourselves in a moral predicament. In educational institutions of every kind, adjunct faculty are being subjected to de facto discrimination and exploitation. They know it, tenure-track faculty know it, administrators know it. The awful secret is out, and we can no longer avert our eyes. We'll have to deal with this injustice as we did with those that came to a head in the '60s, because if we do not close the gap between our principles and our practice, the profession will forfeit its honor.

I need not belabor the immorality of paying adjuncts a fraction of what other faculty earn, and of denying them benefits, office space, parking rights, and a voice in departmental and institutional policy. These insults and humiliations are reminiscent of the degradation and injustice that roused academics to act against racial, gender, and other indignities.

Of course, there's a reason that things are as they are. There is always a reason, one which seems cogent enough until suddenly it does not. What began as part-time teaching to meet a temporary need or plug a gap in the curriculum has evolved into systemic institutional injustice.
No one takes exception to cost-cutting, but forcing one group to subsidize another that's doing comparable work, while maintaining working conditions that signal second-class status is now widely regarded as unjust.

The extent of the exploitation of adjuncts is inconsistent with both academic and American values. By working for a pittance, adjunct faculty are serving as involuntary benefactors of other faculty, administrators, and students. That administrators and tenured faculty are themselves the beneficiaries of such victimization only strengthens the case for righting this wrong.

Honor requires that colleges and universities examine this practice and take steps to grant equal status and equitable compensation to those who, for whatever reason, are classified as adjunct faculty.

How might this be done? Coming up with a plan to end exploitation is never easy, and no doubt will require that we do what we did forty years ago: charge college and university committees -- that include representatives of all stakeholders -- with devising equitable solutions. Everything must be on the table, even the sensitive issue of tenure.

As anyone acquainted with adjunct professors knows, they are, on average, as conscientious and committed, and as capable of carrying out research and of inspiring students, as the tenure-track faculty they subsidize.

Let me suggest a goal to guide the deliberations of what I hope we will soon see on every campus: a "Committee on the Status and Compensation of Adjunct Faculty." That goal is: Part-Time, Full Status, Equal Dignity.

If colleges and universities tackle this threat with the same commitment and determination they brought to the issues of civil and women's rights, they will find a way to end the exploitation of those now relegated to the back of the bus.