Connect the dots between George W., Sarah Palin, Michelle Bachman, Rick Perry and Herman Cain and what you end up with is a roadmap of stupid. It's the one thing about the current Republican party that the rest of us find so baffling, this obsession with choosing "regular" over extraordinary. For some reason, there is a particular type of voter who wants only the candidate who talks like them, walks like them, drives the same pickup truck, prays in the same church, drinks the same beer, and shoots the same animals. These voters, these "regular Americans" who'd rather place their faith in a neighbor than a leader have ruined their party, drowned their country, and broken the world. 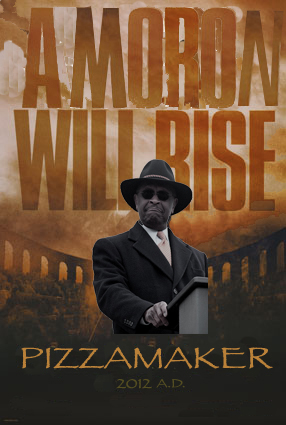 Believe it or not, I don't think I'm actually making a political argument. I'm a Democrat, yes, but I can appreciate the very real and valid positions that many on the Right hold dear: Small government, personal responsibility, freedom from overregulation, state's rights, robust defense, a strong Israel. Even in the areas where I disagree, I recognize that there are cogent arguments to be made for all of the above. The problem is that so many people on the Right inexplicably favor leaders who are incapable of making those arguments.

I think most people will agree at this point that Bachman, Perry and Cain are genuine idiots. Between the three of them there probably isn't enough brain power to finish a crossword puzzle, let alone tackle the challenges of Iran, North Korea, China, Russia, Al Qaeda, Pakistan, Afghanistan, Iraq, the European debt crisis, our own economy, the mortgage crisis, the jobs exodus, or the political paralysis in Washington.

What about Newt Gingrich? He's the smart one, right? Wrong. Newt is like "the other white meat," same cholesterol, better marketing. He just says he's the smartest guy in the room so often that the dumberazzi are actually starting to believe him. That brings me to Huntsman, the exact opposite of Newt. Huntsman is smart, but is too humble and sane to get any attention. Speaking of sane, there's Santorum, who most certainly isn't. But that isn't his real problem. The real problem is that he makes everyone queasy, and I don't even mean the Google thing.

As with most conversations about the Republican field right now, all things narrow down to the inevitable -- Mitt Romney. Is he a smart guy? Definitely. Then why do they all hate him? Because even his own party can see that he's morally bankrupt. Mitt Romney would change his gender if it meant winning an election.

So, what is a Republican to do? New frontrunners appear as often as those infamous "brain freezes" of theirs. There is no sure thing, no one who makes you feel safe, no one who you can count on. The Left is thrilled, of course. But, suddenly, I find myself worried for all of us. We have real problems. Big problems. Scary problems. Our problems require more than just "regular guys," and even more than the run-of-the-mill extraordinary ones. We need heroes, heroes on the Right and the Left.