Many opera companies have experimented with updating works from the standard repertoire in order to make them more relevant to contemporary audiences. Why? Doing so has financial as well as artistic rewards (because the scores to many operas are now in the public domain, an impresario may not need to pay royalties in order to be granted production rights).

The San Francisco Opera recently scored a major success with its new production of Donizetti's 1835 opera, Lucia di Lammermoor, which had been updated to some kind of modern mythic landscape. This season the Metropolitan Opera is reviving Michael Mayer's production of Rigoletto, in which the action has been updated and relocated to Las Vegas in the 1960s (Jonathan Miller's 1982 production of Rigoletto for the English National Opera relocated the action to New York's Little Italy in the 1950s).

Over the decades, Gilbert & Sullivan's most popular comic operas (The Mikado and The Pirates of Penzance) have undergone constant reinvention. 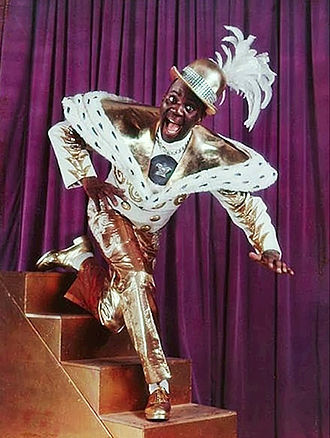 Many people forget that The Pirates of Penzance; or, The Slave of Duty had its world premiere in New York on December 31, 1879 at the Fifth Avenue Theatre. Since then, Pirates may have eclipsed The Mikado as the most popular Gilbert & Sullivan operetta. On November 13, 1955, artists from the famed D'Oyly Carte Opera Company (Ann Drummond-Grant as Ruth, Neville Griffiths as Frederic, and the great Donald Adams as The Pirate King) performed the "When you had left our pirate fold" trio on the popular television series, Omnibus.

The desire to liven up The Pirates of Penzance gained momentum in 1980, when Joseph Papp presented Wilford Leach's production with a cast headed by Rex Smith, Linda Ronstadt, Kevin Kline, and George Rose as part of the Public Theatre's annual Shakespeare in the Park series. After 45 outdoor performances at the Delacorte Theatre in Central Park, the production (which featured new orchestrations) transferred to Broadway, where it ran for nearly 800 performances. In 1983, the Public Theatre's production was filmed with its original leads, although Angela Lansbury replaced Estelle Parsons in the rule of Ruth, the middle-aged "piratical maid-of-all work."

In 1994, Australia's Essgee Entertainment toured a cheeky production of The Pirates of Penzance which took plenty of liberties with the original. According to Wikipedia, "The Australian Broadcasting Corporation broadcast the production on television throughout Australia. The video/DVD enjoyed triple platinum sales, becoming the top-selling music video in Australian history."

In 2006-2007, Anthony Warlow starred in Opera Australia's touring production of The Pirates of Penzance. His Pirate King was obviously modeled on Johnny Depp's characterization of Captain Jack Sparrow.

The latest adaptation of The Pirates of Penzance was recently presented by the Berkeley Repertory Theatre as its family-friendly holiday show. Adapted and directed by Sean Graney (along with co-adapter Kevin O'Donnell and co-director Thrisa Hodits) for the Chicago-based theatre company known as The Hypocrites, the production features choreography by Katie Spelman with costumes by Alison Siple.

Tom Burch's unit set includes several blue plastic wading pools which anchor the main playing area as well as a bar/refreshment stand which the audience is encouraged to patronize throughout the 80-minute show. Andra Velis Simon's music direction includes new orchestrations written so that Sullivan's music can be performed on ukulele, guitar, banjo, concertina, accordion, and a musical saw.

How a person reacts to this production will greatly depend on their age and previous exposure to Gilbert & Sullivan. As one enters the playing space, the room is filled with people tossing brightly colored beach balls and inflated plastic sharks at each other as members of the cast sing, play instruments, and jump up and down with a vengeance. Billed as a piece of immersive theatre, this production has been designed as a playground for people with ADHD (attention deficit hyperactivity disorder). If you have a squirming child (or grandchild) who has run out of Ritalin and feels that he has outgrown Chuck E. Cheese's, this is the holiday show for you!

Whereas the Public Theatre's production of Pirates interpolated "Sorry Her Lot" from 1878's H.M.S. Pinafore and the "Matter Patter" trio from 1887's Ruddigore, The Hypocrites' production goes way beyond Gilbert & Sullivan in its effort to include music familiar to a modern-day audience. 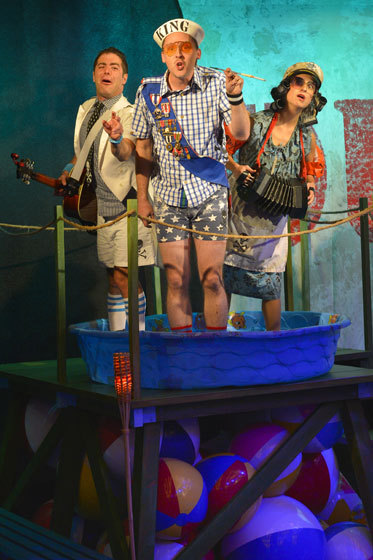 Whereas Frederick (Zeke Sulkes) and Mabel are usually cast with the strongest voices in any Pirates company, in this production the strongest voices belong to the men portraying The Pirate King (Shawn Pfaustch) and Major General Stanley (Matt Kahler). In an interesting move, the roles of Mabel (the ingenue usually sung by a coloratura soprano) and Ruth (usually sung by a contralto) were both performed by Christine Stulik, whose shrillness and pitch problems were made all the more painful by Kevin O'Donnell's amplification. 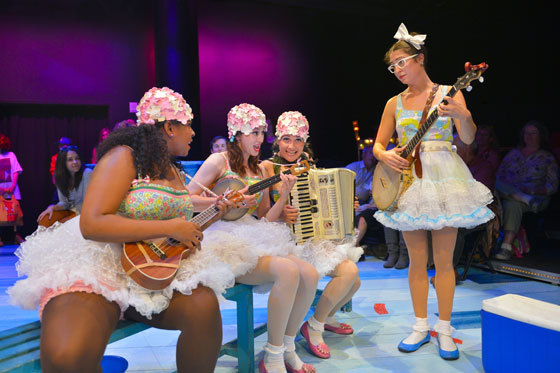 Christine Stulik (Mabel) sings "Poor Wandering One" with a
backup trio comprised of Jenni M. Hadley, Kristen Magee, and
Becky Poole in The Pirates of Penzance (Photo by: Kevin Berne)

As someone who is not shy about indulging in wretched excess, even I felt that Graney's production suffered from the artistic equivalent of unrelenting ejaculation. Whereas some might describe an unskilled woman's facial technique as "applying makeup with a trowel," The Hypocrites' approach to The Pirates of Penzance felt like being caught in a fast and furious game of Whac-a-Mole with serial shtick that would not die. The production's fever pitch brought to mind one of my favorite lines from 1875's Trial By Jury: "She may very well pass for 43 in the dusk with the light behind her."

In recent months there has been a tremendous brouhaha among theatre artists about cultural appropriation with regard to productions of The Mikado in which Caucasian actors have used Yellowface to portray Japanese characters. One aspect of cultural appropriation, however, which has become increasingly annoying is the tendency of today's hipsters to seize on past styles and trends in an attempt to claim them as their own.

From folks like Sarah Chrisman and her husband, Gabriel (who prefer to live a Victorian-era lifestyle with no electricity) to any number of pretentious Millennials who aspire to reinvent the past in order to stand apart from their peers, this 21st-century form of cultural appropriation forces some people to confront what Gilbert & Sullivan called "a most ingenious paradox."