In the nearly four years since SeaWorld trainer Dawn Brancheau was crushed, scalped and drowned by an orca named Tilikum, countless families have decided to stay away from the marine theme park. New parents Alec and Hilaria Baldwin have gone a step further by calling on Macy's to remove the SeaWorld float from its Thanksgiving Day parade, joining nearly 80,000 others who have already e-mailed the department store.

Few people today believe that keeping these animals -- who have evolved to swim in the vast open oceans over the course of millions of years -- in captivity is ethically defensible. With his usual blunt manner, father-of-three Howard Stern recently asked, "What kind of idiot goes to SeaWorld anyway?" And it's true that attendance at the parks continues to drop.

Orcas live in extended matriarchal families, and in some populations, calves stay with their mothers for their entire lives. In contrast, at SeaWorld, where orcas are used as breeding machines to churn out future performers, mothers and their babies are separated permanently. The youngsters wail in anguish as they are forcibly taken away, and their mothers can do nothing but cry out in despair. As a mother myself, the thought of having my son torn away from me is too much to bear. The sheer desolation and hopelessness that these orcas must feel every minute of their lives is heartbreaking. 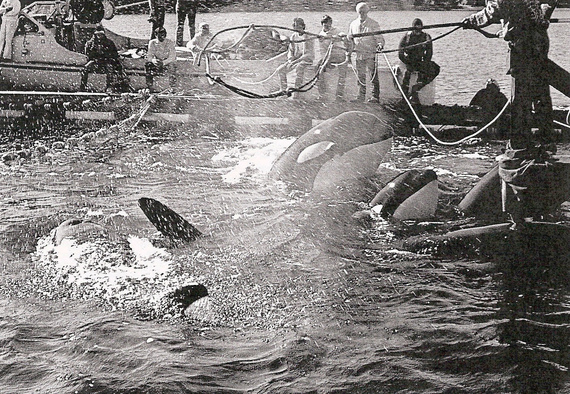 SeaWorld was slapped with a fine after Brancheau's death and ordered to keep employees safe from death and harm -- which meant an end to allowing trainers to get too close to the orcas. Not to be deterred, however, SeaWorld repeatedly contested the new safety requirements and continues to do so. The corporation is now in court trying to overturn the prohibition on working in close, unprotected contact with depressed, angry, volatile whales, even though its own corporate incident logs -- which became public during earlier hearings -- detail more than 100 incidents of orca aggression at its parks.

Some of those incidents are depicted in the riveting new documentary Blackfish -- also available through Netflix -- which tells Tilikum's story and shows how locking up intelligent, sensitive marine mammals can lead them to commit violent acts out of sheer frustration. Tilikum has been in a highly restrictive tank for 30 years, ever since he was torn away from his Icelandic family. People who have seen the film are rightfully appalled by what it reveals. Students from San Diego's Point Loma High School (right in SeaWorld's backyard) were so moved by the documentary that they wrote, starred in and edited a hard-hitting video -- titled "Dear SeaWorld" -- in which they call out the park for sentencing orcas to live and die in a "puddle." Thirty-seven orcas have died in SeaWorld's parks so far.

Families who care about animals and don't believe that orcas should be forced to live in cramped concrete tanks and to perform silly tricks on command for human entertainment should stay away from SeaWorld's abusement parks.

Tracy Reiman is an executive vice president with People for the Ethical Treatment of Animals; www.PETA.org. Follow her on Twitter at www.twitter.com/thetracyreiman.

Executive vice president, People for the Ethical Treatment of Animals