I am one of roughly ten million American moms who've left the workforce to raise young kids, a percentage of the population that is steadily rising, not falling. Although I had a career in human rights advocacy and an expensive education under my belt, the decision came down to simple math. I could leave my kids with paid childcare, costing nearly all of my earning potential while away, or I could do the unpaid childcare myself.

In the United States, which fails to provide affordable early childhood education, unlike many other developed countries, most mothers must make a similar choice. Some women are fortunate to have maternity leave or family caretakers to depend on, for a short while anyway, and a handful of women will net a few bucks after paying for coverage, taxes and commuting. With more than eleven million single moms in the US, 76% of which are gainfully employed, there are usually no affordable childcare options, trapping women in a cyclone of poverty. You either work and parent, barely making frayed ends meet, or you stay home with government assistance and withstand the shame of being "unemployed", even as you work your tail off. Recently, a mother in New York wrote about losing her child on his first day of daycare after she was forced to either return to work or quit her job, her difficult decision echoed in the hearts of millions of moms today.

Republican lawmakers often label stay-at-home moms "welfare queens", claiming they drain the federal budget. In reality, government assistance makes up only 24% of federal spending, two-thirds of which goes to Medicare for people over sixty-five; Not to mention families who receive government assistance while working and paying taxes, a population that now makes up 56% of federal aid recipients.

To add insult to injury, moms who stay home for a few years are often penalized when they return to the job market. Rather than being lauded for their newly attained skills, stay-at-home moms are treated as if they've taken a long vacation or lost touch with the modern world.

The other night, I watched a scene in the popular TV show, Married. Actress Judy Greer plays a mother attempting to return to work after raising three kids, hoping for an office management job. Once she finds her old resume (on a floppy disk), she and a friend try to cleverly craft her mothering skills into resume appropriate terms. "I once flew by myself with all three kids... while I was breastfeeding!" She boasts. "Ha! That is a baller move. But not something I would consider résumé material," her friend sighs, a look of pity.

"What!" My sleep-deprived hackles suddenly up. Having recently endured the experience of raising small humans myself, I know for certain that there is no one more qualified to manage an office than a stay-at-home mother of three. I feel like I've been through some form of Navy SEAL training with just two. When I compare the me-of-today to the twenty-something-employee that I was before raising kids, it's no contest. Motherhood has turned me into a straight-up badass.

There's got to be a way to reframe this because, frankly, the American job force needs highly trained, tough-as-nails moms in its ranks and, apparently, it doesn't know it yet.

So I tried it.

Instead of camouflaging the mom in my résumé, I put her right in there, front and center alongside my other applicable skills. Only I didn't get the job. Nor the one after that. A friend of mine tried it and she didn't get the job either. I started to think this was a bad idea. The business world obviously isn't ready to view motherhood as a "real job". Instead of being taken seriously, it appeared I was making a mockery of my "work", which only worked against me.

I gave in and made a résumé without the mama-me, beefing up the small consulting work I was barely able to do on the side to, you know, pay for preschool. I made sure to hide all the 3:00 am bouncy struggles, the all-night-fever watches, the stunning achievement of teaching a child to walk...and then to run...and then to fly.

But once I'd polished all the spit-up and tears from the page, it was utterly devoid of me.

The most important on-the-job training I had ever received; the levels of multitasking mastered; the psychological torture of being on one's feet for twelve hours after only three hours of sleep; the diplomacy required to bring families together over holidays and clashing customs; and the sheer humility gained in volunteering to be covered with bodily fluids for years on end...none of it was in there.

How could I interview for a job and pretend like I hadn't risen to superhuman status over the past six years? Resumegenius.com, Monster.com, Forbes.com each provide tips for hiding the parenting years when re-entering the job market. The Forbes article even recognizes that raising kids is skill building, stating, "You've got a gazillion amazing new skills--this is indisputable. The problem? Many of your talents have been refined over the past few years through your most recent job as a stay-at-home parent...not a "real job". Each piece cautions against overtly mentioning one's kids, unless it comes up directly in an interview, asserting that employers will only hear "sick days" and "family priorities."

From where I stand, employers should be reveling in the fact that they may have landed a dedicated, home-trained, Superhero. What are a few sick days compared to an employee that works every other day like her kids depend on it? Not to brag, but I can change a diaper, cook dinner, pay bills and order Christmas presents at the same time, and so can most of the moms I know. And let's just take a moment to recognize moms with multiples! Employers out there, if an applicant bravely mentions that they've had twins or more, hire them on the spot; their level of training has been a notch above the rest, their skills masterful.

In order to flip-the-script on this whole fallacy, to define motherhood as the hardcore job training that it is, and to merge the two conflicting hats working moms struggle to wear every day, I created "A Mother's Résumé", because it's 2016. Here is my list of job-applicable skills that I gained while staying home with small children, available as its own downloadable image.

Feel free to weave this info into your résumé, share it with other moms looking for work or print out a copy to remind yourself of ALL that you are. The more of us who own our maternal powers and proudly claim our at-home achievements, the more likely the business world will begin to recognize motherhood as an asset, rather than a liability.

As 2016 dawns and we look to our next big ventures, let's collectively change the conversation to stop pretending like our metamorphosis into motherhood isn't relevant to our professional life. Heck, this is the year we might finally see a mom leading from the White House! If you are bold enough to try it, apply for a job using "motherhood" in your previous job experience, or as part of your relevant skills, and let me know how it pans out in the comments below. Or add some unique skills you've gained through parenting, I'm sure I've overlooked many. At the very least, let's agree to talk more about motherhood as the badge of bravery and growth that it is, rather than something to hide or isolate from our work.

I can imagine a world where stay-at-home moms return to the job market proud of their hard earned, newly minted, human survival skills and confident that any prospective employer will feel the same...But it turns out, along with everything else we do, it's going to be up to us moms to create it.

"One life is all we have to live and we live it as we believe in living it. But to sacrifice what you are...that is a fate more terrible than dying."
-Joan Of Arc

Be Bold, Be Brave. 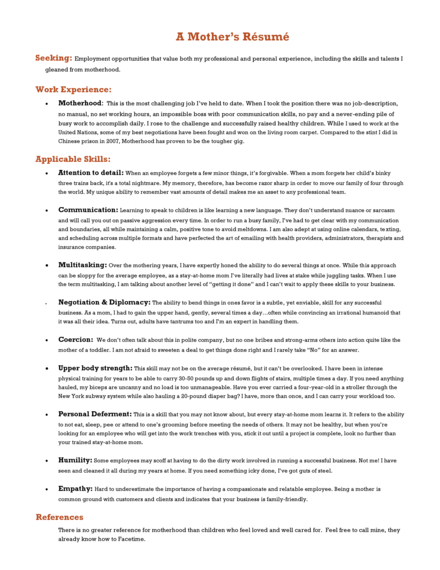