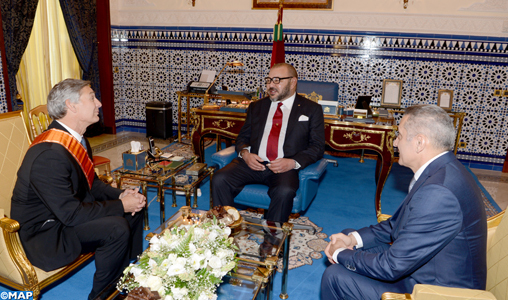 Moroccan King Mohammed VI meets with the leadership of Boeing, upon the establishment of a major industrial zone in the northern Moroccan port city of Tangiers.

Morocco has officially submitted its request for reinstatement in the African Union -- a shift expected to have far-reaching consequences. Morocco was one of the founders of the Organization of African Unity, the predecessor of the present "Union." It was in Casablanca that the OAU first launched. As the group worked to conceptualize its mission and purpose, only Moroccan diplomats express reservations about the principle that the borders of African states inherited from colonialism should be inviolable. In doing so, they had the Sahara conflict in mind. Today, the African Union has an important role to play on the continent -- as a voice for the resolution of its many conflicts and a force for good governance and democratization. But the group has long found it difficult to affect positive change in such matters. Morocco seeks to return to the AU because the stakes for stability in Africa are now global, and the Kingdom hopes and believes that it can make a difference.

The reason Rabat first left the organization was the conflict over Moroccan Saharan territories claimed by a separatist militia known as the Polisario. In this vexing dispute, Eden Kodio, the OAU General Secretary at the time, manifested hostility toward Morocco. He had been prevailed upon to do so by Algeria, whom the guerrillas have long served as a proxy militia with which to needle Morocco. But 32 years later, much water has flowed under the bridge. The Kingdom's return to the AU has the potential to reinvigorate the group's capacities: Morocco is an important regional power. AU members overwhelmingly support its re-engagement with the organization, and look to it to play a leadership role. Newly reunited, the group can add considerable weight to UN efforts to manage and resolve conflicts in the area.

Perhaps the only elements unhappy about the Moroccan move are the Polisario and its allies, who have long benefited from African disunity. They have been attempting to torpedo Moroccan reintegration into the AU, likely aware that the effort would be futile: Morocco -- a major contributor to UN peacekeeping missions and a passionate proponent of South-South cooperation -- is an anchor in Africa. It was also the first African investor in the Economic and Monetary Community of Central Africa (CEMAC) and the Economic and Monetary Union of West Africa (UEMOA), whose trade volumes have doubled over the past four years. The Moroccan private sector has been active across the continent for decades -- in finance, air transport, pharmaceuticals, real estate, insurance, telecommunications, and other areas. Today, the country's enterprises are ubiquitous in trans-Sahel states such as Côte d'Ivoire, Mali, and Senegal, but also in Cameroon and Gabon, and even in southern Africa and the east African nations of Angola and Burundi. Morocco has accordingly begun to attract foreign investors seeking a gateway to the continent. It is perhaps indicative of these trends that Boeing, the world leader in aerospace technologies, has launched a major project to establish an industrial zone in the northern Moroccan port city of Tangiers, where up to 120 Boeing suppliers and sub-contractors can operate. The agreement is expected to create 8,700 jobs, and generate annual revenue from exports as high as $1 billion. The company's President, Raymond L. Conner, said that in signing the agreement, Morocco is establishing itself as a an important platform for the global aerospace supply chain -- and tied the achievement to King Mohammed VI's longterm vision for national and regional development. The relationship with Boeing dates back 50 years. Conner added and observation with respect to one of the company's prior dealings with Morocco: "Through our joint venture in Casablanca, we have already seen with our own eyes the unique opportunities offered by Morocco to subcontractors of aviation to reduce costs while producing high quality aviation products." Boeing and the Kingdom have developed an incentive program to bring new Boeing suppliers to settle in Morocco, he added. Thus the return of Morocco to the African Union reflects the broader growth of one of the continent's main actors.