Welcome to the United Corporations of America, where Big Money reigns and our lawmakers represent special interests over public interests.

This is our inherited political reality since the Supreme Court's 2010 ruling in Citizens United vs. FEC, the landmark decision that caused election spending to be dominated by the wealthy. Citizens United disenfranchised the majority of Americans by reinforcing the pay-to-play culture in Washington.

Suddenly, "one person, one vote" has become "one dollar, one vote." And the person with the largest bank account speaks with the loudest voice.

Take for example the growing costs of a college education. Bills written by our legislators allow Wall Street to profit off increasing interest rates on student loans while young graduates struggle with massive debt--postponing home ownership, marriage, and families. Why? Wall Street has contributed over $200 million every election cycle since 2010.

The same story is true with gun control, healthcare, the environment--you name it. Since 1989, The NRA has contributed $22.3 million to candidates. And in 2014 alone, they spent an additional $27 million in "independent expenditures" to ensure that Congress won't pass reasonable gun reforms, which 85 percent of the U.S. population supports. In 2015, the health industry invested over $119 million in campaign contributions to preserve big profits for private insurance companies and big pharma. That same year, the energy industry invested over $101 million to block environmental regulations that could help arrest climate change. When the government is more responsive to private interests, the people lose out. And right now we're losing.

Everyone knows the system is broken. In this election cycle, that anger is magnified in technicolor. People are mad as hell and they want to break Big Money's stranglehold on the Capitol - that's what Bernie Sanders meant when he talks about a political revolution. At the heart of Bernie's candidacy was campaign finance reform and he is an icon for mobilizing the energy and fervor needed to end our corrupt campaign finance system.

Most importantly, Bernie's political revolution gave ordinary citizens something they had lost in our money-dominated political system: a voice.

But true reform requires massive, day-to-day public demand. Bernie's campaign was never about one person, it was never about winning one election, it was about sparking a political revolution and toppling the status-quo. That's why it is critical to continue Bernie's fight beyond the primaries, and this presidential election. That's what I'm doing with Stamp Stampede. 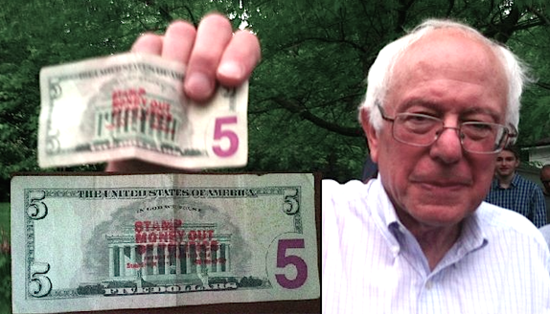 The Stampede is a decentralized movement that lets anyone, anywhere protest our broken government. Over 65,000 Americans are already rubber-stamping dollar bills with messages like "Stamp Money Out of Politics" and "Not To Be Used For Buying Elections," then spending those bills--generating enormous public attention and showcasing mass public demand for change.

As the historian Howard Zinn said, "Small acts, when multiplied by millions of people, can quietly become a power no government can suppress, a power that can transform the world."

A stamped bill, once put in circulation, will be seen nearly 900 times in its lifetime. If one person stamps three bills a day for a year, those bills will be seen by nearly 1 million people. Together, we can create a Stampede that even Congress cannot ignore.

It's time to restore a government of, by, and for the people. In order to get there, we need to amplify our voices into one unified cry: STAMP MONEY OUT OF POLITICS!