"The accumulation of all powers, legislative, executive, and judiciary, in the same hands, ... may justly be pronounced the very definition of tyranny."
-- James Madison in The Federalist Papers. 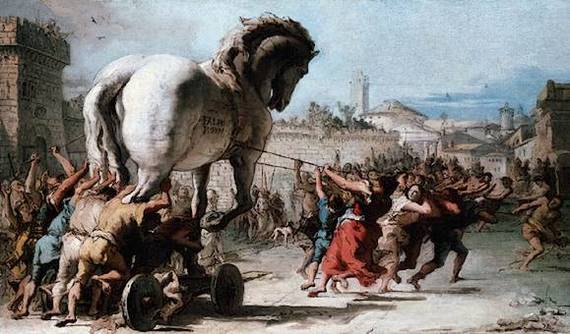 You don't have to know much about the "trade" deal called the Trans-Pacific Partnership (TPP) to be more than a little suspicious.

First, there are the very peculiar bedfellows. Supporting the TPP are President Obama and most Congressional Republicans, the same Republicans who've vehemently opposed his every initiative for the past six and one-half years.

Against the TPP are most (but not all) Congressional Democrats, Ford Motor Company, virtually all trade unions and environmental groups, watchdog groups such as Public Citizen, and usual Obama allies such as Massachusetts Senator Elizabeth Warren and Ohio Senator Sherrod Brown, who, in a testy open letter to the President on April 25, called for greater transparency on the TPP.

Furthermore, when asked to lend his support for so-called "Fast Track" authority for the TPP, Obama water-carrier and former Senate Majority Leader Harry Reid chafed, "So the answer is not only no, but hell no."

What's going on here? Why the strange alliances?

Peel back the layers of the TPP and you'll find what some believe to be a "corporate Trojan horse." Disguised as "free trade," the TPP's provisions and tactics undermine Constitutional safeguards and national sovereignty. But there's also a silver lining. The TPP exposes who, in the marbled halls of political power, is working for whom. It forces politicians to put their cards on the table, and by their hands you will know them.

In a recent interview, Chomsky called each word false in the euphemism "free trade agreement." There's nothing "free" about it. With nearly 30 chapters, only a half-dozen or so about international commerce, it's not really primarily about "trade." And, having been conducted in secret, shielded from the watchful eyes of the public and their congressional representatives, it's hardly a broad "agreement."

Every citizen has an obligation to find out what's in this "deal." That's difficult, because the Obama administration has decided to treat TPP documents as classified. Indeed, we know the outlines of the TPP only because of leaks.

If you still haven't made up your mind, read the chilling "The Trans-Pacific Partnership and the Death of the Republic" by Ellen Brown of the Public Banking Institute. Is it all hyperbole, or could things be as ominous as they seem?

The TPP, which involves 12 nations and 40% of the earth's trade, has been called "NAFTA on steroids." (NAFTA, recall, was the North Atlantic Free Trade Agreement of 1993 negotiated during the Clinton Presidency). Every such agreement has been sold to the public by the promise that free trade floats all boats. What's the reality? According to Buchanan, "... almost all [the big trade agreements] have led to soaring trade deficits and jobs lost to the nations with whom we signed the agreements." Over the past four decades of free trade, America, cites Buchanan, has lost 55,000 factories and 5-6 million manufacturing jobs, all while racking up $11 trillion dollars in trade deficits.

So, who, if anyone, benefits by so-called "free trade?" Only the multinational corporations set "free" to scour the earth for the hottest sweatshops and the cheapest labor. Free trade is a global race to the bottom.

Given the dismal track record of such deals, one would expect future agreements to be negotiated in the light of day by representatives of all stakeholders. So, who's at the table crafting the TPP?

"The Administration's 28 trade advisory committees on different aspects of the TPP have a combined 566 members, and 480 of those members, or 85%, are senior corporate executives or industry lobbyists," the Warren-Brown letter asserts. "Many of the advisory committees -- including those on chemicals and pharmaceuticals, textiles and clothing, and services and finance -- are made up entirely of industry representatives." Absent from that table are all congressional representatives.

In April, the Obama administration began the process of petitioning Congress for "Fast Track" authority on the TPP. Some believe that Fast Track (which originated with Richard Nixon) is executive usurpation of Article I, Section 8 of the Constitution: "The Congress shall have the power... to regulate commerce with foreign nations." An end run around Congress, Fast Track minimizes oversight and public debate. It cedes negotiating authority to the executive branch and then binds Congress to an up or down vote, severely constrained by time and without adequate discussion or filibuster.

Where are the hair-on-fire Republicans incensed over the imperial presidency of Barack Obama? Firmly in Obama's camp! The self-proclaimed party of the Constitution, the family, and God seems only too happy to sell out all three to its prime constituencies: Wall Street and K-Street. Buchanan admits the painful truth: "Fast Track is the GOP payoff to its bundlers and big donors."

The most troubling aspect of the TPP, asserts Ellen Brown, is the Investor-State Dispute Settlement (ISDS) provision, which "first appeared in a bilateral trade agreement in 1959." Brown continues:

According to The Economist, ISDS gives foreign firms a special right to apply to a secretive tribunal of highly paid corporate lawyers for compensation whenever the government passes a law ... that [negatively impacts] corporate profits -- such things as discouraging smoking, protecting the environment or preventing nuclear catastrophe.

Imagine a scenario in which the U.S., coming to its senses about climate change, imposes a revenue-neutral carbon fee on fossil energy. According to provisions of the TPP, a fossil-fuel company in a signatory nation could then sue the U.S. for lost profits, real or imagined.

The threat is not idle. In 2012, the U.S.'s Occidental Petroleum received an ISDS settlement of $2.3 billion from the government of Ecuador because of that country's apparently legal termination of an oil-concession contract. Currently, the Swedish nuclear-power utility Vattenfall is suing the German government for $4.7 billion in compensation, following Germany's phase-out of nuclear plants in the wake of Japan's Fukushima disaster.

The ISDS provisions of the TPP are insidious: the means by which signatory nations voluntarily surrender national sovereignty to the authority of corporate tribunals, without appeal, and apparently without exit provisions. No wonder the negotiations are secret.

Packaged as a gift to the American people that will renew industry and make us more competitive, the Trans-Pacific Partnership is a Trojan horse. It's a coup by multinational corporations who want global subservience to their agenda. Buyer beware. Citizens beware.

(The author is indebted to the ever-vigilant Economics Working Group of Occupy Harrisonburg for numerous references, insights, and editorial suggestions.)