Usually, when Americans hear the term "Muslim cleric," they cringe. Yet there's an Islamic religious leader who calls for peace and inter-faith dialogue, whose supporters are being rounded up by an increasingly authoritarian leader. Backing the right leader could be the key in the war against ISIS.

The setting is Turkey, where President Recep Tayyip Erdogan has been rounding up followers of Muslim cleric Fethullah Gulen. Their only crime was catching Erdogan engaged in corruption. In response, the Turkish President had law enforcement personnel and prosecutors arrested on trumped-up charges or fired. Sadly, the world paid little attention to such events, and said even less about it.

Emboldened by the feeble European and American response, Erdogan recently chose to round up reporters, media companies, and other businesses linked to them. Such raids smack more of the politics of Vladimir Putin than a Western-style democracy that Turkey claims to be.

Erdogan's own state-run news network, the Anadolu Agency, called them "the Gulenist Terrorist Group." But a closer look shows that the Gulenist group got in trouble when they revealed another Erdogan ally had ties to Al-Qaeda. And other press sources have shown that Erdogan has turned a blind eye toward ISIS terrorism (and may have helped them, according to one newspaper), a group Gulen condemns. Erdogan's aim seems to be better at hitting Kurds in his own country, instead of extremists threatening the world. That's because Kurds are fighting ISIS in Syria.

Part of the reason most Americans would be wary of supporting an Islamic cleric goes back to the Iranian Revolution. We assume any Muslim religious leader is a carbon copy of Ayatollah Ruhollah Khomeini. Perhaps that's why there is some resistance to an Iranian nuclear deal, because we incorrectly believe that that Hassan Rouhani is no different.

But Gulen isn't like that. He has lived in the United States since the late 1990s. He took out a huge ad after 9/11 to condemn the hijackers, contending that they did not reflect Islam. He supports closer ties between Jews, Christians and Muslims. 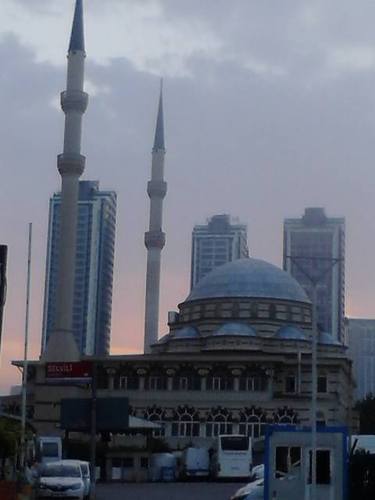 In Turkey, the business world and Muslim world coexist, for now. But the current regime may change that.

While researching the country's 2015 election, I decided to see for myself how conditions were, and what Gulen's followers were really like.

I got to interview several journalists about covering Turkish politics. "We are in hell," one female reporter told me. "We expect to be arrested at any moment."

"All journalists used to come together," another told me. "But after the corruption probe, pro-government journalists see us as the enemy." Despite such fears, the men and women stayed committed to covering politics, even at great personal risk.

I also spoke with several businesses run by Gulenist followers. They confirmed that journalists are getting arrested and both police and prosecutors investigating Erdogan were fired.

"We get harsh inspections," one business person told me back in late May. "They are digging for any mistakes or missing documents, giving out heavy fines."

Another told me "Some of the police tell me 'give me something that I can report so I won't get in trouble with my bosses,'" he said. "They tell me they know it's wrong, but they are afraid of losing their jobs."

Erdogan is looking for revenge after the 2015 election, when voters not only kept him from getting a supra-majority that would allow him to rewrite the constitution to give himself more power, but also cost his party the majority. The Kurds who voted for their own party were bombed by the regime. Gulenists who revealed Erdogan's waste and corruption were arrested.

Americans need to overcome their phobias about Islamic clerics. They need to tell the Obama Administration to block Erdogan's demands that Gulen be extradited to Turkey for trial, and pressure their member of Congress to hold Obama's foreign policy team accountable for working with Erdogan on their so-called ISIS-fighting strategy. Otherwise, we might find that one of our NATO allies might have flipped to the side of our Middle Eastern enemy.