Freelancers Union and Elance-oDesk took a self-proclaimed deep dive into how Americans are putting together their work-lives. The resulting report, Freelancing in America: A National Survey of the New Workforce, spells out the fact that one of the four major United States workforce trends headed our direction is actually hitting us head-on. That trend is the revolutionary rise of the freelance workforce. These facts may surprise you:

As these numbers continue to grow so will their economic and cultural impact. 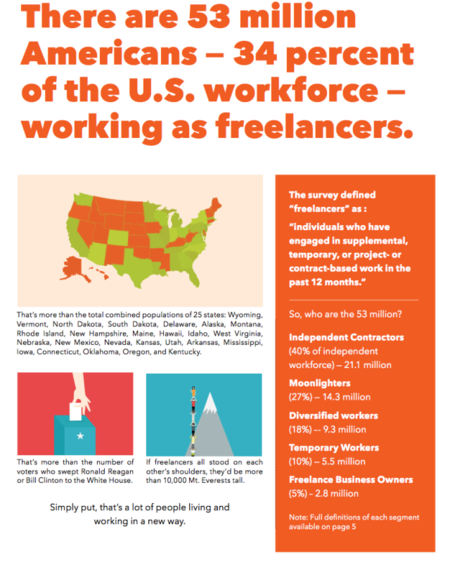 It's time to get to know your future workforce. One place to start is by understanding why they've walked away from the working world that's been the norm for so long. It's not easy to take the leap- what motivates them to freelance?

What is a Freelance Worker?

Let's start with the basics. What exactly is a freelance worker? In the Freelancers Union and Elance-oDesk study, Freelancing in America: A National Survey of the New Workforce, "freelancers" are defined as individuals who have engaged in supplemental, temporary, project-based or contract-based work in the past 12 months.

Why Do People Freelance?

It is often assumed that the freelance workforce grew simply because of the financial crisis in 2008 that prompted mass layoffs (8.4 million jobs), swallowing up pensions and more. Job security no longer existed so people had no choice but to find a way to succeed independently. Additionally, young people of the Millennial generation saw their parents get laid off and grew up with a deep distrust of organizations as a whole.

While the economic crash was definitely a launching pad for many workers to dive into the freelance workforce, that doesn't account for its continual growth. There are many advantages for working freelance, many of which would be impossible for professionals ten years ago.

Let's hear why people freelance in their own words.

1. They Prioritize The Family
Freelancing can help parents balance their career and family obligations by erasing the need to physically be in an office at a set time. This does more than help resolve scheduling issues, it eliminates the stigma parents face when they can't make late night client meetings or need to arrive late when their kid misses the bus.

Getting ready to go see my kid sing her little heart out at a school assembly! #whyIfreelance

Dancing in the backyard with the 2yo :) #whyifreelance

2. They Value Freedom and Flexibility While the picture of a freelancer siting on a topical island beach working on her laptop is a cliché, freelancing does leave room for individuals to choose their work environment. Setting your own schedule is a huge bonus. The night owls or early birds can work when they focus best. Independent workers aren't tied to a location either-- they can relocate when they want, for however long they want.

Reason #563 #whyifreelance: So I can put $5 in the jukebox, order a pitcher of beer and play pool...after midnight on a "school night."

3. They Don't Like the Office Culture They've Experienced
Imagine: No more moody bosses, long commutes, interoffice cliques, inconsiderate (or downright rude) coworkers, endless meetings, or webs of red tape keeping projects in limbo. When freelancers walk away from the traditional nine-to-five, they also walk away (hopefully!) from the common challenges that come with office life.

Ah the joy of a normal 40 min commute that becomes 90mins. #whyIfreelance

I used to have a boss who would get mad at the dept and our punishment was to change our desktop wallpapers back to default. #WhyIFreelance

Why bother scheduling a meeting if you're not going to show? #whyIfreelance #workerbee #officeproblems

4. They Want Control Over the Type of Work They Do Some individuals are drawn to the fact that they are in control of the type of work they do as freelancers. They can turn down projects they don't find satisfying, and seek opportunities more aligned with their values, purpose, and skills.

This week I have been mostly writing about wallpaper, cottage holidays, animal feeds and mountain bikes #whyIfreelance

Overhearing an interview at a fast food restaurant. "What are your life goals?" #whyifreelance #areyouserious

Reason #1 #WhyIFreelance: I love working on multiple projects. I am always most productive when I am avoiding getting something else done.

5. Higher Potential for Earnings and Success With a strict hierarchical structure often rapt with unintentional bias, the traditional corporate job can leave people feeling frustrated with their inability to advance and achieve. This especially holds true for minorities and women. We can't ignore the hordes of women who are leaving the corporate world to start their own businesses after hitting their head one too many times on the ever-present glass ceiling.

That book I found in 2005 that my bosses wouldn't read; someone made a $70 million movie from that author's other book. #whyifreelance

#Whyifreelance? because I have the opportunity to experience new technologies & embrace new methods on how to create good eLearning

The Value of Knowing Freelancer Motivations

It's interesting to note that many Millennials (workers under 35) have spent their entire careers freelancing. To them, freelancing is the norm. If you look at the fact that 40% of the current workforce is leaving as Baby Boomers retire, it becomes clear that organizations need to get on board with developing and managing a freelance workforce.

Understanding why people are drawn to freelancing can help hiring managers attract and retain the best talent for their teams. It will also help ensure that the freelance talent contributes positively to the organizational culture.

For example, let's say you are an organization that values work-life balance, and your culture accommodates growing families. A candidate motivated to freelance by the desire to be actively involved in his child's life would be a great fit for your culture.

If you've not yet managed a freelance worker, most likely you will soon. This is a seismic shift in the U.S. workforce and the time is now to prepare. Start by understanding the types of freelancers and what motivates them. Then take the time to learn how to best manage freelancers. While 53 million freelancers is a significant number, you ain't seen nothing yet.

How do you feel about the ever-growing freelance economy? Do you think it's a move in the right direction for individuals and for organizations? What needs do you see being met with a more temporary workforce? I'd love to hear your ideas. Leave me a comment below, send me an email, or find me on Twitter.

Anne Loehr is a sought after keynote speaker, writer, consultant and trainer. She helps leaders in large organizations connect their everyday decisions today to the future workplace. Her end goal is to help organizations retain their top talent and not only survive, but thrive. To learn more about Anne, check out www.anneloehr.com or follow her on Twitter.