When Olga Murray went to Nepal in 1984 she met the children who inspired the founding of her organization, The Nepal Youth Foundation (NYF). As she camped atop a mountain, watching a group of local children struggling to study by lantern on a crude plank table, she realized what she wanted to do with the rest of her life: help Nepali families gain access to better education and resources.

Since that trip, she has returned to Nepal every year except one, and now spends half of each year there. She considers it her second home. And slowly, but with determination and constantly inspired by the Nepalese children who are so eager to learn, she has forged The Nepal Youth Foundation.

Within a few years of her first trip to Nepal, Murray had gathered about 80 sponsors and formed the official non-profit. At first a simple initiative to better educate Nepalese children, NYF is now a comprehensive and sophisticated foundation offering multiple programs and contributing to the greater society. Major projects include a full scholarship program that takes recipients from kindergarten through medical school, two small children's homes, 14 hospitals for malnourished children, and a flourishing program (The Indentured Daughters Program) to abolish child slavery in Nepal. NYF has also launched two counseling centers -- one for vocational counseling and another for psycho-social counseling. 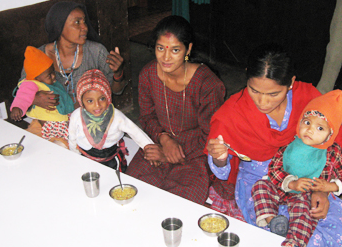 (Permission to use photo courtesy The Nepal Youth Foundation)

One of NYF's most successful programs is called Child Mother Pairs. In conjunction with the Nepalese government, they have founded hospitals which act on charity donations to provide a full month of care and training to a mother and her child for only $250. This program brings malnourished and sick children back to health, trains their mothers in their future care, and then trains mothers to train other mothers to do the same. It's a genuine community education endeavor which extends beyond the hospital walls and is making an impact on the health of families throughout the communities by promoting childcare and nutrition education on a grassroots level. Of this pioneering program, Olga Murray says: "They get everything they need. Medical care, counseling, healthy food and water, large beds so they can stay with their children -- all for $250 a month. We have also just built a center just outside Kathmandu, where we are building a library, hiring dietitians to educate the Nepali mothers, and starting village outreach programs."

Much of what NYF does is raise awareness within the Nepalese community, teaching proper childcare and nutrition. But through their Indentured Daughters Program, they have also saved over 12,000 girls from forced labor. It has been common practice in Nepal for children to be bonded away as labor by their parents for as little as $50 a year. But the Indentured Daughters Program is saving lives by changing minds. "We were able to change the mentality of the people," says Murray. "We are turning the community against the custom, so that this will be the last generation of girls that will be sold. It is no longer okay to send your daughter away; it is now looked at by the community as shameful." The program -- which has included a massive nationwide awareness effort including street campaigns and lawsuits -- has been very successful at freeing girls from bondage as well as irradiating the custom at its root level.

NYF is a four-star Charity Navigator charity, and is able to send 81 percent of the money they raise to directly benefit needy children in Nepal. Only 19 percent is spent on fundraising, and with a $2 million budget in 2011, this is no small achievement. NYF stands as one of, if not the best charity available to donors wishing to help the children of Nepal.

As I write this, on the eve of Mother's Day 2012, I can't think of a better gift to support the beauty and sanctity of motherhood and make a real difference to a mother and her child. I applaud the work and life of Olga Murray, and hope one day to have even a sliver of the success she has had in making a difference to the people of Nepal and beyond. She turns 87 on May 30, and when I asked her if she would have done anything differently, she said, "I just wish I started sooner."

This Mother's Day, or any day for that matter, perhaps this is the perfect gift.