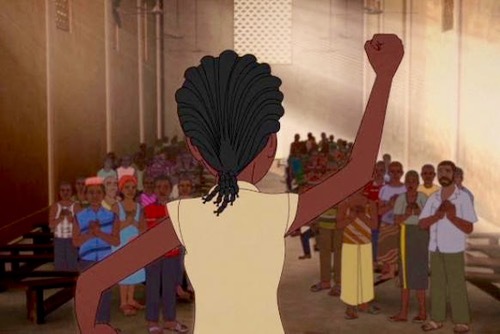 It was less than a year ago that the Ebola virus took control of the 24 hour news cycle and the world watched, horrified, as it killed more than 11,000 people globally. Until the disease reached the shores of the United States, it was of little interest here. The countries of Sierra Leone, Guinea and Liberia bore the bulk of the epidemic, and even as it seemed that aggressive action on the part of health care organizations had stopped its progress, the virus left a legacy of fear in those African countries. It is still smoldering. The Sierra Leone epidemic officially ended in November 2015, but in January 2016 a new case was reported after a deceased 22-year-old woman tested positive for Ebola. Her aunt developed symptoms and also tested positive. No further cases were reported, and the aunt recovered.

How do you fight an infective agent that is shrouded in mystery? It is too small to be seen with a microscope, but can multiply exponentially within the cells of its host. There is a new video that embodies courage, intelligence and savvy prevention in the character of a young woman who has lost her brother to Ebola. This animated story is beautiful to watch, uplifting, and offers a female heroine who is more than a match for the fear, misinformation and prejudice. By offering a window into West African cultures and the challenges faced there through the eyes of its hard-to-resist heroine, this animated project would also be an excellent addition to classrooms in the United States.

United Methodist Communications in Nashville, UNICEF Togo and Canada's Chocolate Moose Media have produced and are distributing "Ebola: In Praise of Prevention," to help educate people in Ebola-affected and Ebola-prone areas.

The young protagonist is a Supergirl who personifies courage and explains the triad of prevention, diagnosis and treatment of the disease. Wild animals can transmit Ebola to humans who can then spread the disease through person-to-person transmission. Contact with the body of a deceased person can also play a role in the transmission of Ebola. According to the World Health Organization, raising awareness of risk factors for Ebola infection and protective measures that individuals can take is an effective way to reduce human transmission.

English and French translations of the video are being distributed throughout Togo, Liberia, Sierra Leone, Nigeria, Côte d'Ivoire and other African countries, with additional languages and dialects planned. The video can be viewed and downloaded free of charge.

The soundtrack is sung by Grammy Award-winning singer and UNICEF Goodwill Ambassador Angelique Kidjo and was composed by Canada's Andrew Huggett. Benin's Kidjo won the best world music album of the year at this year's Grammys in Los Angeles. Revered as one of Africa's most beloved musicians, Kidjo won the award for the second consecutive year.

The voiceover of the main character was done by Jasmine El Mulki, who works at Chocolate Moose Media. A passionate defender of the environment and human rights issues, El Muki has been an Associate Producer with the Academy Award winning independent film production house BreakThru Films in London.

In Praise of Prevention is the second in a series of animated video shorts by Chocolate Moose Media focusing on Ebola in West Africa. It is designed to prevent the next outbreak of Ebola from ever happening.

Chocolate Moose Media, was founded by humanitarian Firdaus Kharas. Kharas introduced the term "Culture Shift" to the humanitarian lexicon in an effort to teach children and young adults about the human condition with a global emphasis. Distribution channels include many international organizations, non-governmental organizations, civil society and churches and through social media using the hashtag #Ebolavideo

For more information on Ebola, see this fact sheet, a timeline of the outbreaks, and this data set.