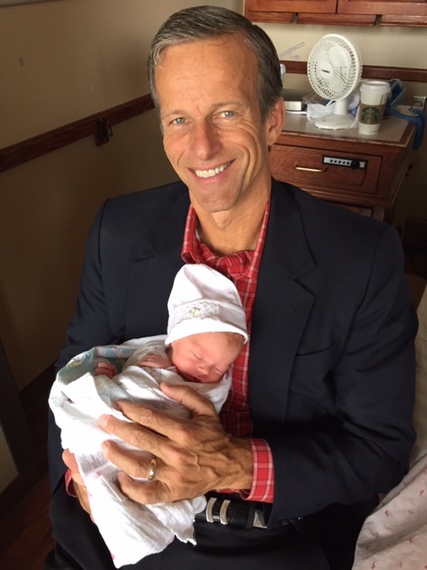 There are many things in life over which you have no control. Kimberley and I just experienced one of them. On September 21 at 8:24 p.m., we became grandparents for the very first time. That's when Henley Joy Hargens made her debut. All we had to do was show up. Actually, it's not quite that easy. You do have to raise kids of your own. That, in and of itself, can present its own set of challenges.

Still, becoming a grandparent doesn't involve a lot of effort. Of course, you do have the heavy responsibility of adding to the conversation about whose ears and eyes or hair that little one has. As if that can be determined after one hour on the planet. Or other important matters, like whether your new granddaughter will someday be able to run the quarter mile in under 60 seconds, or sing like Auntie Brittany.

Mostly though, you sit back and soak it in. You look at that little girl who you held when she was born now holding a baby girl of her own. At that moment, you are overcome with the emotion you felt nearly 27 years ago when your baby girl entered the world. It's the kind of thing that can turn the most stoic of Scandinavians into blubber. I'm feeling it again as I write this.

You think about how busy life got. How the days and weeks turned into months and years. How sometimes those years all seem like one big blur. And then there's that moment where you look into your granddaughter's eyes and you see the past meet the future. For a brief instant, it's as if time stands still. Everything is crystal clear.

Being a parent is the ultimate lesson in self-sacrifice. The beauty of that is it reinforces an important principle -- that it's not about you.

Scott and Larissa are probably as prepared as you can be for parenthood. By that, I mean they have the essentials -- car seat, crib, stroller, etc. They know how to change a diaper. They're committed to the task. That said, there's no way to truly prepare for parenthood. A friend of mine describes it as being thrown into boot camp. You can't eat when you want to, or shower when you want to, and someone is always screaming at you. That may be bit of an exaggeration, but you get the point.

Your life, or at least your time, is no longer your own. Being a parent is the ultimate lesson in self-sacrifice. The beauty of that is it reinforces an important principle -- that it's not about you. You realize that your purpose in life is now wrapped up in that child's well-being.

There will be some hard days ahead for Scott and Larissa. The journey they've embarked on is filled with highs and lows. There will be celebrations, disappointments, worry, stress, joy, anxiety and pride. But they are in for the ride of their lives.

When we left her hospital bed, I squeezed Larissa's hand, kissed her on the forehead, and told her we loved her. It felt at that moment like I was passing a baton. It's time now for them to run the race. As for grandma Kimberley and me, you will see us coaching and cheering from the sidelines. That's what grandparents do.