It may be the biggest thing in medicine in a long time. It's not a new drug, or therapy or discovery. Instead it's a new way of doing clinical trials which could have a dramatic effect, particularly on those diseases that get less attention.

Initially it is aimed at the deadliest brain cancer, glioblastoma multiforme, known as GBM. From diagnosis, it can kill in about six months.

Traditionally clinical trials test one drug or a therapy on a lot of patients, sometimes thousands, against a control group that is treated with a placebo, or not treated at all. Trials drag on for years.

The aim in clinical trials, which are certified by the Food and Drug Administration and reviewed by FDA-appointed panels of experts, is to make sure that a drug, medical device or procedure is safe and effective. This system costs a huge amount of money -- hundreds of millions of dollars -- and takes years. It produces no collateral knowledge; and it doesn't alleviate the suffering.

Also, it's an imperfect system. When a drug or medical device is certified for sale by the FDA, it may be less effective than the manufacturer claims, or not safe. Witness the recalls and lawsuits against drugs and medical devices -- like the ones against Avandia, the diabetes drug, and transvaginal mesh.

This form of testing is totally inappropriate for virulent diseases, where the cohort being tested is unlikely to live long enough to find the results.

That stark truth has driven a global fraternity of specialists in brain cancer to set up a new concept in clinical trials. These doctors, neurosurgeons, neuro-oncologists, biostatians and genetic researchers are out to make trials a present-tense matter.

Members of this fraternity of researchers and clinicians come from around the globe with a heavy emphasis on the United States, China and Australia. They gathered in Washington last month to launch their trial, known as GBM AGILE, an acronym for Adaptive Global Innovative Learning Environment.

They are driven by the knowledge, as Anna Barker, GBM AGILE project director, put it, that the present treatments for GBM "are unacceptable."

She told me that there has been little progress over the years. Other doctors told me that the three treatments used at present -- surgery, chemotherapy and radiotherapy -- aren't saving patients. Few survive, or have their lives appreciably extended.

Barker is a professor at Arizona State University, a former deputy director for strategic initiatives at the National Cancer Institute, part of the National Institutes of Health, and a crusading force for improvement in brain cancer treatment, as well as how clinical trials are conducted.

Webster Cavenee, a professor at the University of California at San Diego, said the drug that is used for treating this aggressive cancer doesn't work because the cancer, which doesn't metastasize, becomes resistant to it in a short time, rendering the procedure useless. "We need a cocktail of drugs," he said, "so that the cancer is deceived."

The FDA, often seen as a barrier to new treatments, is on board with GBM AGILE and has promised to approve new procedures within days, according to Barker.

The work to get the trials set up is already well underway. More than 100 cancer specialists, divided into 10 major committees, are working on the structure.

As I understand it, GBM AGILE will establish a global pool of patients whose physicians will report on therapies, drugs and environments that succeed or fail, building a huge database of clinical knowledge. Patients will cycle out, hopefully because they are cured, but sadly, more likely, because they've succumbed. The organizers call it "crowd-sourcing knowledge." 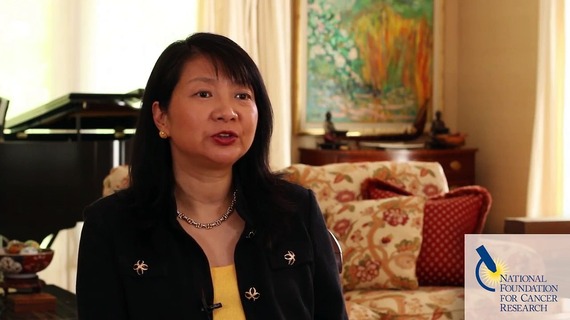 Helping with GBM funding: Sujuan Ba of the National Foundation for Cancer Research

It is hoped that major funding will come from big foundations and charities. But initially the institutions that will participate have been defraying expenses, with an important assist from the small but energetic group, the National Foundation for Cancer Research, whose president, Sujuan Ba, has played a role in bringing in Chinese research institutions.

In the lay language of today, there won't be any stovepiping, less repetitive prescribing of doubtful treatments, and a greater sharing of the patient experience.

Vice President Joe Biden is an enthusiastic supporter. His beloved son, Beau, died from GBM. Biden told the gathering of BMG AGILE founders in Washington that if Beau hadn't contracted the disease, he would've run for the presidency. -- For InsideSources