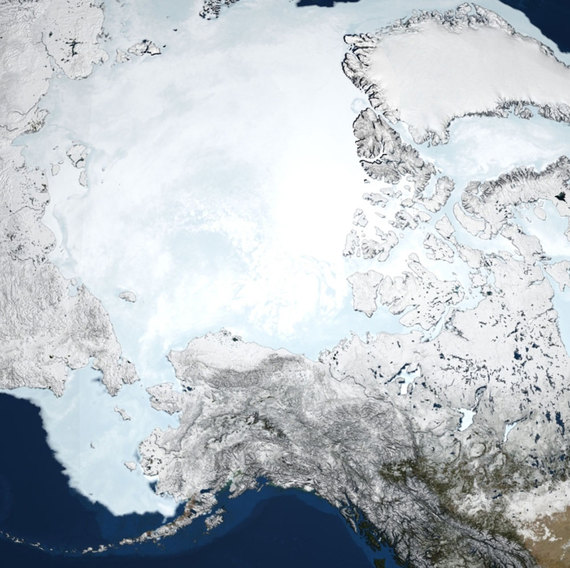 This image is based on data from NASA's Aqua satellite showing the extent of sea ice in March 2008. Credit: NASA

The United States has assumed the Chairmanship of the Arctic Council from 2015 to 2017, and recently announced its term agenda at the Arctic Circle Assembly in Iceland, with three main thematic areas: improving economic and living conditions in Arctic communities; Arctic Ocean safety, security and stewardship; and addressing the impacts of climate change. In four previous #ArcticFuture posts I have reviewed my impressions of the Iceland deliberations and the underlying pull of economic development that influences the political agenda and competitive actions by Council member states, observers, and others whose interest in minerals, oil and gas, shipping, and fisheries remain real and potentially dangerous for the stated goals of this international collaborative endeavor.

In our last post I questioned the role that the United States might play during its two-year period of Council leadership. I am optimistic, and here's why.

According to the U.S. program for the two-year chairmanship, specific objectives by theme are described as follows:

Theme 1
LIVING CONDITIONS: Promote the development of renewable energy technology, such as modular micro-grid systems, to spur public-private partnerships and improve energy affordability; Provide a better understanding of freshwater security in the Arctic, including the creation of a Water Resources Vulnerability Index; Coordinate an Arctic-wide telecommunications infrastructure assessment to promote the build-out of commercial infrastructure in the region; Support mental wellness, including suicide prevention and resilience; Harness the expertise and resources of the Arctic Economic Council to inform the Arctic Council's work on economic and living conditions; Mitigate public health risks and reduce black carbon output in Arctic communities; Promote better community sanitation and public health by facilitation and collaboration between industry, researchers and public policy experts to increase access to and reduce the operating costs of in-home running water and sewer in remote communities.

Theme 2
ARCTIC SAFETY and STEWARDSHIP: Better prepare those responsible to better address search and rescue challenges in the Arctic; Ensure marine environmental protection, including working toward the establishment of marine protected areas; Explore the creation of a Regional Seas Program of the Arctic Ocean; Create a better understanding of Arctic Ocean acidification and its effects on organisms and the economies that rely on them; Encourage all parties to take the steps necessary to allow for the proper implementation.

Theme 3
IMPACTS OF CLIMATE CHANGE: Target short-lived climate pollutants through reductions in black carbon and methane emissions; Create a Pan-Arctic Digital Elevation Map that will increase our understanding of the impacts of climate change on shorelines and surface areas in the Arctic.

These initiatives are much further detailed in the goals and objectives of the U.S. Arctic Research Commission published in May 2015 and describing the specific studies to be conducted to gather knowledge in all these areas for their successful application. It's all good.

Note that almost all this work is targeted toward adaptation to the impact of circumstances generated far away on the particular ecosystem and people who live there -- by the consequences of global consumption, the exploitation of natural resources, and climate change on the health of the environment and the welfare of the communities within it. Note that almost none of this pertains to the underlying challenges of economic development in the Arctic, in the form of minerals, oil and gas, shipping, or fisheries.

So what to conclude? If one is a conspiracist, then all of this is a cover-up for the real agenda by which the world can get at the natural resources of the region. If one is a strategist, then all this is a clever diversion away from the underlying development motivation. If one is an optimist, then all this is good, meaningful work that will enhance the quality of life of Arctic inhabitants through health, education, social services, and training for new employment. If one is a visionary, then all this might be the foundation for a new idea, incorporating the best of the successful Antarctic Treaty in the south with the best interests of regional inhabitants in the north -- a New Arctic that conserves and sustains the best of this astonishing place for global benefit in the 21st century.