Fewer things are as enthralling as learning that a material is few moments away from being "alive." The expanding definition of "life" or "alive" is not only a consequence of joyful abuse of language and metaphors, but also the outcome of an increasingly able gaze upon the things that make -- and with which we make -- the world we supposedly know.

This is how I originally met Zbigniew Oksiuta near one of his gelatin-based spheres, thinking of how water could now again breed life into this structure. Make it sprout -- or decay.
Zbigniew Oksiuta is an artist, architect, and scientist, interested in the possibility of designing biological structures, whose work combines architecture, biology, physics, and genetic engineering.

Originally from Poland, he currently teaches in the School of Architecture at Rensselaer Polytechnic Institute (RPI), in Albany, N.Y., and produces and exhibits work in several countries across the globe.

I asked him about some of the main themes in his publications.
(Interview continues below)

How do you see decentralization and autonomy in the context of the design of material forms?

In the living systems, local laws make global order. All organisms breed in local environment, even animals which migrate globally. The genome drift, which is the "most powerful impulse in nature", presses as dough on a sieve of local environment. The best locally adapted organisms survive and pass on their genes to next generations. Locality is a source of diversity.

The motto of David Brower and Buckminster Fuller should be changed to "act locally and think locally". Not long ago, architecture was created on these principals. I remember that from my childhood. I was born in a small village in Eastern part of Poland, on my grandfather's farm. We produced everything locally and we were almost self-sufficient. My ecological footprint was at that time 0.8 ha. Now I need 10 times more.

Decentralization is the quintessence of the biological future, but this vision has nothing to do with romantic wish back to the nature. "The Sun, the Genome & the Internet" as Freeman Dyson wrote, are the forces that can make local autonomy possible.

You have a particular interest in water but also in other fluids. What is the potential you see in these materials and how do you further equate them with the concept of a fluid architecture?

I am interested in liquids because they are in shapeable state of matter. In solids, cohesive forces cause particles to have defined, unchangeable positions. Gasses on the other hand are boundless and do not create shapes or forms. Liquid state is the only one that allows self-organization processes, and the only state that allows for life, as we know it.

Living organisms are autonomous self-replicating systems. Their activity depends on internal chemical processes and reactions to external environmental stimuli. Internal structures are the proteins produced on the bases of directives from the genes. Complexity of live processes requires enormous precision in transfer of information. For this purpose, evolution uses linear conductors like long molecular and polymer chains. Almost every human cell consists of a 2- meter-long DNA.

The key to biological architecture is material science and the main aim of the research are biological polymers, which can create new unimaginable possibilities. As solids they can serve as structural elements. As liquids and gels they can become new kind of architectural soil and help to maintain biological processes such as growing plants, or microorganisms on and in the building matter.

Purely liquid forms in the architectural scale are possible only outside the gravitation field. On the Earth's surface, where gravity is unavoidable, hybrid objects combining liquids with solid matter like gels, foams and bones will be possible.

How is your concept of biological habitat connected to visions of future growth for humans and the earth?

A contemporary challenge is to acknowledge and respect the potential of information embedded in matter. Our formal "heat, beat and treat" methods of producing structures do not take into consideration the information contained in the materials.

The vision of habitat based on biological principles, making it literally alive as an organism, such as a tree is challenging. A house that dynamically reacts to the environment on the molecular level will be part of the future.

Can you imagine being in the transparent sphere made not from black humus, but from transparent polymer? In this maximally condensed introversive garden, your personal biosphere, a variety of organisms, similar to the plants, animals and people that existed on my grandfather's farm, would be living together.

Zbigniew Oksiuta's website
http://www.oksiuta.de/index.html;
All images in gallery credited to authors, and obtained to this article with the courtesy of the artist. 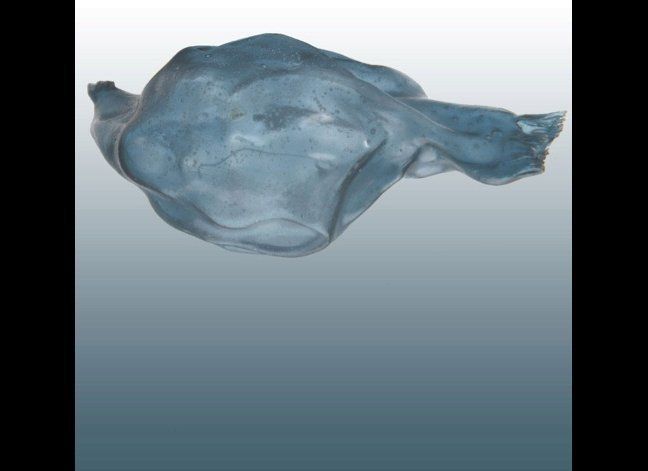 1 / 8
FORM AS PROCESS
Zbigniew Oksiuta FORM AS PROCESS, 2002 An originally spherical form after several spatial deformations and invaginations. The forms ware made of biological polymers obtained from animals and plants, such as gelatin, agar, and starch. They are edible and have various flavors and smells. Chaotic curves and fractal deformations are the effect of precise biological self-organization processes combining the physical and chemical principles of order and beauty in the animated world. Source; Forms, Processes, Consequences, Zbigniew Oksiuta, Catalogue, Arsenal Gallery, Bialystok and Centre for Contemporary Art Ujazdowski Castle, Warsaw, Poland, 2007 © Copyright by Zbigniew Oksiuta & VG Bild-Kunst Bonn