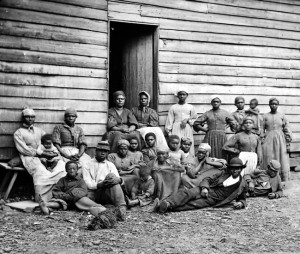 Photo courtesy of I Was A Slave

The idea of reparations is not new. Yet, in today's presumed colorblind and post-racial society, many white Americans are convinced that the enduring legacy of racial inequities facing the black community are best remedied by individual responsibility and personal accountability; that is, if African Americans would simply work harder by "pulling themselves up by their bootstraps" and stop pulling the so-called "race card," they might actually get ahead and finally lay claim to the ever-elusive "American Dream." In other words, from a white person's point of view, reparations for the 346 years of chattel slavery and near-slavery like conditions of Jim Crow racism involves a call for black Americans "to do for themselves." Black folk need to get their moral house in order.

Most whites profess individual responsibility as a means to success or failure. By ignoring the paradox that the failure of black Americans is attributed to individual responsibility, white Americans (and bright Americans) neglect to acknowledge the crippling effects of centuries-old white racism and contemporary forms of institutional prejudice and discrimination. Additionally, this shared, group-based understanding -- implying that whites work hard while blacks apparently do not -- is seriously misguided and has significant consequences for African Americans. Given the historical context of racial oppression and current white-controlled industries, white notions of merit-based success ensures that black Americans linger in a perpetual state of marginalization keenly visible across a broad spectrum of institutions like healthcare, education, housing, employment, politics, and other major domains of society.

Like white Americans, black Americans want the necessary resources to allow their children good health and achievement in life. Superior education, access to decent employment and quality health care are key among other requisites identified by a variety of sociological, epidemiological, public health, educational and social science research as important factors that influence the overall health and well-being of a society, its communities and its individuals. It is time for the nation to take responsibility for the current state of affairs for scores of black Americans living on the fringes of obsolescence. A simple three-part plan calling for group recompense will address the central racial disparities that remain trenchant within the black community and American life. With this, the US will finally offer a tangible solution to challenge the systemic conditions of deprivation known all too well by the black community.

First, we must concede that formal education is key to some semblance of full participation in US society. The problem with education, in part, stems from how schooling is unequally funded, often punishing poor white, black and brown children for their inherited circumstances in life. The most nefarious of abuses to blacks occurs in public education as they are divested of the opportunity to be educated on their terms in ways that foster success, which begins with healthy racial identity development and positive affirmation that blackness matters. When American schools began the slow and violent process of desegregation after 1954, African American students were expected to close black schools and attend historically white schools. It was hoped that by placing black students next to white students, school achievement would effortlessly improve. Instead, jobs for thousands of black teachers and administrators throughout the south were eliminated, and black students were placed into an unequal structure where they encountered a predominately white, middle-class, female teaching profession racially-primed to view blacks through a deficit lens for generations to come. This white racial frame of black inferiority lends itself to present-day microaggressions toward black students (especially black males), who are severely mistreated, misunderstood and overly pathologized in public education. This not only hinders the possibility of equal education, but it exposes the fallacy of integration. These historically white institutions were never formally prepared or adequately resourced to meet the needs of black students, and the intermingling of blacks and whites occupying the same space in no way assured equality. Currently, blacks attend under-funded urban schools in considerable numbers (ironically re-segregated from whites). Most of these urban schools are nothing more than holding pens more akin for prison preparation rather than substantive schooling for collegiate preparation. Education for African Americans and their progeny should be equally funded and staffed to those of the best public schools in the nation, and students should have the benefit of free public education through their collegiate years.

Secondly, African Americans should receive free necessary health care in all areas of life. As evidence-based research documents, protracted exposure to chronic psychological stress is shown to be physiologically and mentally corrosive for health and well-being. More importantly, exposure to race-based discrimination at the institutional and interpersonal level of society, coupled with grinding inequalities in housing, jobs, education and income parity, keeps the body's stress response in a constant state of arousal. Disease does not exist in a vacuum. The historical domination and complete disenfranchisement of black Americans in a so-called integrated and free society gives rise to a perfect storm for disease formation deep within the cells and biological pathways of the body. Because black Americans report higher levels of racial discrimination in a number of supposedly fair and impartial institutions, they are more vulnerable to pre-mature disease in the form of high blood pressure, obesity, diabetes, certain cancers, cardiovascular disease and other serious health-related consequences.

Like black children exposed to the whiteness of public education, black Americans have, likewise, been exposed to a two-tiered racist healthcare system. Not too long ago, "Black disease" was considered inherent to being black rather than the cause of dehumanizing forces of systemic white racism. As health care providers pledge an oath to treat all patients equitably and with integrity, how is it possible that health disparities remain a major concern for communities of color? To lesson the burden of disease for African Americans, they should be given federally-sponsored health care and unencumbered access to high quality health care delivery services. This would allow black Americans to gain substantial ground toward group uplift with the elimination of race-based health disparities.

And finally, African Americans need to be economically empowered with the resources necessary to provide a meaningful existence and future. Black Americans, as a group, have long been denied access to wealth and wealth-generating opportunities. Between 1619 and 1865 alone, black people were robbed of millions of dollars in wages for over 222 million hours of forced labor. After 246 years of chattel slavery along with another 100 years of Jim Crow, white racism has taken a toll on black folk of all stripes -- young, old, rich, poor and everything in between. To this day, blacks have considerably less personal wealth than even poor white Americans and other Americans of color. The debt owed to African Americans is severely underestimated and long overdue. Therefore, all blacks should be exempt from federal taxes for a minimum of 346 years or until the poorest black American has equal parity with the poorest white American in terms of employment, income, wealth accumulation, and improved educational and health-related outcomes.

It is well known that white people have a strong aversion to the idea of a "free ride." Yet, white America has an extensive and bloody history of taking what it wants with no thought or concern for the lives of Native Americans, black folk and other Americans of color. White supremacy is alive and robustly active still in North America. If the practice of segregation was bad, the illusion of integration has been misery. African Americans are literally dying from the stresses of an unrelenting and uncaring white power structure. This three-part plan will allow black Americans the time to heal their communities and regain some sense of control and destiny in their lives.