Less than a decade ago, the New England Cottontail, the inspiration behind the popular children's book character Peter Cottontail, was destined for the Endangered Species List. Thanks to the efforts of a broad coalition of conservation partners and the leadership from the states of Connecticut, Maine, Massachusetts, New Hampshire, Rhode Island, and New York, today the New England cottontail is coming back.

Just last week I was privileged to join Secretary of the Interior Sally Jewell, U.S. Fish and Wildlife Service Director Dan Ashe, New Hampshire Senator Jeanne Shaheen, Natural Resources Conservation Service Chief Jason Weller, state wildlife agency directors, and partners from across the Northeast to announce that as a result of ongoing and planned conservation actions, the New England Cottontail has been taken off the list of species under consideration for protection.

This is good news -- and not just for the rabbits. Conserving habitat for the New England cottontail also enhances outdoor recreational opportunities in one of the country's most densely populated areas, improving residents' quality of life and providing increased tourism and recreation-related support for local communities. In addition, at least 65 other kinds of wildlife also depend on young forest habitat, including woodcock, prairie warbler, eastern towhee, catbird, bobcat, box turtle and the frosted elfin butterfly. 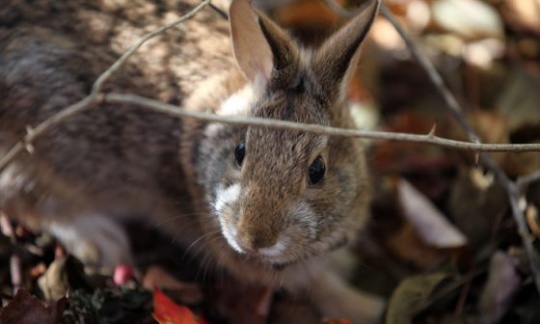 The New England cottontail's remarkable return is a testament to the benefits provided by the Endangered Species Act to both listed and non-listed species, as well as the people and communities sharing the landscape with them. For some, such as Rick and Donna Ambrose, conserving wildlife is simply an extension of good land management. The couple has cleared about 10 acres of their property in Dover, N.H., removed invasive plants and planted shrubs to support the cottontail effort on their land. Rick also has helped other landowners with habitat restoration through his excavation business. "We have always had an appreciation for the wildlife that abounds on our property," he says. "If our participation convinces other small landowners to commit to wildlife habitat restoration, then the natural effects will become evident and our participation will be purposeful."

Guided by the ambitious New England Cottontail Conservation Strategy, partners have invested in habitat management and land acquisition, research, monitoring, and outreach related to young forest restoration, such as assisting private landowners with managing habitats on their lands. Flexibilities within the Endangered Species Act have supported these efforts and enabled the U.S. Fish and Wildlife Service to determine that with the continued investments outlined in this plan, the species no longer faces the threat of extinction.

More than 18,000 acres of young forest habitat are now or will soon be available for the cottontail in priority focus areas, and this successful partnership is on track to reach 27,000 acres by 2030. For the first time in history, we've successfully bred and raised more than 150 New England cottontails in captivity and released them at multiple locations.

The cottontail's story exemplifies how the Endangered Species Act can and does work -- as a safety net of last resort, when necessary. But more commonly, as a catalyst for partnership-driven conservation efforts that improve the health of our lands and waters for both people and wildlife.

Far from being the economic burden that some opponents of the ESA allege, the ESA provides flexibility so that local communities can come together to improve the health and productivity of the land, contribute to economic prosperity and strengthen tourism and recreation-based economies.

The cottontail partnership is just one example of how we can collaborate with a broad array of stakeholders to tailor cost-effective solutions to the needs of the species and local communities. Through the Working Lands for Wildlife Initiative, the Departments of Interior and Agriculture are using voluntary incentives to collaborate with landowners across the nation willing to conserve at-risk species including the cottontail, eastern bog turtle, golden-winged warbler, gopher tortoise, greater sage-grouse, lesser prairie-chicken and southwestern willow flycatcher.

Together with our state and other partners, we've come so far. We have helped write a new chapter for the New England cottontail, and through continued efforts to strengthen and improve the Endangered Species Act, we can do the same for other imperiled species across the country. In the end, their story and our story are one and the same.