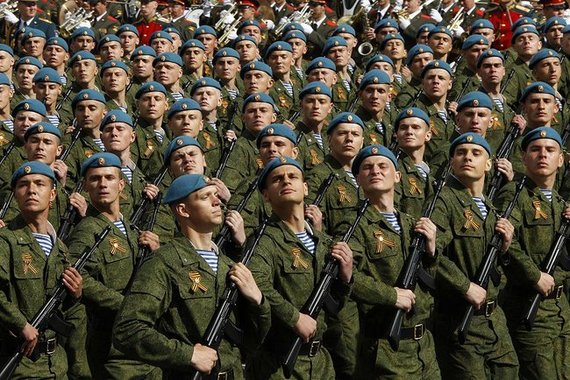 Image: A Russian military parade dedicated to the anniversary of Victory in the Great Patriotic War (1941-45). Author: Kremlin.ru

News coverage of the trial of a Russian soldier accused of killing all seven members of an Armenian family in 2015 has revived the issue of Russian neglect and mistreatment of its troops.

The question of Russian troops having to beg for money for food surfaced in media discussions of Private Valery Permyakov's motive for killing the Avetisian family at their home outside the Russian military base at Gyumri, where he was stationed.

The trial, which is still under way, has yet to bring out a reason why Permyakov, who has a history of mental instability, killed the family, including a six-month-old child.

At one point, those investigating the crime said Permyakov entered the family's house to get a drink of water. How they obtained this information has not been revealed.

At the trial, Permyakov gave a different account of why he entered, saying he needed a place to change his uniform.

News organizations covering the trial used investigators' contention that he was looking for water to discuss the problem of Russian soldiers panhandling in Gyumri.

The panhandling mention was brief, but spoke volumes.

An overriding impression was that if Russian soldiers were begging in downtown Gyumri, they must be short of food and drink.

One news account said that, in 2015, Gyumri assigned additional police to places where there is heavy foot traffic. The implication was the city had done so because of soldier panhandling.

The issue of Russia neglecting or mistreating its soldiers has generated headlines a number of times since the country became independent in 1991.

But it's even more relevant today as Russia deploys troops on military adventures in Ukraine and Syria, and to bases across the former Soviet Union, including Armenia.

Armenia has essentially become a colony of Russia, relying on it for natural gas, electricity and military protection. It is learning, however, that this kind of servitude comes with a price. The panhandling Russian soldiers in Gyumri is just one example.

Not a week goes by without Russian news organizations trumpeting the country's decision to spend billions of dollars to develop new warplanes and other weapons. It's all part of a military-hardware modernization program that Russian President Vladimir Putin is making sure the world knows about.

Russia's recent news coverage of the military has not focused on the fate of the average soldier, however.

The Gyumri soldier-panhandling accounts conjure up past neglect and mistreatment of Russian troops that -- given Russia's current dwindling national revenue -- could be on the upswing again.

Both Russian and Western news organizations reported in the late 1990s that soldier-panhandling was rampant across Russia. That was a time of recession, and news accounts said suppliers were refusing to provide the military with food because they had not been paid for previous shipments for months.

Food has also figured in other accounts of Russian-soldier neglect or mistreatment since the 1990s.

Russia has both Interior Ministry as well as military troops, and a Russian whistleblower generated international headlines in 2011 by posting a YouTube video contending that some Interior Ministry troops in Russia's Far East were being fed dog food.

The ministry denied the account of Major Igor Matveyev, who was drummed out of the service for going public with his accusation.

Matveyev maintained that Interior Ministry troops in Vladivostok were being fed a stew whose meat content was actually dog food. He said labels on dog food cans had been replaced with labels listing the contents as "premium quality beef."

The ministry's denial was quick and forceful.

It said its forces in Vladivostok included security dogs, and that cans of the meat that the troops were eating were stored in the same place as dog-food cans. But there was no labeling switching, it said.

Russian troop provisioning generated global headlines again in 2013, when soldiers stationed at another Far East outpost said they had had to eat maggot-infested food for a month. To prove their claims, some of the troops on Kunashir Island took pictures of food crawling with the insects.

"My son has served in this base for half a year, (and) he has lost 10 kilograms," a woman complained on the Internet. "Packages take two months to reach Sakhalin (the region where the base is), and not everyone has the money to buy food in shops. The life and health of soldiers and officers are obviously not important for the Sakhalin region's military leadership."

In the quarter of a century since the break-up of the Soviet Union, there have been many reports about mistreatment of Russian troops, particularly hazing deaths of recruits.

The military has blamed the deaths on a few bad apples.

The issue of the military providing its troops with so little food that they have to panhandle can't be blamed on a few misfits, however.

It is a failure of the system -- and the military's top leaders should be held accountable for it.

If the problem is rearing its head again outside Russian bases such as Gyumri, it can only get worse as the Russian military stretches itself thinner to accommodate its leaders' lust for combat adventures.