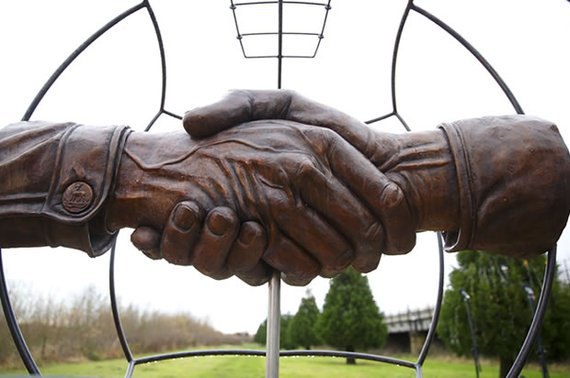 This week commemorates the 100th anniversary of the famous "Christmas Truce" of World War I -- a brief event that took place on Christmas Day in 1914 when German and British soldiers were compelled to participate in a series of ceasefires along the Western Front. Reportedly, the soldiers put aside the differences of their warring nations and sang carols, collected and buried their dead, exchanged gifts and even played "football" games in No Man's Land with impromptu soccer balls. It was one of the few bright spots -- as one German soldier wrote, a "fantastically unmilitary" event -- during what was otherwise one of the darkest times in human history.

In light of the recent events we've experienced in 2014 here in America and abroad, I propose that we need another Christmas Truce. The times, battlefields and warring sides have obviously all changed -- there are no longer huge armies fighting each other along a stagnant front, and no longer the doomed soldiers running point blank into machine guns on the hills -- but we certainly still have our own modernized battles. In the past year we've seen our nation's military -- the largest and most powerful in the world -- fighting not other countries, but rather terrorist groups peppered around the Middle East. Here at home, we've become a nation fighting itself -- our local police forces now roll tank-like vehicles through our streets, and guns can end up in the hands of inexperienced policemen or criminals.

But if soldiers in the trenches -- who were fighting the biggest war at that time -- were able to take at least a few hours to see beyond their conflict, to see the bigger picture and stop trying to kill each other, then why couldn't we? We are at one of the most advanced, knowledgable and cultured times in human history, so are we not capable of also showing the humanity that was displayed by warring soldiers 100 years ago? Even Rep. Joseph Crowley (D-NY) introduced a symbolic resolution to Congress this month to commemorate the 100th anniversary of the Christmas Truce, citing his own personal family connection to the event. "The Christmas Truce has always inspired me as a reminder that it is possible for opponents to look beyond their differences and see each other as people," he said. Naturally, Crowley's resolution was not taken up before Congress adjourned for the year.

And perhaps a Christmas Truce isn't even enough. As Rob Hughes wrote in the New York Times this week, after 1914 The Great War raged on for four more years, resulting in over 16 million dead. Furthermore, by the following Christmas, the act of such a truce became punishable by court marshall. And of course, ironically, the brave soldiers of The Great War -- as well as the motivated citizens who backed them in their home countries -- all thought they were fighting "the war to end all wars." Instead, the war directly or indirectly sparked even more conflicts that would permeate throughout the world over the next 100 years, from the heart of Europe (once again) to the Balkans, and from within Russia to the Middle East.

Nonetheless, given our current situations in America and across the world, it may be wise for us to learn something from that first Christmas Truce, and see if we can create one that will last. The opposing sides are no longer the armies of warring nations, and the battlefields are no longer lined with trenches, but there is certainly still something wrong with us as a species if we're killing each other 100 years after we fought the "war to end all wars." Perhaps it's a fight we will have to maintain amongst and within ourselves until the end of time. But for now, as we enter 2015, may our own modern protagonists of peace prevail over those lone snipers on the wings.