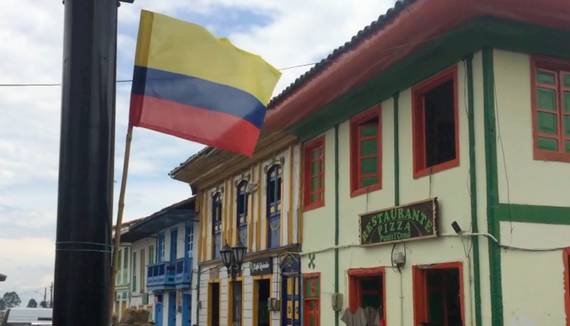 Given Colombia's recent economic success during years of war, what could it achieve in years of peace?

Colombia's inherited reputation for cocaine, drug-trafficking and conflict may not be entirely undeserved. But in recent years, a new reputation has emerged -- one of a serious, safer country with dynamic growth opportunities.

Colombia has averaged 4.6 percent annual growth over the last ten years, and it is neck and neck with Peru for Latin America's fastest growing major economy.

But Colombia's momentum is about more than just growth. Macroeconomic stability has helped it make inroads against poverty levels, which have halved since year 2000.

Moreover, Colombia has paired the economic momentum with institution building. The country's democracy has rapidly matured. It is still based on free and fair elections, the results of which have been respected, and there have been successful transfers of power.

Stronger institutions have helped Colombia improve its safety record -- homicides, for example, are down 50 percent in the last decade -- a critical achievement considering the turmoil of the 1990s and early 2000s.

Yet, there is no guarantee that this momentum will continue. Any future success would greatly benefit from Colombia successfully implementing a peace agreement with domestic guerillas.

For decades, Colombia has been gashed and divided by a vicious civil conflict that supposedly pitted leftist rebels against the government and right wing paramilitaries, but in the end had poor people fighting poor people.

A lasting peace has been a key goal of President Juan Manuel Santos, who opened negotiations with FARC rebels in Havana, Cuba in 2012. On September 24, 2015, President Santos and leaders of the Fuerzas Armadas Revolucionarias de Colombia (FARC) announced a breakthrough in these negotiations, stating an agreement would be struck in the next six months.

But could a peace agreement negotiated in Cuba actually put an end to five decades of conflict in Colombia?

There is no clear consensus. Ambivalence toward the dialogue is understandable. After all, there are a lot of open wounds in Colombia, and the opposition, led by former President Alvaro Uribe, feels the government has been too accommodating, offering political inclusion and amnesty to hardened terrorists.

Such is Colombia's fundamental crossroads: peace would be difficult to swallow, but it is a prerequisite for unlocking the country's potential. And given economic challenges on the horizon, the sooner a peace can be consolidated, the better.

Colombia's growth in recent years has been, to an extent, based on strong commodity prices. These prices have declined rapidly.

Colombia is particularly vulnerable to shifts in oil prices. Royalties, taxes and dividends from oil exports account for roughly a quarter of government financing, and oil prices have dropped by half in the last year. The Colombian government will have to plug the resulting gaps from elsewhere.

In an effort to limit commodity reliance and diversify it export portfolio, Bogotá has bet heavily on trade integration.

One critical bottleneck is the country's subpar road system. Colombia is rich in natural resources, but getting those resources to port can be as expensive as shipping them to Asia.

The Santos government is pursuing an aggressive infrastructure plan. The odds of success of the rural elements of this strategy will be greatly improved if development plans are free from guerilla attacks.

These are just some economic reasons why peace would greatly facilitate Colombia's rise. So just what would an agreement in Havana achieve?

Colombia at the Crossroads Colombia's emergence has not been hindered by economic mismanagement or democratic instability.

In Colombia, the problem has always been the violence.

Like in other parts of South America, it's a violence that started due to systemic inequality. But, over the decades, the precepts drifted from ideals towards access to drug routes or outright revenge.

From 2002 to 2010 then-President Álvaro Uribe confronted the guerrilla head-on. His military offensive punished the rebels, reducing their troops by half and killing a number of its influential leaders. Yet while President Alvaro Uribe significantly weakened the FARC, he could not eliminate them.

So his successor, Juan Manuel Santos, has sought to capitalize on the FARC's reduced strength by offering peace negotiations.

But the FARC's leaders in Havana may not have full control over a disjointed movement more interested in drug profits than peace agreements. These elements of the guerrilla may not immediately respect the peace.

So here is an idea: As in other similar peace processes, perhaps the Havana dialogues are not necessarily meant to end the violence -- at least not immediately.

Through the 1990s, the Colombian military and paramilitary attempted to battle the FARC by "quitando el agua del pez" -- draining the water from the fish. In practice, this meant locating the guerillas and "removing" anything that might hide or protect them. This led to spiraling tit-for-tat attacks that made Colombia one of the most dangerous places on the planet in the 1990s.

The current peace process represents a different strategy. Instead of draining the water from the fish, the government hopes to remove the fish's head, arriving at an agreement with the political leaders.

If the government can make peace with the political side of FARC, it believes it can undercut the gangster side. And if Colombia can achieve what has been an elusive peace, only then can it really begin to flex its economic muscles. Until then, Colombia remains at the crossroads.

Otaviano Canuto is an Executive Director at the International Monetary Fund. All opinions expressed here are his own and do not represent those of the IMF or of those governments he represents at the IMF Board

Samuel George is the Latin America Project Manager for the Bertelsmann Foundation, author of The Pacific Pumas, and creator of The Crossroads video series.

Cornelius Fleischhaker is a PhD candidate at the Johns Hopkins School of Advanced International Studies. He is co-author of Five Steps to Kickstart Brazil.

NOTE: The videos in this text are a project of Samuel George and the Bertelsmann Foundation and do not necessarily reflect the views of co-authors Otaviano Canuto, Cornelius Fleischhaker, or their institutions.