Wei Wu Wei is the pen name of Terence Gray, a 20th-century, Anglo-Irish author of pithy provocations aimed, like the one in the epigraph, at the prevailing notion of selfhood. By flatly denying the existence of self, he means to shock us into realizing that the self we take for granted does not stand up to scrutiny. Like Eastern sages and Western post-modernists, Wei Wu Wei outs the current default self as a vacuous fabrication.

The purpose of this essay is to describe the current default self and suggest a new one that can withstand the post-modern critique and incorporate the findings of brain science. And there's a bonus! Such a model of selfhood will turn out to be just what we need to keep our footing as the thinking machines we're designing come to rival the brains Nature gave us.

Though preoccupied with self, most of us give little or no thought to the nature of selfhood. What do we mean when we invoke the self-referential pronouns -- me, myself, and I?

Young children think of the self as the body. In adolescence, the sense of self shifts to the mind. With maturity, the mind monitors not only the outer world but itself, and we come to see our self as our "mind's mind," that is, as the interior observer who witnesses what's going on, offers a running commentary on how we're doing, and who consciously chooses when and how to interact with others.

To some, the witness feels like a little man in their head. It has even been billed as 'captain of the soul.' But sober reflection reveals that the witness is not calling the shots. The witness is simply one of many functions of the nervous system, one that tracks the rest. 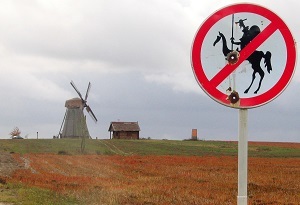 The mind's signature function is the minting of serviceable identities, which, as Shakespeare famously noted,it's called upon to do throughout life. Since "All the world's a stage... and one man in his time plays many parts," we should never mistake a current identity for our "real" self.

To get a handle on the slippery self, It helps to think of brain tissue as hardware, and the ever-changing neural connections as software. Both computers and brains are vulnerable to flaws in their hardware and software, and both require an energy supply.

At present computers and brains work according to very different principles, but we should expect this difference to narrow. When computers work like brains, there is no reason to expect them not to do what brains do. And since the biological constraints on size and speed will be lifted in the "brains" we build, we'd better be prepared for them to perform as well as, or better than, ours do.

The first computers were free-standing machines. Later, we learned how to hook them up and the result was an enormous increase in computing power. A parallel shift in our notion of selfhood is called for. The current default self, subscribed to by most people most of the time, is a stand-alone model. The new default self, to be posited in this essay, is more like a computer network.

Most people speak as if they were separate, autonomous, independent beings, with minds and wills of their own. From early on, we're told to "stand on our own two feet," to "think for ourselves." Self-reliance and self-sufficiency are touted as virtues; dependency,a weakness. We put the "self-made" man or woman on a pedestal and teach the young to emulate these role models.

Call this stand-alone self the "Singular Self." Recognizing its limitations, the Singular Self is quick to ally with others, but not so quick to acknowledge -- let alone compensate -- them for their contributions.

The Singular Self is the current default self. It does not exist according to sages, scientists, and post-modern philosophers. But, better than flatly denying its existence, or exposing it as illusory, is to call it what it is: a useful lie.

The very name -- "self" -- is a misnomer. The term carries strong connotations of autonomy and individuality. It's as if it were chosen to mask our interdependence. The self does not stand alone. On the contrary, the autonomous self and individual agency are both illusory. Selves depend on input from other selves to take form and to do anything. Deprived of inputs from others, selves are stillborn. Contrary to the name we call it by, the self is anything but self-sufficient.

Selves are not only more inclusive, they are also more extensive than commonly believed. They extend beyond our own bodies and minds to include what we usually think of as other selves. The situation is analogous to memory. We think of our memories as located in our mind but when you drive to town, it's the road that holds the memory of the route, reminding you at every turn how to proceed.

So, too, is selfhood dispersed. Much of the information we require in order to function is stored outside our bodies and brains -- in other brains, books, maps, machines, objects, databases, the Internet, and the cloud. We're dependent on external inputs to accumulate enough excitation to reach the threshold of emission for specific behaviors.

As evidence accumulates that the"rugged individualism" of singular selfhood is a myth, and the profound interdependence of selves becomes apparent, our default self is gradually shifting from singular to plural. But until the co-dependent, co-creative nature of selfhood becomes obvious, a distinct term may come in handy. Call the emerging self the "Plural Self" (aka, the Superself.)

Sir Winston Churchill famously said, "In wartime, truth is so precious that she should always be attended by a bodyguard of lies." The truth, long protected by the self-serving lie of the Singular Self, is the Plural Self.

The current ideological divide in politics stems from antithetical views of the self. Conservatives caution that a pluralistic notion of selfhood may inhibit individual agency, whereas Progressives argue that Singular Selfhood rationalizes an inequitable distribution of recognition and reward.

As ways are found to safeguard individual initiative from the inertia of more inclusive decision-making, the Plural Self will supplant the Singular Self as the new default self. With luck, this will happen in time to welcome intelligent machines into the club.

More:
healthy livingAI soulSelfdignity
Newsletter Sign Up
The essential guide to taking care of your mind and body
Subscribe to HuffPost’s wellness email
Successfully Subscribed!
Wellness delivered to your inbox