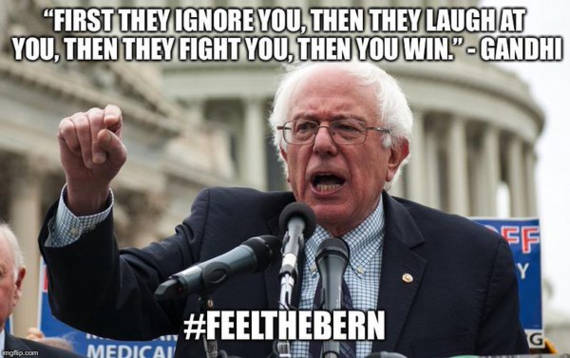 With the Sanders campaign surging in the polls, the Clinton campaign has moved in the past week beyond initialing ignoring and laughing at the gruff Vermont democratic socialist with a Brooklyn accent to attacking him, often disingenuously, both directly and through surrogates.

First it was Clinton Foundation head and former first-daughter Chelsea Clinton accusing Sanders of wanting to dismantle Medicare, Medicaid, Obamacare, and the Children's health program, rather than to guarantee healthcare as a right. Then it was Hillary accusing Sanders of being in the pocket of the NRA, or implying that Sanders is an opponent of President Obama's because Sanders mentioned the hundreds of thousands of dollars in speaking fees Clinton has earned from Goldman Sachs (which has also contributed to Obama's campaigns). Next it was Clinton Super Pac head David Brock questioning Sander's health. Then it was sending out Sen. Clair McCaskill to red bait Sander's democratic socialism with the communist hammer and sickle. Yesterday it was Clinton implying that Sanders would sell Israel out to Iran.

The Clinton machine build over 40 years in politics -- fueled by big money, and a network of politicians and interest groups seeking favor -- is an awesome sight to behold. The Sanders campaign is a bit like a guerilla force fighting Clinton's mechanized military juggernaut. The only way to fight back is through grassroots organization. And if history tells us anything, sometimes the guerillas win.

My modest proposal for Sanders supporters to resist the Clinton attack machine -- play a little drinking game. Every time Hillary, a member of her campaign, or a surrogate attacks Bernie, send Bernie a contribution of $5 or more, call a voter in Iowa, New Hampshire, or South Carolina (and down a shot, too, if you like).

With nearly 2.5 million separate contributions so far, if only half of Sanders' small dollar contributors played the game, it could raise over $6 million every time the Clinton campaign throws mud. That might be the only thing to make the Clinton attack machine think twice about going negative.

But be careful. The attacks from the Clinton camp are likely to be coming so fast and furious that you could be broke and drunk in a hurry.