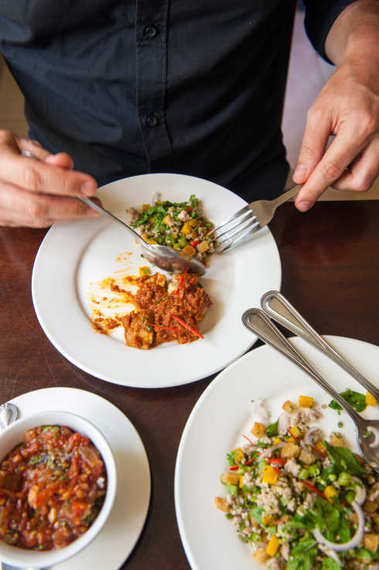 In the near future, humans will laugh about their poor ancestors who had no choice but to eat with basic, outdated cutlery that couldn't manipulate the flavor of their food. That will be thanks to a group of scientists at the University of London, who are developing a device that makes low-sugar food taste sweeter or saltier, if for some reason you actually want your sautéed spinach to taste like birthday cake.

Related: The Chopstick Fork Is the Eating Utensil of the Future

For at least one of the scientists, professor Adrian Cheok, this is a dream come true. He tells The Telegraph he got into engineering with just one noble goal: not to make kids like vegetables, but to allow them to still hate veggies and eat them anyway because technology can make them "taste like chocolate."

Dubbed the Taste Buddy, the deceptive device will trick people, through a low-level electrical current that stimulates taste buds, into tasting flavors that aren't actually present. The scientists' hope for the device, which was revealed this week at England's Big Bang U.K. Young Scientists & Engineers Fair, is to engineer it to fit within everyday utensils or beverage cans. Currently, the team is working on a prototype spoon, but if it all works out, there will be a whole line of microchip-like Bluetooth devices that allow users to "choose the levels of taste you'd like."