The Drama Of Albania is not an exclusive representation of today's miserable quality of governance and leadership in the Balkan republic, but a depiction of the hopeless reality in a majority of developing nations where the apparently operating Western system of democracy and market economy malfunctions. The fallacy opens up the opportunity to the design of new, alternative governance paradigms articulated around global principles, values, priorities and ethics. A new philosophy, a new vision can, must emerge. Society is hungry, thirsty for new approaches, new vehicles capable of resolving the World's most urgent challenges. 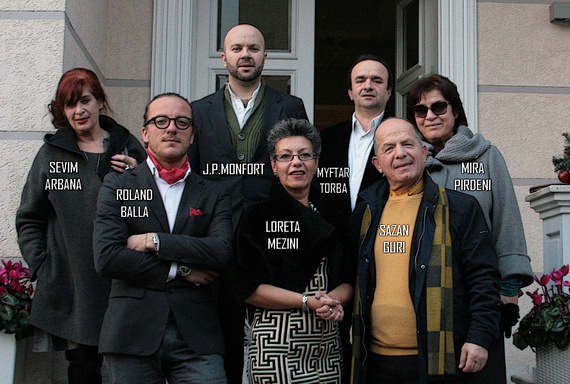 Protagonists of The J.P.Monfort Party in Albania at Vila Alehandro on 12/19/2015

After seven years of field work meeting face-to-face thousands among the World's leading authorities, a new global party was launched in Tirana (Albania) on 12/19/2015. A global alternative to the obsolete nation-state politics is not only necessary but also possible today. Around the table at Vila Alehandro, one of Tirana's finest restaurants, eight of us sit to discuss the convenience of the proposal. Roland Balla is our Host. The young and talented General Manager of Vila Alehandro has only recently returned to Albania after spending fifteen years working in hospitality in Italy. He represents the brain drain of Albania's diaspora willing to return to the Balkan republic to contribute to Albania's definitive emergence towards prosperity. Vila Alehandro is a breathtaking three-story villa built in 1941 during the Italian occupation and located in central Tirana offering a delicious variety of entrees, appetizers, salads, main dishes and a select and wide choice of wines at competitive prices in a luxurious, impeccable eating space. Roland Balla's exquisite manners add up to the emerging team's qualities. The other lunch participants in alphabetical order are Sevim Arbana, Sazan Guri, Loreta Mezini, Mira Pirdeni and Myftar Torba.

Global parties are surprisingly missing from the World's political arena. Perhaps the raison d'etre of such neglect has to do with the nation-state essence of politics, a paradigm that emphasizes ideology and national priorities over pragmatism, practicality and a supranational focus. A new global party must be created to sustain the winds and tsunamis of time. A new global party must be designed to be perfectly resilient to the threats and trips of society's establishment and status quo who shall oppose any paradigm shift that jeopardizes their undeserved privileges oftentimes unfairly inherited from past times. A new global party must be born simultaneously in all countries and territories in order to embrace an ideological center of gravity responding to twenty-first century's challenges.

The academic literature on global parties is scarce. University of Helsinki Professor Heikki Patomaki published "Towards global political parties" in 2011, reminding that "non-governmental organisations, advocacy groups, and networks have limited agendas and legitimacy and, without the support of at least one state, limited means to realise changes". Prof. Patomaki recalls that H.G. Wells in his 1928 'open conspiracy' believed that "only a mass movement of truly committed individuals and groups could have the power to transform the world political organisation, by creating a democratic world commonwealth". In 2013 RMIT University Professor Katarina Sehm-Patomaki wrote "On the organizing global political parties":

"The argument of this article is that pressing global issues, such as world poverty and climate change, cannot be successfully addressed on national scales alone. The blind focus on national economic competitiveness is blurring the global vision. The argument is constructed by way of four subquestions: What are the main challenges of political parties today? What is their connection to global civil society? What are the new movements? And finally, do we need global political parties?"

"The Open Conspiracy is not necessarily antagonistic to any existing government. The Open Conspiracy is a creative, organizing movement and not an anarchistic one. It does not supersede or amalgamate them into a common world directorate. If constitutions, parliaments, and kings can be dealt with as provisional institutions, trustees for the coming of age of the world commonweal, and in so far as they are conducted in that spirit, the Open Conspiracy makes no attack upon them."

H.G. Wells warned society in 1928 of the dangers of another Great War which would subsequently take off in 1939. His remarks then are of extreme importance in 2015, deadline of the (never accomplished) Millennium Development Goals:

"It is no part of modern religion to incur needless hardship or go out of the way to seek martyrdom. If we can do our work easily and happily, so it should be done. But the work is not to be shirked because it cannot be done easily and happily. The vision of a world at peace and liberated for an unending growth of knowledge and power is worth every danger of the way. And since in this age of confusion we must live imperfectly and anyhow die, we may as well suffer, if need be, and die for a great end as for none. Never has the translation of vision into realities been easy since the beginning of human effort. The establishment of the world community will surely exact a price - and who can tell what that price may be? - in toil, suffering, and blood."

Albania embraced one of the World's worst possible regimes during Enver Hoxha's 46 years of extremely closed communist dictatorship. The shock dotrine of the West so well portrayed by Naomi Klein in her 2007 masterpiece brutally entered Albania in the aftermath of the fall of the Berlin Wall. The shock doctrine has left Albanians in trauma. The Trauma Of Albania must be urgently addressed in the emergency room, operated by The Expert Dreamers including Albanian Trauma Association President Dr. Myftar Torba, an impeccable, gentle and sharp surgeon at the service of society. Albania can embrace the World's best regime to become The Dreamers' Republic of Albania, the World's first of its kind. Long Live His Royal Highness Prince Leka II, the heir of the Albanian Royal Throne in the new fiction state of Balkanland.

The J.P.Monfort Party is not political, but post-political. The essence, the nature and the philosophy of post-politics are radically different from those of politics. We must unite our forces to fight against the global economic and financial dictatorship orchestrated and dominated by Western oligarchic interests defended by the foreign services and intelligence agencies of Western nations, the pirates of heartless capitalism who shall oppose any paradigm shift which jeopardizes their interest. There is no jeopardy but Merv Griffin's, I must reckon. A win win scenario opens up if we choose to leave politics behind once and for all.

Post-politics is entertainment based, creating the World's most attractive reality-fiction narratives for the joy of the audience and its mindset's upgrade. Post-politics' narrative is analytical, constructive and prospective, not limited by past pitfalls and by the tragedy of past events. We must look exclusively ahead, forward, learning from the past in order not to repeat history, embracing a new supranational ambition beyond the realm of human nature. Left-wing or right-wing policies may be embraced albeit emancipated from Western domestic interests which prioritize the welfare and well-being of its nationals over those of inhabitants of the developing World. A warning to Albania's political elite shall follow. Wake up or be ready for Armageddon.

I make a promise today, a pledge to each and every human being, that I shall create chapters of The J.P.Monfort Party in every country and territory, that I shall devote the remainder of my lifetime on Earth to identifying The Expert Dreamers in every corner of the World. 4 500 Expert Dreamers from 197 countries and territories among the circa 10 Million Experts worldwide invited regularly have already joined in what has become History's largest and most ambitious recruitment process. I speak onto you the Lovers who dream and the Dreamers who love. Let The Elegant Revolution begin.