Street art, teetering as it has been for the last decade between crime and high-end gallery cash crop, has taken another step toward establishing itself as a legal, rarefied art form. This past weekend saw the launch of the Urban Art Foundation, which styles itself as an ACLU for graffiti-related criminal charges, offering financial backing and legal representation for those arrested for tagging city streets. It also hopes to procure landmark status for some of New York's finest covertly-made works and promote the art form in public schools. 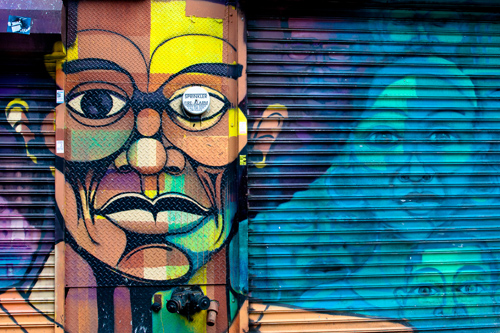 The group went public at a "Meeting of the Styles" at P.S. 15 in Paterson, New Jersey, a "Warriors"-style congregation of international graffiti stars, who came together to raise money for the nascent organization. Participants included such intriguing-sounding spray-painters as Eyesor, Madhatter, Herm Life, and Ms. Bless. Over the course of the day they decorated a wall of the school and offered spray-painting lessons and other art-related activities for children.

Real estate developer Eric Granowsky conceived of the idea for the new foundation, which is in the process of becoming a nonprofit, after he was frustrated by the downsizing of arts programming at his daughter's school -- a sad trend in New York City's public schools, 20 percent of which lack a certified art, music, theater, or dance teacher.

"We want to decriminalize art and at the same time promote it for future generations," co-founder of the Urban Art Foundation Craig Dershowitz told the Wall Street Journal. But not everyone feels that protecting graffiti and making it accessible to children is a good idea. Fred Kress, a coordinator at the organization Citizens Against Graffiti Everywhere, told the Journal of street-bound creative types: "We want to see them reformed or locked up and I would like them to pay restitution. These are vandals, certainly not artists." He continued, "If it's so artful, why aren't they doing it on their own cars and homes?"

This seems to be a sentiment shared by New York City's police department, which has ramped up its anti-graffiti stance, with a bump in street-art-related arrests from 2,962 in 2006 to 4,158 last year.

Visit ARTINFO to learn more about the Urban Art Foundation's hopes to combat the dearth of arts education in public schools with street art.