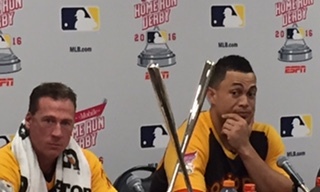 It came down to Giancarlo Stanton, defending champ Todd Frazier, Adam Duvall and Mark Trumbo. These were the four best hitters the Home Run Derby produced. But Giancarlo Stanton began to ease away slowly as he hit a total of sixty-one home runs over three rounds to become the new champ.

"After taking a flight here just for this , you know, I figure it's a waste if I don't bring this bad boy home," said Stanton.

The reigning champ, knocked out Duvall by hitting just 15 home runs one more than Duvall who made his first appearance in the Derby. But Stanton's 20 home runs in the final matchup was too much for Frazier as he only blasted 13 in the fan round. Stanton wasn't a surprise since he hits balls out of the ballpark during the season.

Stanton who is one of the league's best power hitters, defeated last year's winner (Frazier of the Chicago White Sox) and top hitter Mark Trumbo of the Baltimore Orioles. After two injuries in the first half of the season, Stanton looked like a true All-Star despite not making the team.

In his first matchup against Robinson Cano, Stanton recored a Derby best of 24 homers in his first appearance at the show. It took 17 homers to knock out Trumbo, then it looked like it got easier when he moved past Frazier with a simple 20 to end the night. His new record surpassed Bobby Abreu's 41 in 2005.

The distance on at lest eight of his homers reached 480 feet or higher. Not surprising as Stanton can clear the highest point at any ballpark. One can only imagine why this kid hasn't participated in the Derby before. He finished the first half with 20 homers and 50 RBI before the break.

Stanton can defend his title next year when the Miami Marlins host the 2017 MLB All-Star game. He's the first Marlins player to win a Home Run Derby. His longest home run of the night went 497 feet. Stanton had eight of the longest home runs of the night. If he stays healthy one can only wonder if he'll break his own record.

"Just depends, depends on how the year is going, depends on where it is," when asked about defining his title. "Depends on a lot of things. Next year it's at home, so I mean, pretty good chance."