I often feel inundated by the imagery and content in women's magazines that competes to capture my attention in order to sell me stuff. It can be exhausting to read them. Maybe you feel it too?

I decided to create a different kind of magazine for women. One without advertising, with a mission to inspire and enlighten the world by giving voice to the heart and celebrating true beauty. 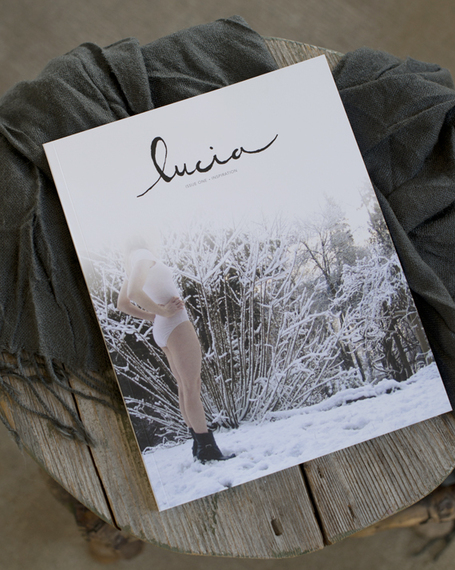 The idea for Lucia came from my own heart's longing to be moved, feel inspired, and connect with what is real. It arose after a lot of travel last year in which I spoke with women and men all over the world about intimate partner violence. I was on a journey seeking to answer the question of why it happened to me by better understanding why it is happening everywhere.

I had conversations in the United States, Europe, and Australia, and they all begged the bigger questions of "What is at the root of violence against women?" and "How can we create real change?"

Of course the objectification of women's bodies is one part of the problem, but underneath it are deeply embedded and centuries-old cultural biases that give more power, control, and voice to masculine ways. The feminine has been marginalized or reduced to sex for centuries. The world is beginning to wake up, but ironically the imbalance is still perpetuated by most so-called women's magazines.

Traveling meant long rides, so I bought and read a lot of them. I found five ways to flatten my belly, plump my lashes, please my partner, and balance my life. Even magazines dedicated to health and wellness featured models and ads glorifying slender, sexualized female bodies.

Much of this content bore little or no resemblance to the voices, stories and ideas I was hearing real women and men of heart share in private conversations everywhere I went. I was inspired to start a magazine that would celebrate these voices, a magazine that I would want to read with intelligent, authentic writing, beautiful photographs, no models, and no ads.

I called up two of the most talented women I know, Karly Siroky (Lucia's design advisor) and Amanda Ford (Lucia's editorial advisor), and together the three of us created Lucia. The maiden issue was just released.

I've never worked for a magazine before. Fear looms large. In tired moments, the voice in my head says, "You are new to this industry. You don't know enough. You might fail."

Each morning, though, I remind myself to pause, feel my heart, and listen to the voice that comes from here. It assures me Lucia does not want to be fashioned after the old model for women's magazines. It feels like there is a collective heartbeat encouraging me to honor and support a shift in the kinds of publications we are willing to create, read, purchase and allow to shape our understanding of ourselves.

Maybe you feel it too? I would love to hear from you.

P.S. I am grateful to Arianna Huffington and the editors at The Huffington Post for inviting me to blog about the issues that prompted the creation of Lucia and our process. I look forward to sharing stories with you as we go.