One of Chicago's most famous City Council members, Michael "Hinky Dink" Kenna, got a quite a gift from his supporters in the First Ward on April 22, 1897: an "alderman's star." It looks like a police officer's badge -- except that it's made out of solid gold and studded with diamonds.

More than a century later, the star is going on display to the public for the first time, this Friday (March 8) at the Chicago History Museum. Take a look at how it still glitters and shines, a vivid symbol of Chicago's age-old culture of political corruption. 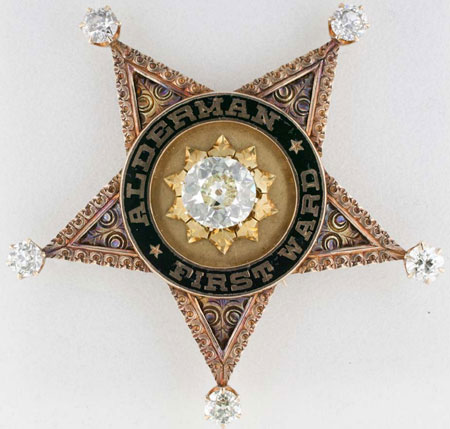 Back in the days when Chicago had two aldermen for every ward, Kenna ran the notorious First Ward in tandem with Aldermen "Bathhouse" John Coughlin. In the 1890s and early 1900s, the two were known as "The Lord of the Levee," which was also the title of a 1943 biography of the aldermanic duo by Lloyd Wendt and Herman Kogan. The Levee was the name for Chicago's vice district, a section of town filled with brothels, gambling parlors, rowdy saloons and opium dens.

Hinky Dink and Bathhouse helped these places stay in business. And in return, the people who ran these illegal establishments -- and the people who enjoying visiting them -- always made sure to get out the vote for their pals on the City Council.

The 5-foot-1 Hinky Dink was a saloonkeeper himself. Starting in 1881, he'd owned a bar at 105 W. Van Buren (which was then 120 W. Van Buren). In contrast to the pompous, loudmouthed and loudly dressed Bathhouse, Kenna was quiet and discreet.

On its blog, the Chicago History Museum notes: "Given the operation the aldermen were running, it is not surprising that they received luxurious gifts from their supporters." After Kenna was elected for the first time in 1897, his supporters gave him the gold-and-diamond star at a banquet. In his acceptance speech, Kenna said, "My aim in life has been to do what is right; to labor with earnestness, to win on my merits. My efforts have met with success, and in this grand souvenir I recognize my crown of victory."

A month after his election to the City Council, Kenna opened a new, more spacious tavern called the Workingmen's Exchange on the 400 block of South Clark Street. Describing this saloon, authors Wendt and Kogan wrote: "The visitors doted on the fine, beery smell of the place, the polished bar, just two inches under 100 feet, and the crystal-clear mirror."

(As Chicago Sun-Times columnist Mark Browna noted on Feb. 26, the building that once housed Hinky Dink's bar now includes the Ewing Annex Hotel, a cubicle hotel targeted for closing by some aldermen.)

If you helped "the Hink" get elected, you'd probably get some free drinks at his saloon. Kenna and Coughlin also paid for many votes in cash. "Fifty cents a vote became the established rate of exchange," Carter Harrison Jr., who was mayor from 1897-1905 and 1911-15, wrote in his memoirs. Harrison continued: "The keen brain of Hinky Dink schemed out ways and means of organizing this unthinking mass into a cohort of obedient political freebooters ready to do the master's bidding at the right time." Thousands of tramps and saloon dwellers carried First Ward Democratic Club membership cards with an almost religious sense of devotion, Harrison wrote.

After Hinky Dink died in 1946, his keepsakes were auctioned off, and the American Diamond Syndicate bought the star. In the 1950s, Ruth "Bazy" Tankersley, the niece of longtime Chicago Tribune Publisher Robert McCormick, acquired Hinky Dink's star. She'd seen it in a Downstate Illinois antique store, whose owner refused to part with it. According to the museum's blog:

After moving to Washington, DC, Tankersley learned that the shop owner had been murdered and his store robbed. She wrote a note of condolence to his widow, who replied that her husband had said that if anything were to happen to him, the Kenna star should go to Ruth Tankersley. Upon receiving the star, Tankersley had it appraised and sent the shop owner's widow the value.

Tankersley, who donated the star to the Chicago History Museum in 2012, died last month in Arizona.

And now, it'll be on display at the Chicago History Museum in March and April, part of a series that the museum calls "Unexpected Chicago." It's an apt title in one sense -- most Chicago history buffs probably didn't expect this artifact to surface now. But on the other hand, it's exactly what you would expect: More proof that Chicago politicians have been accepting outlandish gifts for a long, long time.