"New monasticism is not just a theoretical concept. It is an orientation in life, a commitment that asks us to bring every aspect of our lives into a living relationship with God, with the Spirit, with the Buddha Nature-Mind, with one's deepest Self." 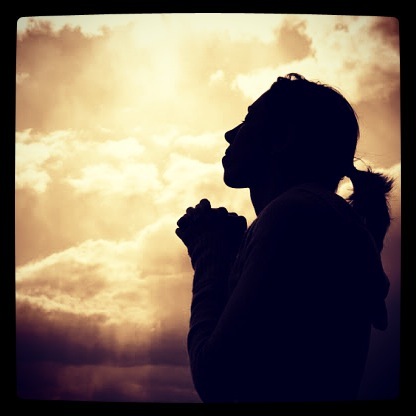 The spirit that lies behind my work comes from a deep longing to harness our contemplative wisdom for a new age, helping those who long to cultivate their own gifts and graces to serve our human family in the greatest way possible, building community and mentorship and Life around that impulse. This is done while acknowledging the dark side of our human predicament; the neurosis in our personal and collective unconscious in need of contemplative healing, and the horrors of the collective dark side of humanity in need of the radical profundity and power of the prophetic spirit.

These elements have always been present in my own journey, from deep impacts in high school of Martin Luther King Jr.'s "Letter from Birmingham Jail" and the exquisiteness of the Declaration of Independence, to my own eye-opening experiences with police brutality and racism, as well as the experience of being a committed single father despite horrendous impediments. A decade of descent into unfathomable darkness, hopelessness and despair wrought a great gift in the crucible of my soul, an ability to identify with the "least among us," the poor, the oppressed, the forgotten. 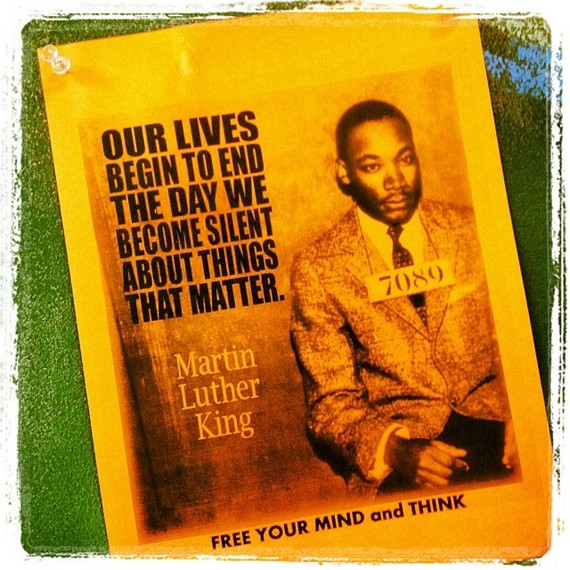 I have found that the vast suffering in humanity, both personal and collective, can become one of the great motivations for passionate contemplative work wedded to social justice and the need to build a new creation. Out of this fulcrum of existential grief, through God's grace can be born a holy power that demands nothing less than the transformation of our human society, and holds out an unwarranted and unbending hope as to its consummation in the "fullness of time." The tragic elements of life, as Howard Thurman, Mother Teresa, Martin Luther King, Jr., Dorothy Day, Jesus, and so many others discovered, holds a hidden key as to the fullness of our humanity--a dangerous, heartbreaking, and potent underground where the Spirit awaits to enact God's most powerful intervention on Earth, the transformation of our own inner beings to become Her transfigured humble servants.

My contemplative journey began in earnest in college, on a class on the historical Jesus, where my professor and the Chair of our religion department, Ron Miller, presented Jesus as a wisdom teacher, one whom we could approach by degree in our own spiritual growth. Through classes, a private tutorial on Thomas Merton (including my first day in silence at Merton's beloved Gethsemane monastery), and most of all friendship, Ron oriented me toward a life of "ultimate concern."

After graduating I attended the Parliament of World's Religions in Cape Town, South Africa with him, where I fatefully met Brother Wayne Teasdale--a close associate of the Dalai Lama, Free Tibet activist and pioneer Catholic monk who was a leader in the inter-monastic Hindu-Christian dialogue. Brother Wayne had been initiated as a Christian sannyasi by Fr. Bede Griffiths in India, and began what is today known as the "interspiritual movement," a term he coined. Brother Wayne led me into the depths of the spiritual journey, becoming my first mystical guide, and with whom I was blessed to participate in the founding of the Interspiritual movement. Especially meaningful and touching was his final visit with the Dalai Lama at his personal residence in Dharamsala, India, where His Holiness expressed to Brother Wayne his unconditional love and support for all of Brother Wayne's projects, because of who he was. 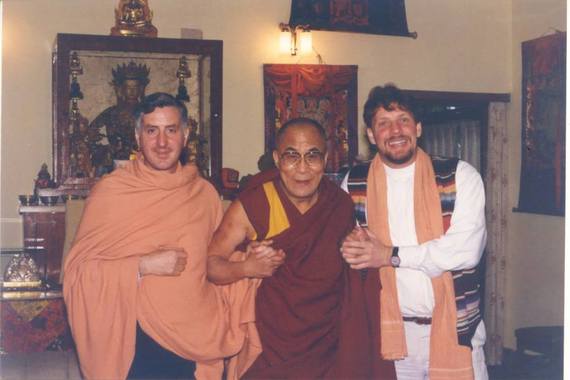 Since Brother Wayne's passing in 2004 I have worked with and helped to found numerous inter-religious and interspiritual projects, currently serving as administrator for the Snowmass Interspiritual Dialogue, an ongoing 30-year project convened by Father Thomas Keating, O.C.S.O., a Roman Catholic monk widely viewed as a spiritual master and founder of the Centering Prayer movement (and who Brother Wayne considered his "spiritual father"). "SISD" as it is known, engages contemplative leaders from multiple faiths in what Raimon Panikkar called the "dialogical dialogue"--where they meet not as representatives of their religious traditions but as contemplatives in search of the ultimate engaging intimately with one another.

Since 2011 my work has been anchored in birthing a novel expression of the radical "new monastic movement." New monasticism has been around for decades, and it was with great respect and honor for its underlying spirit that I first engaged with it. This work emerged as I and a few other contemplative leaders, inspired by many of the uprisings in the Arab World, Europe and the United States, sensed the need to connect the moral outrage felt in these movements to our contemplative traditions. We felt that something beautiful and powerful could emerge through a merging of contemplative, prophetic and secular traditions, as it had in the Civil Rights movement--and that this collaboration could bring together synergistic constituencies with heart-full and nonviolent energy into these continuing struggles for a more just and compassionate world. In collaboration with others, a new monastic vision with an expanded emphasis on deep contemplative living and trans-traditional, inter-religious, and interspiritual sensibilities was formed, while maintaining the prophetic impulse and passionate living of life in the world at the root of new monasticism. 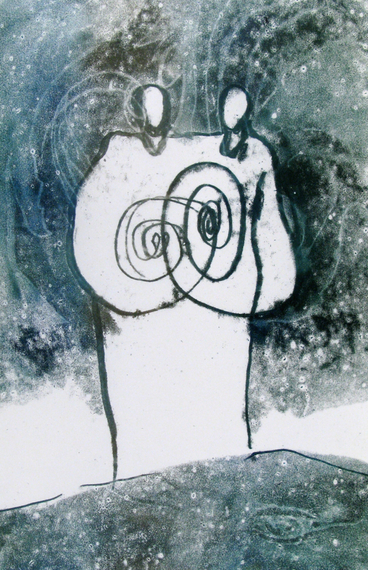 Together with Adam Bucko, a leader who had worked on behalf of homeless youth in New York City, India and Europe, and who founded an organization for homeless youth in New York City (The Reciprocity Foundation), I co-wrote in 2012 a short "New Monastic Manifesto." It spoke of the evolution of "the archetype of the monk"--the total life commitment and spiritual transformation demanded by it--into a form that can be lived out in the world as a catalyst for lasting change, in contemporary lives dedicated to social and political justice, dignified romantic relationships, and spiritual maturation. Our work emerged as a dialogical evocation between contemplative, prophetic, philosophic, theological and social justice traditions. We subsequently received emails from interested professors, social workers, monks and nuns from varying religious traditions, and most of all from young people. Many felt it named something emerging in their hearts, or perhaps something they had already been living, yet didn't have the language to describe.

In the past year I co-wrote a heavily researched book significantly expanding the vision of the manifesto, The New Monasticism: An Interspiritual Manifesto for Contemplative Living (w/ Adam Bucko, Orbis Books, 2015), offering the beginnings of a theological, philosophical, and contemplative understanding to its underpinnings, as well as methodologies for its praxis. In addition, we co-founded the nonprofit Foundation for New Monasticism, a collaboration of old and new, esteemed elders immersed in the depths of our religious traditions and young contemplatives whose paths speak to an emerging spirituality that cuts across traditional religious and spiritual boundaries while engaging passionately with ecological and social justice issues. The Foundation supports new monastic life through offering contemplative and prophetic formation, dialogical engagement with religious traditions, resources for articles, video, and social media, and community building.

My saintly (and perhaps prescient) spiritual mentor, Brother Wayne Teasdale, had sown seeds for this nascent movement back at the beginning of my contemplative journey. Brother Wayne, in his beautiful book A Monk in the World, wrote about a special need in our time for the monastic vocation to be lived out "in the world":

Without doubt, there is great value in spirituality that emphasizes and supports withdrawal from society. But in our time, with its special needs, we require a spirituality of intense involvement and radical engagement with the world...it is in the real world that the wisdom of the monks must be made accessible. It is in the real world that their awakening and development need to occur, not off in remote solitude... Why do I choose to be a monk in the world and not locked away in a remote hermitage? Because I want to identify with and be identified with all those who suffer alone in the world, who are abandoned, homeless, unwanted, unknown, and unloved. I want to know the insecurity and vulnerability they experience, to forge solidarity with them. ... I wish to be near the least, the forgotten and ignored, so I can be a sign of hope and love for them and for all others who need me in some way.

Brother Wayne also developed the ideal of the monk outside of the context of a particular religious tradition, thereby becoming one of the main inspirations for this "interspiritual" new monastic movement:

Monasticism has its origin here in the hidden places of the heart...It is this heartfelt monasticism that has inspired so many souls to venture to mountain caves, desert huts, and remote communities throughout the East and West, whether these seekers be Hindu, Jain, Buddhist, or Christian ... an inner monk doesn't require an overtly religious context. It is an innate expression of the mystical quest that everyone can reach by virtue of our common humanity.

In Part 2: "Inspiring Transformation in the Heart of Radical Change", coming next week, we will speak directly to new monastic life, the need for it in our times, its unique ethos, and the Movement itself.

For more please see The New Monasticism: An Interspiritual Manifesto for Contemplative Living (w/ Adam Bucko, Orbis Books, 2015), and visit the Foundation for New Monasticism. This article was originally published in The Catalyst by The Shift Network, artwork is from Deborah Koff Chapin.