Hurricane Sandy hit just one day before construction was to begin on a massive new shark exhibit at the WCS New York Aquarium. Before a single backhoe touched the ground, the aquarium campus and most of its buildings were destroyed.

Like the rest of our New York community, our day-to-day lives were put on hold as we focused on the challenges of that moment. Years of planning, many hundreds of hours of design, and an unprecedented partnership with New York City and community partners - all washed away by the surge that inundated the aquarium and the rest of Coney Island. 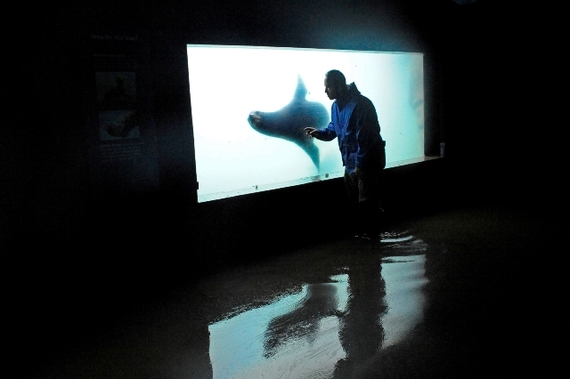 After seven months, millions of dollars spent in emergency cleanup, stabilization and refurbishment, the New York Aquarium partially re-opened on May 25, 2013. The spirit and energy that saw us through the most difficult days in our history were reflected in a new motto: "Support. Rebuild. Transform."

The support: During the weeks and months that followed Sandy, the story of the aquarium staff's work around the clock to save the animals in our care and to return their life support systems to functionality was met by an outpouring of support -- more than a million dollars in $5, $10 and $20 donations from well-wishers in New York and around the world.

Visitors to the renovated New York Aquarium will get a window into the ocean wilderness that surrounds this city of islands. Photo: Julie Larsen Maher ©WCS.

The rebuild: We began cleaning up. We got back on track with the construction of our Ocean Wonders shark exhibit, the new building put on hold due to Sandy, using a new construction plan designed to minimize damage from future storms.

But transform? Transform how, and into what? The answer to those questions provides the key to understanding what is underway at the New York Aquarium. 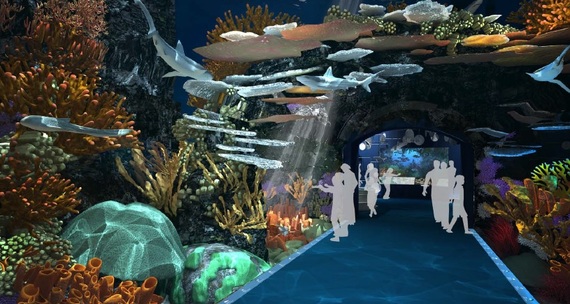 The aquarium's coming Coral Reef Tunnel will highlight the interconnectivity of reef ecosystems and the crucial role that sharks play in keeping them healthy. Graphic: The Portico Group © WCS.

When we fully reopen in 2016 we will be much more than a new building and a cleaned up campus. The new aquarium will be the home of the WCS New York Seascape program -- our research and conservation program focusing on our rivers, harbor, and ocean from Cape May, New Jersey to Montauk, Long Island.

Our visitors will experience firsthand the marine conservation challenges facing New York waters. For the first time, they'll get a window into the ocean wilderness that surrounds this city of islands. They'll understand the issues that face us as a coastal city in an era of rising seas and extreme weather, and how the aquarium is working with partners on every front to help build the economic, cultural, and ecological resilience this city needs in order to thrive. 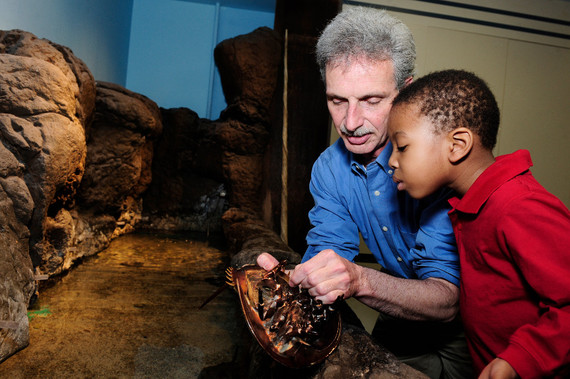 The new New York Aquarium hopes to become an even greater wellspring to an interest, a passion, an education, a career. Photo: Julie Larsen Maher ©WCS.

Visitors will follow the journey of sharks tagged by our scientists in the Great South Bay as they migrate down the coast into the waters of Delaware, the Carolinas and Florida. New Yorkers will join in our work through citizen science programs that will begin to unravel the population dynamics of skates and rays in our waters.

Guests will be introduced to the Hudson Canyon, an offshore submarine formation the size of the Grand Canyon, whose walls rise three-quarters of a mile from the ocean floor. There we hope to help create a National Marine Sanctuary that will protect deep sea corals and the unique ecosystems found in this marvelous place. 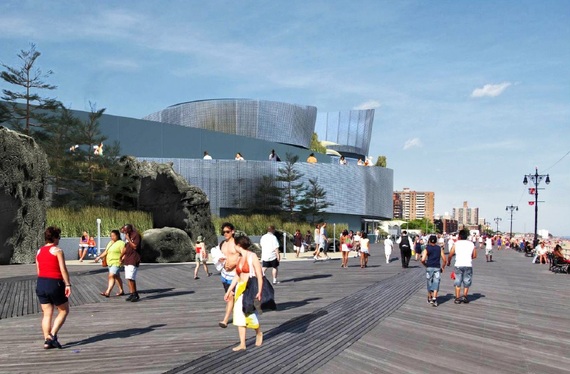 The renovated aquarium will be ocean-facing, inviting Coney Island visitors to step in off the boardwalk and learn more about their marine environment. Graphic: The Portico Group ©WCS.

A visit to the new New York Aquarium will become the inspiring start to an interest, a passion, an education, a career. Our economic contribution to one of New York's most underserved communities through jobs and expenditures will be stronger than ever.

The long recovery from Hurricane Sandy has helped us see that the construction taking place at the aquarium is not just about a new building. Sure, we are creating a provocative and illuminating multidimensional exhibit. But perhaps more importantly we are creating a leading center for marine conservation.