Water and plastic don't mix, and anyone who has read a terrifying article or two about "The Great Pacific Garbage Patch" knows that addressing what seem to be the impossibly huge issues of getting a billion tons of plastic out of our oceans--and preventing the nearly 300 million tons of plastic the world produces annually from polluting them in the first place--will take an effort on a global scale.

Potential solutions come in both micro and macro sizes. To see something bordering on the adorable, head to Baltimore's Inner Harbor, where a solar-powered device called the Trash Wheel slowly devours floating debris before it can make its way to the Chesapeake Bay. In operation since May, the contraption, which looks like something out of a Terry Gilliam movie, uses nets and a conveyor belt to scoop up to 25 tons of trash daily and deposit it in a floating dumpster. Among its catch to date: 40,000 grocery bags, 84,000 plastic bottles, and 4.2 million cigarette butts. 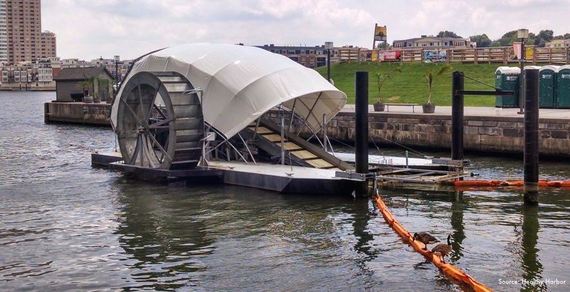 The Trash Wheel is designed to scoop up debris before it can make it out to sea.

You can see the Trash Wheel in action on YouTube (where it shows off its ability to grab logs and tires) and even follow it on Twitter. Part useful tool and part PR effort, it's a great idea that's well worth deploying in other locations where tight tributaries make their way to the sea in front of appreciative audiences who will gain a new understanding of the problem.

A similar idea is on the drawing board in the Netherlands, where garbage grabbing devices will recover trash that planners hope to convert into building blocks that can be used to build urban farms in parks or put underwater as shelter for fish, shellfish and other marine life. 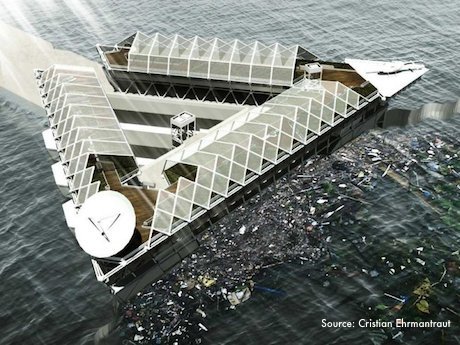 Out in the open ocean, the plastic problem is daunting to say the least. Plastic doesn't biodegrade for centuries, but it does photodegrade, becoming brittle and breaking down into smaller and smaller pieces until the fragments are so tiny that they begin to look like the delicious plankton that fish and whales love to consume. Just off the coast of Easter Island in the South Pacific, architect Cristian Ehrmantraut, working out of the University of Chile, has proposed a stunning floating platform, the majority of which would be a huge pyramid-like structure deployed underwater to suck in seawater, filter out the plastic bits (while protecting marine life) through a sort of "dialysis," and prepare the plastic for recycling.

In Ehrmantraut's ambitious vision, up to 65 people could live on the solar-powered platform to get the work done while they grow their own food. Ultimately, he says, the planet would need innumerable platforms to make a dent in the problem we've already created. With at least five and perhaps eight significant oceanic garbage patches caught in rotating currents, Greenpeace estimates it would take 68 ships sailing and scooping constantly for a year to clean up just one percent of the Pacific, and they'd be burning plenty of fuel while they were doing the job.

Ultimately, most experts seem to agree, cleaning up the plastic will be a harder challenge than stemming its production and consumption. The best place to address this particular issue then seems to be on dry land.

Plastic fouling our oceans is one of the many issues being addressed by the XPRIZE Ocean Initiative, a 10-year commitment to launch a total of five, multi-million dollar ocean XPRIZEs by 2020 (including the $2M Wendy Schmidt Ocean Health XPRIZE). XPRIZE is in a unique position to galvanize a community of innovators, scientists, government officials, business leaders, philanthropists and ocean advocates in service of a bold vision--to turn our oceans away from their current state of crisis and towards real breakthroughs to ensure that the world's oceans become healthy, valued, and understood.