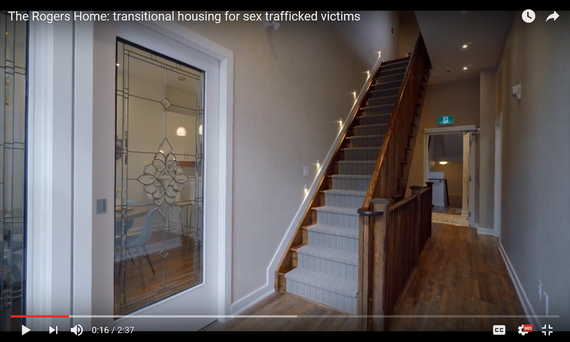 Is there anything better than a new beginning, a safe bedroom to call your own, the smell of a fresh coat of paint, and people around you who want nothing but the best for you, promising to help you attain your dreams? That's what awaits young survivors of the sex trafficking industry, when they enter The Rogers Home, a first-of-its kind collaborative project among Covenant House Toronto, the city of Toronto, its housing authority, and generous donors.

In Canada, as in the U.S., trafficking victims are usually not transported in from other countries -- in Ontario, 63 percent of victims trafficked to, through or from the province were Canadian citizens. In Toronto the police, following a new Human Trafficking Protocol, more than tripled their related arrests between 2013 and 2014. And almost a third of the homeless youth we serve at Covenant House Toronto have been involved in some form of the sex trade, including sex for food. We saw the number of cases of trafficking and sexual exploitation increase more than 40 percent last year, to 64.

So we are overjoyed that The Rogers Home will house as many as seven young women and girls, ages 16 to 24, for up to two years. They will receive community-based trauma counseling, and can use Covenant House's educational and vocational assistance programs. When they are ready to leave, they can have access to Covenant House's community apartments and aftercare program. The location of The Rogers Home will remain confidential, for the safety of residents. A video tour of the new shelter is available here.

"We are proud to be launching this progressive program, which will provide critically needed housing and comprehensive support to these young women to help them reclaim their lives," said Bruce Rivers, executive director of Covenant House Toronto.

The house grew out of a dedicated and diverse partnership. Covenant House Toronto, which will supply ongoing operating funds, has worked with more than 10 leading youth-serving organizations experienced in trauma and addiction, police and legal professionals and hospitals, to help deliver wraparound services.

Toronto Community Housing (TCH) is contributing the property to Covenant House through a long-term lease at a nominal fee, and the City of Toronto and TCH provided significant capital funding for the restoration of the house and improvements to the building. The United Nations Office on Drugs and Crime Voluntary Trust Fund for Victims of Trafficking in Persons contributed $60,000 for services in the house, and Douglas Design Studio donated its interior design work.

Covenant House Toronto's $10-million fundraising campaign, chaired by Suzanne Rogers, will support the house and a comprehensive anti-sex trafficking plan over the next five years. So, far the campaign has raised $8.8 million.

The Toronto expansion is part of Covenant House's recent expansion across the hemisphere. Earlier this month, Covenant House Pennsylvania opened its new Sanctuary Drop-In Center in York, PA, to provide food, clothing, hygiene supplies, and access to showers and laundry facilities, as well as counseling and case management. Also this month, Covenant House California acquired YEAH!, a youth services agency which will, with the help of the City of Berkeley, be able to run a year-round shelter for transitional aged youth. Later this month, we will open new beds for pregnant and parenting teens in Washington D.C., and for homeless and trafficked youth in Anchorage, Alaska.

In Toronto, as I look around the warm and welcoming rooms of The Rogers Home, I am so proud of the first survivors as they move in, and move forward. Their courage and grace inspire me and everyone who works with them to fight harder to end sex trafficking, in Canada, the United States, and anywhere a vulnerable young person is dragged into darkness and exploitation. May we do right by these brave survivors, and give them what they need so they can soar into the future they deserve, feeling loved, confident, and hopeful.