There's a video making the Internet rounds. It introduces us to Heath White, a father who didn't always love his daughter Paisley. Heath reads a letter in which he confesses that before Paisley was born, he urged his wife to have an abortion. Paisley was prenatally diagnosed with Down syndrome, and Heath was devastated by the news. As Heath tells it, he wasn't really worried about Paisley. He was worried about himself, and about how a daughter with Down syndrome would shatter the image he had of himself, an air force pilot, a marathon runner, a perfect student with a perfect family. His wife refused an abortion, however, and a few years later, Heath describes the way he came not only to accept his daughter but to take great delight in her and to count her as his pride and joy.

Heath White's story is unusual only in that it has been viewed by nearly one million people. Plenty of memoirs, including my own, relate a similar set of emotions, from grief and despair to acceptance to wonder and joy. On countless blogs and in articles and interviews, I have told the story of our daughter Penny, who was diagnosed with Down syndrome a few hours after her birth. I have described the initial sense that I was drowning and might never come up for air. I have written about the early months of wondering if it might be OK after all. And I have told story after story about the delightful ordinary life of our daughter. She rides the bus to school in the morning. She has play dates and goes to ballet class and started piano lessons last week. She adores the Clementine books and isn't a big fan of animated movies. She fights with her brother and sister and whines to her mom and dad. And we can't imagine our life without her in it.

It's a story worth telling, because our culture still believes what we once did -- that Down syndrome is cause for grief. Many of us who have children with Down syndrome want the rest of the world to know that we were mistaken in our initial assumptions and emotions. We want the world to know how much we celebrate our children's lives. And so we tell the story, from grief to hope, again and again.

But the more common story, even if it doesn't get told very often, is the one I read in a magazine this summer. This story starts in a similar place, with shock and grief and hopelessness after a prenatal diagnosis of Down syndrome. But it ends differently, because in this story Chloe Ashton chose to terminate her pregnancy. Some studies show up to 90 percent of women with a prenatal diagnosis of Down syndrome abort. These stories begin with grief, and many of them also end with grief. Chloe Ashton concludes her essay: "As I sit here today, almost three years later, I pray for those who may be going through this, and I try to forgive myself. I'm not sure if I ever will."

Over the past 40 years, the social, educational and medical landscape has shifted dramatically for individuals with Down syndrome and their families. Instead of sending children to institutions, parents started to bring their babies with Down syndrome home from the hospital. This familial inclusion led, in time, to the inclusion of children with Down syndrome in schools and places of worship and the workplace. Thanks to legislation like IDEA (The Individuals with Disabilities Education Act) parents gained access to early intervention programs, enabling them to learn how to help their children communicate, gain independence and move around safely. It also led to medical advances and research which, combined with the greater social satisfaction from living in home environments, has caused the life expectancy of people with Down syndrome to double. Currently researchers are working on a variety of measures to potentially mitigate some of the negative effects of Down syndrome, even as social supports continue to improve the quality of life for children and adults with this condition. All of these advances provide the makings of a counter-narrative to the hopelessness that some parents experience when their child is first diagnosed with Down syndrome.

I have a friend with a cousin with Down syndrome. She tells the story of his birth. The room went silent as the doctor offered his diagnosis, but my friend's aunt said, "A baby was just born. Why aren't we celebrating?"

It took me nearly a year to unreservedly celebrate the life that was given to us in our daughter Penny. Seven years later, I am grateful that my grief turned to joy. But I hope our family, along with Heath White's and thousands of others like us, might be a part of writing a story for parents of children with Down syndrome, a story in which hope replaces grief as the first chapter. 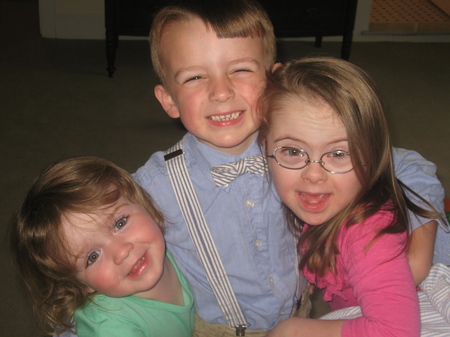 More:
Inclusionparents-pregnancyParentsdown syndrome parents-moms
Newsletter Sign Up
Raise the kind of person you'd like to know
Subscribe to our parenting newsletter.
Successfully Subscribed!
Realness delivered to your inbox