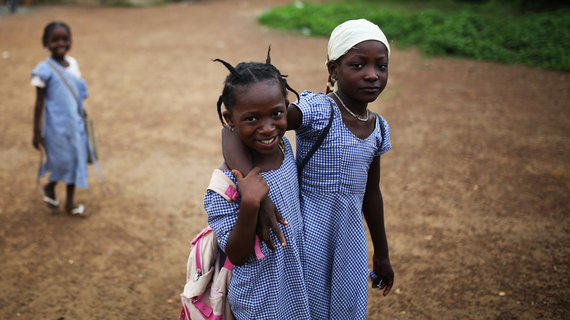 December 15, 2015 -- The evidence is clear: When countries value girls and women as much as boys and men, when they invest in their health, education and skills training, when they give women greater opportunities to participate in the economy, manage incomes, own and run businesses -- the benefits extend far beyond individual girls and women to their children and families, to their communities, to societies and economies at large.

This is the vision behind the World Bank Group's new Gender Equality Strategy. It charts an ambitious path toward improving opportunities for women and girls because it is not only morally right but critical to economic development.

Informed by months of consultations in 22 countries, with governments, civil society organizations, the private sector and others, our new strategy builds on robust evidence that persistent gaps between men and women impose real and significant costs globally that can be addressed.

One area where we can reduce the cost of gender inequality is by expanding access to finance. Women are barred in some countries from opening bank accounts or lines of credit and often don't own the kind of property that banks request as collateral. Promising projects to overcome these constraints include recognizing property such as merchandise and other movable collateral that would allow them to access credit. And for those who only have limited proof of identity, a problem that often begins with failing to register the birth of a girl, other documents like a utility bill could help women open bank accounts, which have been strongly linked to poverty reduction.

Our new gender strategy builds on four objectives, all of them indispensable to a more equal world: reducing maternal mortality and closing remaining health and education gaps; creating more and better jobs for women and for men; closing the gender gap in ownership and control of key assets such as land, housing, technology and finance; and enhancing women's ability to make themselves heard and direct the course of their own lives.

It focuses on promising interventions that achieve tangible, real-world results -- results that transform lives and genuinely level the playing field and create opportunities for all.

In Bangladesh, for example, investments in family planning led to improvements in women's health, declines in child mortality, and increases in female labor force participation. This is projected to boost growth by almost two percent over the next decade. In Latin America and the Caribbean, women's labor force participation increased seven percentage points from 2000-2012, and Bank research attributes to this a significant 30 percent reduction in the region's extreme poverty and 28 percent reduction in inequality over the last decade.

In low-income countries closing productivity gaps between females and males in sectors such as agriculture adds to growth in the overall economy. One of our most recent studies shows that increasing female farmers access to land, capital and financial services would not only lead to real GDP growth, but also ensure a sharp drop in the share of people who go hungry.

We now face the exciting challenge of implementing our new approach and tailoring solutions to suit unique country contexts and building on what works best. We will target areas in which we can be transformational, leveraging partnerships, and working closely with the private sector. And we will innovate and evaluate.

Infrastructure is a promising and often neglected area when it comes to promoting and implementing gender inequality.

More women than men rely on public transport and meeting their needs for safe, reliable, affordable transportation may open up a world of work and other opportunities for women in particular–while creating a better transportation system for everyone.

In Brazil, for example, the Bank Group designed and supported a program to update Rio de Janeiro's sprawling urban transport system, taking high rates of gender-based violence into account and drafting the urban network to deliver a wide range of services to women. Now all stations have women's restrooms and better lighting, while five major stations offer legal, medical, and counseling services to women who experienced violence. A similar initiative is under way in Ecuador.

Gender inequality remains one of the biggest obstacles to shared prosperity. No country, no economy, no company or community can meet today's challenges or achieve its potential until all its people can achieve theirs. We look forward raising our game in ways that get us to equal.