When Kate McCasland came into this world early almost 18 years ago, there was no global movement to reduce deaths of preterm babies. And the staff at the Texas hospital where she was born had never before tried the simple technique that her mom believes saved her life. But Saturday's World Prematurity Day is all about getting that same technique and other high-impact care to the millions of preterm babies who need it most. 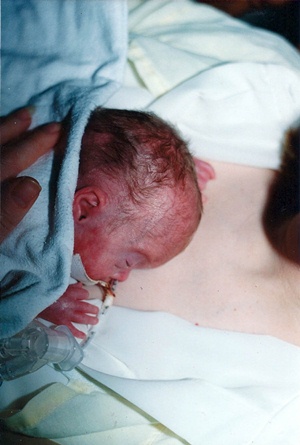 A new study out in The Lancet today makes it clear that training and equipping health workers to care for preterm babies is the key to saving the 1.1 million such babies who die every year. That's because we still know very little about how to prevent babies from being born too soon. A distinguished research team led by Save the Children has found that even if the United States and other high-income countries did everything science currently tells us could help, the vast majority of these early births -- 95 percent -- would continue.

In contrast, good care at birth allows us to save 99 percent of the half-million preterm babies born in this country each year. And even in communities around the world where high-tech intensive care is not realistic and where most preterm deaths occur, low-tech, low-cost care could save 75 percent of these young lives. Now is the time to get that proven-effective, lifesaving care to the babies who will die without it.

Back to Kate in Texas. The simple technique that helped her could, by itself, save the lives of 450,000 preterm babies born in developing countries every year. In an interesting twist, Kate's mom, Jane McCasland, actually learned about Kangaroo Mother Care one sleepless night while watching a late-night TV documentary set in Africa. Jane's mind raced as she saw how the mother on TV was able to help her tiny baby survive by keeping the shirtless baby wrapped to her own bare skin.

When incubators are not an option, this technique gives tiny babies the warmth their own bodies have to fight so hard to produce. It also promotes breastfeeding, another proven lifesaver. But as Jane was to find out, there were less quantifiable benefits, too.

The next day she told the staff at the Harris Methodist Fort Worth Hospital that she wanted to try the kangaroo method, only to be told that the doctors thought Jane was too small to even try. But one night soon after, a trusted nurse came to Jane and told her that Kate was having a rough night in the incubator and that her heart rate was up above 200. "Now's the time," she told Jane.

"I have a feeling she was totally defying some doctor's orders," Jane recounts today. "But a mom holding her baby, it's the most natural thing in the world. Her heartbeat dropped, and within about three minutes she was sound asleep. She gained an ounce that very night. When you're talking about a baby who weighs 1 pound 7, that's a lot."

Jane believes her daughter survived thanks to Kangaroo Mother Care, "one gutsy nurse" and the medical team who quickly supported the method once they saw how effective it was. They learned from Kate's case, applied that to helping other babies and eventually put the picture you see above on hospital literature promoting their use of Kangaroo Mother Care. 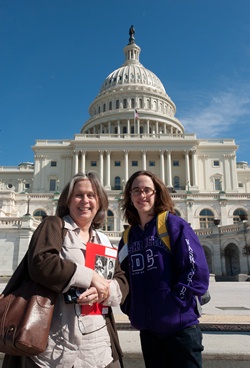 Jane brought Kate home on what should have been her due date, nearly four months after her birth. Now a high school senior, a driven and passionate Kate has become an advocate for newborn health around Texas and around the world. And she's decided that she wants to become a neonatal nurse herself. She told her mom that it's a nice way to say "thank you" to the health workers who saved her life.

Jane couldn't be prouder of her daughter or more thankful to the team at Harris, so she has nominated them for a REAL Award, a first-of-its kind award initiative designed to honor health workers and their lifesaving work around the world.

"I still look back and think, 'Oh my gosh, how did she make it?'" Jane says. "There were no egos. It wasn't about them. It was about getting my daughter home, and you don't forget people like that."

This World Prematurity Day, Nov. 17, take a moment to celebrate health workers whose lifesaving work includes making sure babies born too soon are not born to die. Read about the global honorees and nominate an American health worker who has touched your life at www.TheRealAwards.com.