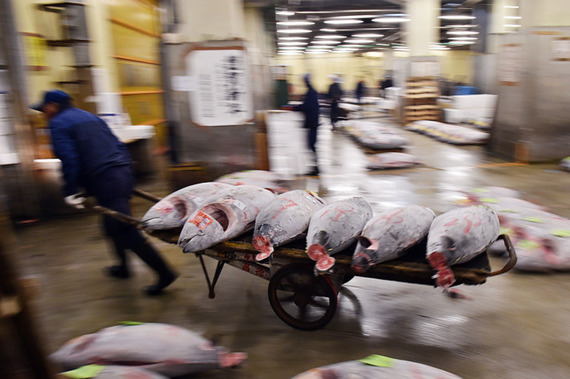 If the world keeps fishing at its current pace, there will no more fish left to eat by 2048. That's the dire warning laid out by the World Wildlife Federation, which says that the planet's fishing fleet is two to three times larger than the oceans can support, and that 85 percent of the world's fisheries are either fully exploited or overexploited, depleted, or recovering from depletion.

Related: 10 Fish Species You Can Eat With a Clean Conscience

One of the most imperiled species on the planet is the bluefin tuna, which environmental activists and marine scientists have warned for years is in danger of going extinct. Now, after years of those warnings being ignored, the fish is at just 2.6 percent of its historic population, Amanda Nickson of Global Tuna Conservation at the Pew Charitable Trusts tells Quartz. If something is not done in the next two years, Nickson says, "there's a very grave danger of it disappearing."

The Pacific bluefin tuna's situation is so bad in part because 90 percent of those caught in 2013 were too young to reproduce. Which puts a big wedge into, you know, the species's ability to replenish itself. But there's a host of other deeply entrenched problems. Many high-end sushi restaurants are unwilling to stop serving the fish, effectively exploiting its exploitation by pitching it as more and more (and rarer and rarer) of a luxury item. Many consumers are willing to turn a blind eye. As Pacific bluefin have become rarer, its price in Japan has soared. In 2013, one fish was sold in Tokyo for nearly $2 million. Fisherman have responded by relentlessly hunting them down, meaning there's nowhere for bluefin to run. Farmed bluefin, which seemed like it has arrived in the nick of time to save the day, isn't really any better, as most of those fish were juveniles caught at sea and then raised in containment.

Pacific bluefin are just one exploited species, though. Cod, once the backbone of Massachusetts's economy, aren't coming back to New England waters. Maine's lobsters are going extinct, last year's Pacific hake catch went awfully because of warming waters, and toxic-algae blooms have caused West Coast shellfish to die off in droves. Meanwhile, when one fish species collapses, fishermen simply go on to the next. Eventually, though, there won't be a next species.

Related: Maine's Lobsters Could Go Extinct in 85 Years Because of Global Warming

Humans have shown a reluctance or unwillingness to actually do something about this, but saving at least some fish isn't impossible. It's already been happening. The Eastern Atlantic Bluefin was once imperiled like its Pacific brethren, but after quotas were slashed in 2010 the species has, in just six years, experienced a rebound. In fact, Shana Miller of the Ocean Foundation, tells Quartz that "it's possible that it will be fully recovered" by next year. Over the last twenty years, 39 other species in American fisheries have similarly recovered and overfishing is down to its lowest level since 1997. People also need to, as it's been argued, embrace eating invasive species and fish usually discarded as trash. Bluefin can survive, they just need a moment to breathe -- and so does the ocean.