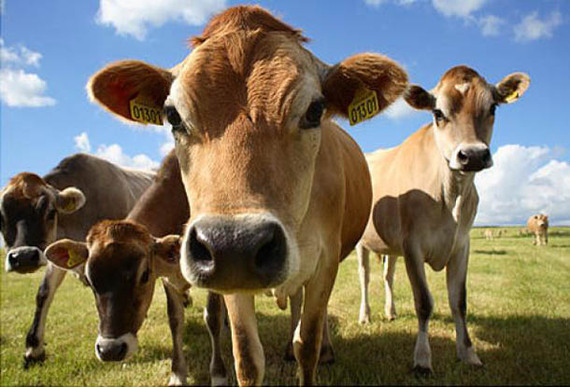 Only 18 percent of the 140 million Americans who usually make New Year's resolutions keep them, according to the latest stats. But that's still a lot of people. More than 25 million, in fact. And, as you may have guessed, the typical resolutions are personal. The top five for 2014 include losing weight, saving money, and staying fit and healthy.

But there's a way to accomplish all those things and protect the planet, too. Eat less beef. That's right. If we all ate less beef, we would not only lose weight, save money and improve our health, we also would significantly cut the pollution that causes global warming.

Losing weight was the No. 1 resolution in 2014. Given that 69 percent of Americans over 19 are either overweight or obese, that shouldn't be a shocker. What may come as a surprise, though, is that red meat -- beef, pork and lamb -- may be a key culprit making us fat.

A June 2005 study in the American Journal of Clinical Nutrition, for example, followed some 55,000 healthy, middle-aged Swedish women. The researchers found that vegans, vegetarians who ate dairy products, and study participants who ate poultry but avoided red meat had a lower risk of being overweight or obese than their more carnivorous counterparts. "The take-home message," lead study author P.K. Newby, a scientist at Tufts University, told the Washington Post, "is that individuals who have the lowest risk of being overweight or obese are consuming a mostly plant-based diet."

The American Journal of Clinical Nutrition published an even bigger study in June 2010 involving roughly 100,000 men and 270,000 women between the ages of 25 and 70 in 10 European countries. The study, which analyzed the connection between weight gain and total meat, red meat, poultry and processed meat consumption, found that a subject increasing his or her meat intake by 9 ounces a day -- the equivalent of one steak at 450 calories -- would lead to a weight gain of nearly 4½ pounds over a five-year period.

So if you want to shed some pounds, you should cut back on beef, as well as pork and lamb.

Eating less meat -- especially the more expensive grades of beef -- will fatten your wallet. The most recent available government data peg the average cost of a pound of ground beef at $3.88, roast beef at $4.88, and steak at $6.33. If you want to splurge, the top of the line sirloin -- USDA Choice boneless -- will set you back $6.80 a pound. Meanwhile, ham -- excluding canned and luncheon slices -- costs only $2.80 a pound, and a whole chicken, $1.52 a pound. Even boneless chicken breasts are only $3.45 a pound, still less than ground beef.

Eating pasta or beans at least once a week instead of meat would stretch your dollars further. For example, if a family of four substituted a meatless spaghetti dinner ($1.29 a pound) for roast beef ($7.32 for 1½ pounds), they would save around $6. That's an annual savings of $312.

In March 2009, a 10-year National Cancer Institute review of studies that followed half a million Americans found that those who ate 4 ounces of red meat or more daily increased their overall risk of premature death 30 percent compared with those who consumed less. Sausage, luncheon meats and other processed meats also increased the risk. Those who ate mostly poultry or fish had a lower risk of premature death.

A March 2012 Harvard School of Public Health review, meanwhile, looked at studies that collectively followed 120,000 Americans' eating habits over a 28-year period. It found that people who ate a serving of beef, pork or lamb every day had a 13 percent increased risk of premature death compared with those who ate little or no red meat. Daily helpings of processed meat, such as two slices of bacon or one hot dog, increased the risk of premature death 20 percent.

The Harvard review also found that replacing one serving of red meat with fish, poultry, nuts, legumes, low-fat diary or grains was associated with a 7 percent to 19 percent lower mortality risk. The researchers estimated that 9.3 percent of male deaths and 7.6 percent of female deaths could have been prevented if study participants had consumed less than half a serving of red meat per day.

When it comes to global warming, not all meat is created equal. The ruminants Americans eat -- mainly cows -- pose the biggest threat to the climate, according to an article in this month's edition of the journal Nature Climate Change.

As you may remember from your high school biology class, ruminants have a multi-chambered stomach. They swallow their food, regurgitate it as cud, chew it again, and then swallow it again. During that process, they silently belch and fart methane, an odorless gas that is about 25 times more powerful than carbon dioxide in its ability to trap radiant heat in the atmosphere. And although there are a number of human activity-related, or anthropogenic, sources of methane -- rice production, landfills and burning fossil fuels, for example -- domesticated ruminants are the largest source worldwide.

"Reducing the emissions from ruminants, which are mostly associated with beef production, could make a big contribution to preventing the worst impacts of global warming," said Doug Boucher, director of climate research and analysis at the Union of Concerned Scientists and a co-author of the Nature Climate Change article. "Globally, ruminants contribute 12 percent of all anthropogenic carbon emissions, and 80 percent of those emissions are from cattle."

The alternative? Boucher and his co-authors point out that methane emissions from pigs and poultry, which have a single-chambered stomach, are negligible by comparison. "If you want to reduce the emissions associated with the food you eat, the most important step is to reduce your consumption of beef," Boucher wrote in a recent blog. "The question of what you replace it with -- pork, poultry or plants only -- is much less important."

If you don't have the stomach to cut out meat entirely, switching to poultry or pork would still go a long way to shrink your carbon footprint. Boucher, a biologist, pointed out that although the biggest emissions reduction would obviously come from becoming a vegan, replacing beef with poultry would get you more than 90 percent of the way there, while switching to pork would achieve at least 80 percent of the methane abatement you would get from only eating plants.

The good news is Americans have been eating less meat, including beef, over the last decade. Annual U.S. beef consumption dropped from its high point of 97 pounds per person in 2002 to 81 pounds in 2011, according to U.S. Department of Agriculture data. But that is still more than consumers in every other country besides Argentina, Brazil and Uruguay, translating into 1,850 to 2,600 pounds of annual carbon emissions per person.

"The fact that Americans are now eating more chicken than beef for the first time in 100 years demonstrates that change is possible," said Boucher. "We're heading in the right direction when it comes to addressing climate change, at least on the diet front, but we have a long way to go."

Elliott Negin is the director of news and commentary at the Union of Concerned Scientists. For more information on how you can cut your carbon footprint by at least 20 percent, see UCS's book, Cooler Smarter: Practical Steps for Low-Carbon Living.