Andrew Sullivan pulls this editorial cartoon from David Horsey, and asks, "How would the Republican base react to this?" 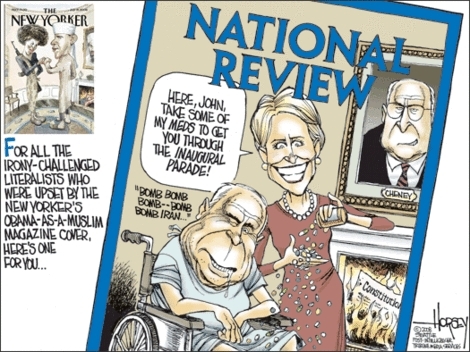 Of course, all things are relative. I would imagine that there are many readers of the National Review who would likely get exercised over this, get offended, and question whether the magazine was doing all it could to ensure a conservative stays in the White House. But then again, McCain isn't a Republican candidate who has a significant, invested fan base among conservatives, so it's just as likely that many readers would shrug and say, "Yep. That about covers it."

In any event, while I think Horsey does a brilliant job in covering the same ground as Barry Blitt, this imagined cover fails in the exact same way as the real cover of the New Yorker, in that it does not actually satirize stereotypes or criticize those who trade in them.

UPDATE: Katrina VandenHeuvel of The Nation responds, along with two of that publication's regular cartoonists.

KVH: "While I understand why many object to this cartoon--and to images which they believe reinforce stereotypes (and there are many at The Nation who found the New Yorker cartoon offensive), I believe satire--even if it flops or offends --has a place in our culture and politics.