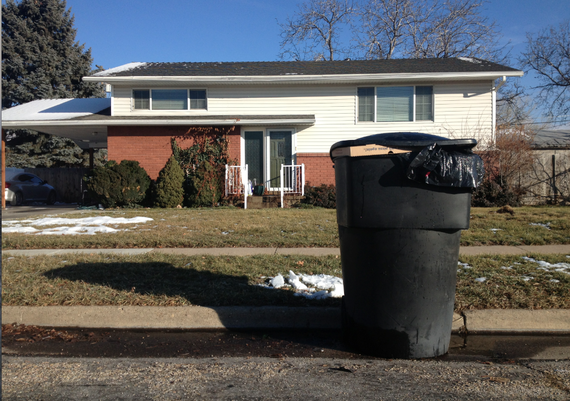 Last month I met up with a group of friends to enjoy the spectacle that is the lights at Temple Square in Salt Lake City. The brisk December air, coupled with our basic human need to eat, led us to the refuge of a bustling food court nearby. The roar of joyous, holiday-infused conversation only intensified as we filed in and joined the crowd.

In such a setting, it's impossible not to enjoy a little "people watching." As I gazed around the massive sitting area, I noticed a mom entertaining her four children as dad was out "hunting and gathering" from Sbarro. Across from me, an awkward first date with a very disinterested girl was playing out as would be expected. A group of, as Schmidt from New Girl would say, "street youths" were wandering around aimlessly. As I followed the course of the "street youths," I noticed a uniformed woman cleaning tables. I counted four or five more of these uniformed individuals busily attending to all the messes people had left behind.

I watched as they went from table to table -- diligently tackling each new mess. I took a second to imagine what a normal day would be like for these people. I concluded that they probably don't get thanked all that often. In fact, as I watched, no one seemed to even acknowledge they were there... that is, until a dirty table inconvenienced someone.

We may not often acknowledge them, but without sanitation workers, we'd all be pretty screwed.

The Big Picture
In a 2013 TED talk, Robin Nagle first opened my eyes to this idea.

Nagle believes that sanitation workers are the most important labor force on the streets of the city.

What happens if no one comes to pick up our trash?

The things we throw away, and have the luxury of forgetting about, can quickly become a community health hazard as they begin to pile up.

And what happens if we can't just throw away the waste we create during the day?

Nagle goes on to say,

We usually don't care for, repair, clean, carry around our coffee cup, our shopping bag, our bottle of water. We use them, we throw them out, we forget about them, because we know there's a workforce on the other side that's going to take it all away.

We live in a culture that has been trained to look down on those who clean up after us. We could probably show a little more gratitude to the people who are so important in maintaining our standard of living. When was the last time you thanked your trash man?

Doing More
Back in the food court, after our bellies were no longer grumbling angrily at us, most of the group had stood up and begun talking amongst themselves. My buddy Kyle and I stood silently waiting for everyone to roll out.

Before we did, a uniformed woman with an emotionless expression approached the table where we had been sitting. She quickly straightened the chairs and began wiping off the table. Having spent the last 20 minutes watching her and her coworkers do their job, I wanted to say something. However, Kyle -- whom I had not included in my train of thought on the matter -- was first to break the silence. With a smile he looked her in the eyes and simply said, "thank you." She forced a slight smile, finished wiping the table, and moved on.

That was it. In all of the time we spent as a group that night, that simple moment is what I remember most.

I know many of us do appreciate the work that our friends in the sanitation business do. I just think we can all be a little better at showing it.

Although, I guess we don't NEED to thank them. It is their job to take our trash away and clean up our messes.

Actually... I take that back. We do need to thank them.

We all want to live in a better world, but when it comes down to it, we're not very good at doing anything about it. The world will never get any better if we choose to ignore those around us. I'd be willing to wager that a lot of the people who claim on the various social media outlets that they've "lost faith in humanity" are the ones who aren't doing much to make things better.

Remember, you're a part of humanity. Don't lose faith in yourself.

When we notice an opportunity to reach out to another human being -- and we do something about it -- we put good into the world. That good could make all the difference for someone. And that's what matters. Our ability to influence others for good is truly a superpower, and we should all be using it more often.

Writer and advocate for better living