Since Elaine Kaufman's death nearly a week ago, there has been an avalanche of words written and spoken about this iconic New York restaurateur. Most were written by -- or about -- the celebrated writers and journalists who made her simple eatery such an institution for more than 45 years. The following are some thoughts by an uncelebrated friend of this extraordinary woman.

At noon on September 10, 1964, I had been discharged -- honorably -- from the United States Army at Ft. Dix New Jersey, following 18 months in West Germany. By ten o'clock that night, I was walking into a somewhat non-descript-looking Yorkville bar/restaurant called Elaine's for the first time. I was there thanks to the recommendation of my friend Bobby Short and it was at such that I introduced myself to its remarkable proprietor. Doubtless the sponsorship of a celebrated nightclub entertainer and good friend of Elaine's had given me some slight edge over the average 21-year-old wandering in off 2nd Avenue. But I think, for Elaine, it was learning -- in the course of two scotch and waters for me and two Ricards and water for her -- that I was going back to Harvard to resume my interrupted undergraduate studies that caused her to take me under her commodious wing. (I was soon to learn that Elaine, in common with Oscar Wilde, liked men with a future and women with a past.)

From that initial encounter, Elaine's magical saloon became my first stop on what were increasingly frequent weekend trips down to New York. Staying up 'til 3 am drinking and talking with some of the regulars -- mostly writers and journalists -- and some of the waiters and of course Madame herself was my introduction to the world of smart, funny grown-ups. Elaine, although only in her mid-30's then, presided over this world with serene and maternal calm, a serenity only occasionally disturbed by the need to deal with an obstreperous customer or an unruly drunk. In these situations her manner was, shall we say, highly effective. 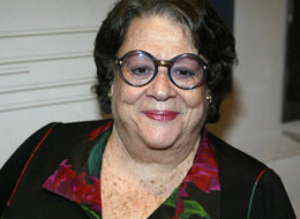 src="https://images.huffingtonpost.com/2010-12-09-sELAINEKAUFMANlarge.jpg" width="300" height="219" />
One particularly memorable night was Christmas Eve 1965 when, at closing time, Elaine suggested that about half a dozen of us race off to the then still-standing Paramount theatre to catch the 4 am showing of Thunderball. At the end of the great Bond film, our motley crew poured out into the thin gray light of Christmas dawn to find a Times Square peopled with the sort of people you would expect to be in Times Square at dawn on Christmas. I remember thinking, "Wow, now this is sophisticated living."

On one of those weekend jaunts to the city, I had asked Elaine to cash a $50 check for me to provide a little ready money -- to which she readily agreed. However, when I came back to New York in two weeks, I was forced to tell her that the check had bounced (she knew) and ask if I could give her a check now for $100 -- replacing the bum one plus an added $50 for current spending money. ($50 went a lot further in the New York of 45 years ago.) This she did without hesitation, extracting the hundred dollars from somewhere deep within her ample décolletage.

However when that check was also returned "NSF" by the Harvard Trust, and I once again returned, asking for further check cashing privileges, this was her response: "Would you stop with the farkakte rubber checks. Just tell me how much you need each weekend, and I'll keep a tab. You can pay me back whenever you can." I obviously quickly agreed to this arrangement. Thus Elaine became my New York bank account for the next year and a half, and for this reason we always told people that she had put me through Harvard. By my graduation the debt had risen to nearly $1,000, a not inconsiderable sum for a C- credit like my young self. Fortunately I was able to repay it within a year or so of my beginning to work on Wall Street (a far less glamorous -- and far less well-paid -- vocation in those days.)

The late '60's were the glory days for Elaine's, as her place was rapidly becoming well-known as a hangout for writers and, increasingly, the show business crowd. But it was still an intimate gathering spot for a fairly small group, defined not by celebrity but by common interests and our common affection for its proprietor. And that affection was warmly returned. In those days, the restaurant was closed on Mondays. Elaine, in the full flush of her initial success, had developed the charming habit of inviting a few of her regulars, plus a few of the waiters, to be her guests for dinner at Café Chauveron, then perhaps the finest restaurant in the city -- and certainly one of the most expensive. At Elaine's insistence, we consumed amazing meals, starting with mounds of black caviar and iced vodka, working our way through multiple gastronomic courses, downing about three serious bottles of wine and ending with soufflés Grand Marnier.

But life as Elaine's friend was not all caviar and soufflés -- or squid salad, veal chops and zabaglione, my then nearly standard meal at her restaurant. Incurring her displeasure could happen fairly frequently, often striking from an unexpected quarter. One night, around 1971, I came in with a date around 10 pm. Elaine greeted me in her gruff but oddly charming way -- "Ya eatin'?" I said, "No, just having drinks. In fact we just had a great meal at Chauveron." (My financial status had also enjoyed a slight improvement.) She fixed me with a stern look and said in a voice an octave or so below her normal contralto, "Chauveron is for Mondays."

A year or two later I foolishly allowed some silly dispute over a mistaken bill to degenerate into a sharp exchange of words. (How I thought I could ever come out on the long end of that interchange I can't, with the wisdom of years, begin to imagine.) But I decided to boycott the establishment for what became almost two years, until I finally realized how much I missed it -- and her. I came back, meekly apologized for my bad behavior, and then began a slow process of working my way back into her good graces -- and from a table in the center rear to one -- after nearly two more years--halfway back along the right.

For those who were not among Elaine's regulars, let me try to explain the table thing. It was not about seeing and being seen. The "good tables" were those where you were likely to end up in a spirited conversation with the table to your right or left -- and often both. Those matches were almost invariably made by Elaine who knew who should know whom -- in case they didn't already. She also saw it as her business to help her patrons' careers along, especially when they were flagging.

Speaking of careers, Elaine gave me the best advice I never took. One night, about six of us were sitting at table #4, when the name of a fairly scurrilous individual came up. Knowing the person, I said of him, "He's nothing but a scam artist." Elaine fixed me with her best prison matron look and intoned these memorable words: "Don't worry about other people's scams. Get one of your own."

On another memorable night, sometime in the late 1970s, I came in for dinner with a well-dressed older woman. I had the sense not to introduce her to Elaine, knowing this wasn't going to be a match made in heaven. At the end of the meal, when I went over to kiss Elaine goodnight, she gave a shrug of her shoulders in the direction of the woman waiting at my table. "Drop the broad," she said in a level sotto voce. "Elaine," I said, affecting a tone of injured innocence, "that 'broad' is my mother." "I know," she said.

When in the late 1980s I moved to LA for what became a nine-year exile, Elaine forgave me, as it was business -- and the movie business at that (the only reason she could imagine for living in Los Angeles.) My appearances at her restaurant remained fairly regular, as stopping in at my old haunt was always the high point of my nearly monthly return visits to New York. But what she could not quite bring herself to forgive was my confession that I actually liked LA. Indeed, my experience of her over the years caused me to take comfort in the belief that, for her, "schmuck" was actually a term of endearment. Although -- come to think of it -- I can't quite recall her ever using it on Gay Talese or Lewis Lapham.

In 1996 I came in one night to give her two pieces of news: I was moving back to NYC for good and, far more important, I was marrying Terry Steiner, whose parents had been bringing her to the restaurant since she was a child. Elaine fixed me with her most intense look and said, with what I assure you was her idea of genuine affection, "It's about time you did something right."