Inspired by the peripatetic Man of La Mancha, I must attempt to write in advance of a terrible history shaping up in Spain.

Conservation biologists and wildlife health professionals were caught off guard this winter when news surfaced that both Spain and Italy were manufacturing and pressing for veterinary use of the drug diclofenac in Europe.

The use of this drug in India in the 1990s to reduce pain and inflammation in cattle and other livestock led to one of the most dramatic wildlife crises in the last 50 years: the total collapse of four vulture species including the White-rumped Vulture -- at that time the most numerous of all large birds-of-prey in the world. The White-rumped's numbers dropped from millions to a mere one percent of its original population in the span of a few years.

The poisoning of vultures in India was unintentional. As the birds began dying in great numbers wildlife health professionals, including my WCS colleague Martin Gilbert, frantically tried to uncover the cause of the sudden declines. After much detective work and considerable political drama, it was determined that vultures had been feeding on carcasses of animals recently injected with diclofenac. The veterinary drug led the vultures to suffer renal failure and die within a few days after ingestion. 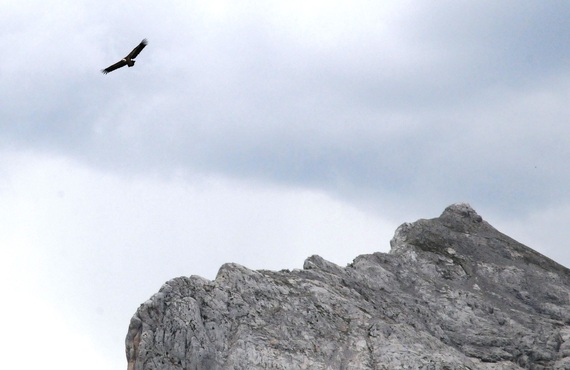 The Griffon Vulture, an iconic sight in Spain's Picos de Europa and other mountains, would be at grave risk if diclofenac was allowed for veterinary use in Europe. Photo by Steve Zack/WCS.

Vultures are obligate scavengers. They forage only on carcasses and they do so thoroughly and efficiently. So potent is diclofenac, and so quick to respond to carcasses in large numbers are vultures, that it was later determined that contamination of only one percent of carcasses with the lethal drug would have been sufficient to cause the population collapse.

As vultures declined in India, exposed livestock carcasses became available to new and less efficient scavengers. There was widespread concern that feral dog populations increased due to the greater availability of rotting meat. With the rise of feral dogs, there was a heightened risk in the growth and spread of diseases like rabies. Rabies then became a greater concern for human populations. A cascading series of health impacts had begun with the loss of vultures in India.

Upon determination that veterinary use of diclofenac in India had led to the losses of vultures, conservationists and others led a successful campaign to ban its use on livestock. A more "vulture-friendly" drug, meloxicam, is now being used. It is slightly more expensive, but clearly the conservation and societal costs are much less.

The loss of India's vultures and the potential for widespread human health risk was a tragedy born out of a lack of information. Once the problem was clearly identified, the offending drug was taken off the shelves and a substitute was found. A hard lesson was learned. 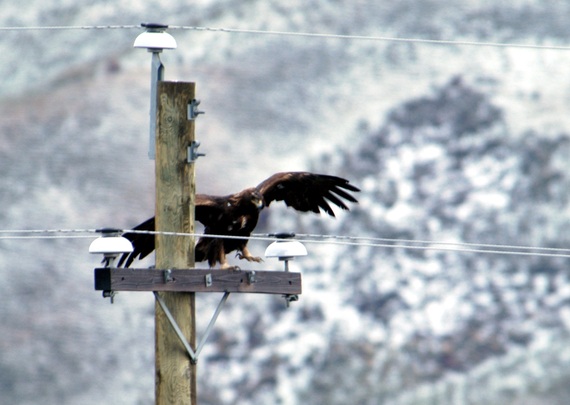 Golden Eagles, in Europe and North America, have enough trouble surviving power lines and other threats loosed by our technology. Will Europe add veterinary diclofenac to the mix? Photo by Steve Zack/WCS.

Spain is Europe's most important country for wildlife. It still has populations of wolves, lynx, and bears, and the highest diversity of birds on the continent. It also holds the most important vulture populations in Europe. Nearly all the Eurasian Griffon Vultures, Cinereous, and Egyptian Vultures, and most of the Bearded Vultures occur in Spain.

Domestic animal carcasses in Spain are traditionally left for scavengers as in India. Spain is rich in vultures as India once was. Veterinary care for livestock is needed in Spain, as it is worldwide.

A new study by my colleague Richard Cuthbert (now WCS's Director of the PNG Country Program) and others has shown that eagles are also vulnerable to the effects of diclofenac. Eagles and vultures are in the same family (Accipitridae) and eagles occasionally scavenge upon domestic animal carcasses. Eagles are iconic symbols on flags and Coats of Arms across Europe (and beyond), and eagles are the national birds in both Spain and Italy (and of course many other countries).

The unintentional devastation of India's vultures is well-known. Yet here we see Spain ready to distribute and use veterinary diclofenac. Even minor usage of the drug on livestock may well lead to a collapse of Europe's vultures and many eagles. With an alternative drug available to avert this certain disaster, a catastrophe waits in the wings, inexplicable and entirely avoidable.

Spain and the rest of Europe have an opportunity for an informed choice that India did not have.

"I know who I am and who I may be, if I choose." -- Miguel de Cervantes Saavedra, Don Quixote de La Mancha