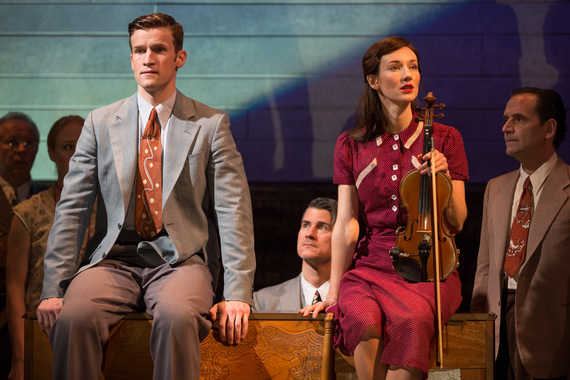 Claybourne Elder and Elizabeth A. Davis in Allegro. Photo: Matthew Murphy
Why can't they just do Broadway musicals the way the authors wrote them in the first place? is a not infrequent cry along the Rialto. If a show was a hit, if a show is a classic, why do modern producers, directors and book doctors insist on trying to make them better?

And then there are the Allegros of the world. Rodgers & Hammerstein, those Midas Touch golden boys of the 1940s and 1950s turned out--as most good Broadway musical fans can count on the fingers of one hand--Oklahoma!, Carousel, South Pacific, The King and I and The Sound of Music in a span of sixteen years. Pretty good, these shows; and it is a testament to the power of their talent that the first four are usually presented just the way The Boys wrote 'em.

Fans with a more comprehensive knowledge of the works of R & H will point out that there were four other stage musicals, one a middlin' hit (Flower Drum Song) and the others of which were duds. Allegro was the first of these. Opening in 1947 on the heels of Oklahoma!, Carousel and Annie Get Your Gun (which R & H produced but didn't write), Allegro broke box office records with an astonishing advance sale of $750,000. But the musical--one of those country-boy-goes-to-the-big-city-and-loses-sight-of-what's-important tales--was pretty thoroughly unloved.

The authors were at what you might consider the height of their artistry, but in this case they slipped on the proverbial banana peel. Part of the problem was that they were working without strong source material, unlike in their five classics; add to that the fact that they passed over the visionary but strong-willed director of Oklahoma! and Carousel (and Porgy and Bess, for that matter), Rouben Mamoulian. Why not promote the choreographer of their first two musicals, Agnes de Mille, to the director's chair?

Between the authors' lack of direction and the director's lack of ability, Allegro fizzled as soon as it ran through all those presold tickets. By which point South Pacific was in the works, so Rodgers & Hammerstein never looked back to their first flop. (Hammerstein, apparently, did puzzle over the failure of this show--which, while not autobiographical, did seem to directly reflect on his miserable first marriage.)

Some practitioners in the field--including one S. Sondheim, a Hammerstein protégé who served as teenaged assistant on the 1947 production--consider Allegro an important step in the development of the American musical. Now, British director John Doyle--who has made his name with a series of stripped-down productions of Sondheim musicals (notably Sweeney Todd and Company)--has taken up the mantle by bringing Allegro to Classic Stage Company, where he in 2013 crafted an immensely pleasing version of Sondheim's Passion. 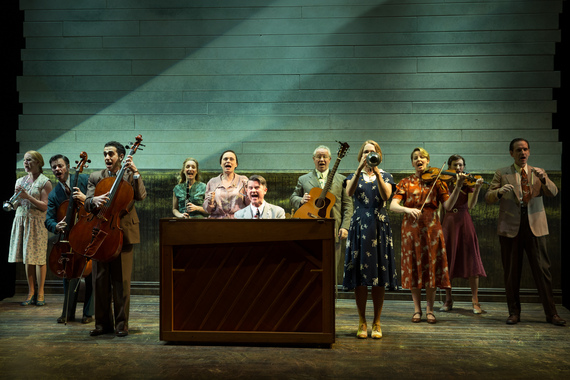 The Cast of Allegro. Photo: Matthew Murphy
The show has been pared to ninety minutes and reformatted for a cast of twelve--in place of the original eighty--who also serve as the orchestra, with the most actors toting instruments around stage we've seen since Once. There is far more clarity than in the last major attempt at Allegro--as the second show in the initial season of City Center Encores! in 1994--and an excision of much of the written-in Greek chorus concept that has heretofore contributed to a dreary night's entertainment. Even so, Allegro is still Allegro. This tale of an idealistic young doctor--the action starting the moment he is born, with a big production number about his first baby steps--remains uninvolving.

That the exemplary showmen Rodgers & Hammerstein were off target can be seen on the title page of the program; allegro is an Italian musical marking, referring to a fast-paced tempo (which Hammerstein refers to as "brisk, lively, merry and bright"). The trouble with the modern-day world, they expect their mainstream audience to absorb, is that the pace of life in high society Chicago is like fast music. "Allegro a musician would so describe the speed of it" they sing in the verse, as if this justifies the song and the title and the show. Maybe that metaphor would work in a musical about musicians; in this medical arena, mightn't the title be the more accurate but less musical Arrhythmia?

So we have Doyle toiling and cutting away at the book and all those de Mille dance slots, which makes the show shorter and streamlined. But, alas, it is Allegro. The Broadway musical is littered with shows that failed in spite of strong scores; some have even gone on to a notable afterlife, with Candide and Follies prime examples. This is not the case with Allegro; there are some worthy songs--"A Fellow Needs a Girl," "So Far," "The Gentleman Is a Dope," "Come Home"--but nothing that simply cries out for a new hearing. (These four "best" songs point to the show's insurmountable unworkability: not one of them is sung by main character.)

There are a few moments where Doyle works enough magic to show us what he had in mind. During "A Fellow Needs a Girl," the villainess who ensnares our hero (Elizabeth A. Davis, the Tony-nominated, violin-playing seductress from Once) plays a violin solo, midstage. Our hero (Claybourne Elder) takes a spot on a bench behind and above her, and plays along. Their violin bows move identically, with shadows thrown on the back wall, in a manner which at once ties together all elements of the production. There is another moment when two of the girls pick up trumpets--the accompaniment is mostly strings and piano elsewhere, with occasional clarinet and flute--and almost explode the fabric of the show to lead into the title song. Which is precisely the point. (The orchestrations come from Doyle's musical director of choice, Mary-Mitchell Campbell.)

Otherwise, this Rodgers & Hammerstein non-masterwork still doesn't work. Some of the performers shine through the wet blanket of a show: Ms. Davis as the errant wife, Alma Cuervo as the grandmother, Jane Pfitsch as the nurse, George Abud as the best friend. And we can salute CSC and Mr. Doyle for doing a perfectly suitable job. But Allegro remains Allegro.
.
Allegro, a revival of the musical with music by Richard Rodgers, book and lyrics by Oscar Hammerstein II, opened November 19, 2014 and continues through December 7 at the Classic Stage Company