"Eat your vegetables." "Brush your teeth before bedtime." "Don't forget to take out the garbage." Who doesn't remember the nagging reminders that echoed through childhood and helped make us responsible adults? Today I've got a story about an amazing effort to save peoples' lives through regular reminders -- more helpful than nagging.

Nightwatch is the name of the program, and its goal is to ensure that people in malaria-endemic areas develop the essential habit of sleeping under a mosquito bednet, every night. Malaria is a preventable and curable disease which still takes approximately 550,000 lives every year, most of them children. Malaria No More is an organization chaired by Peter Chernin and committed to ending malaria deaths by engaging leaders, rallying the public, and delivering life-saving tools and education. For this project, it set out to meet the goal of changing nighttime sleeping behavior by partnering with the Lalela Project (founded by Andrea Kerzner) and market-savvy corporations who know how to reach and communicate with customers in parts of the world were malaria is a serious problem. 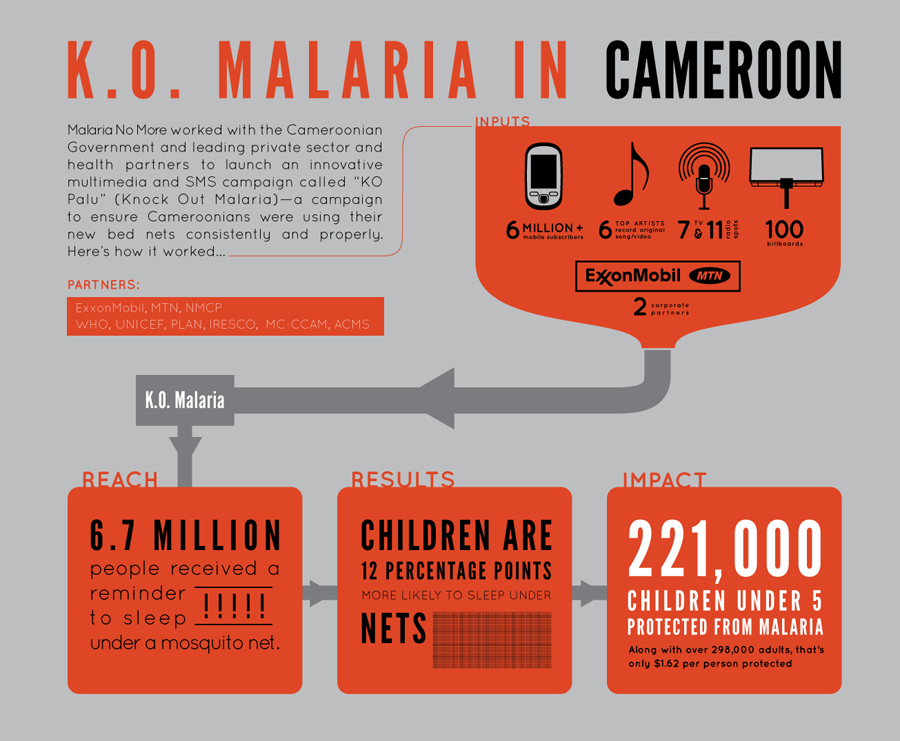 The goal of Nightwatch was to increase demand for and use of long-lasting insecticide treated nets (LLINs) in communities across Cameroon, Senegal, Chad and Tanzania through a targeted, interactive media campaign. The idea was simple: At 9 pm (the mosquitos that cause the disease only bite between 10:00 pm and dawn) every single night -- via radio, television and SMS texting -- remind people to sleep under their mosquito nets. The 30-second radio and television ads featured a "signature" sound and a recognized local or international celebrity.

Malaria No More and the Lalela Project essentially repurposed the iconic 1980s American public service announcement that asked parents: "It's 10 p.m., do you know where your children are?" Leveraging the power of global celebrity voices like Akon, Ludacris, Youssou NDour, Yvonne Chaka Chaka and Lady Ponce, the new campaign asks families in Cameroon: "It's 9 pm: Are you and your family safe under your mosquito nets tonight?"

In Cameroon, the NightWatch launch was timed to coincide with the government's first Universal Coverage Campaign, which oversaw the distribution of more than 8 million LLINs during the second half of 2011, protecting 16 million people. The ExxonMobil Foundation provided the direct resources to implement the program and helped recruit other private sector partners to the fight. Meanwhile, MTN, Africa's leading telecommunications provider, supplied the market insights and marketing leverage to secure spokespeople, media distribution, and weekly SMS reminder messages.

MTN is a consumer-facing company in a fiercely competitive industry, and it understood that NightWatch's target audience was very much aligned with its own: Cameroonian households, especially in rural areas. So when MTN was asked to support the effort, they were happy to oblige and helped to develop the messaging for the national malaria campaign, which was ultimately branded "K.O. Palu," or "Knock Out Malaria." They also brought an indispensable resource: a subscriber base of more than six million people, who received free SMS celebrity reminders to sleep under their nets each night.

As with the best-designed consumer marketing campaigns, this one can be evaluated based on both efficiency and impact. A recent program evaluation showed that NightWatch activities in Cameroon had reached 62 percent of the population after just eight months, via radio, TV, SMS, billboards, and events. More importantly, the educational and motivational messages actually worked. Children whose parents were exposed to the message were more likely to sleep under their mosquito nets. Even after controlling for other factors that influence mosquito net use, NightWatch contributed to over 520,000 more Cameroonians sleeping under available mosquito nets than otherwise would have. At less than $0.16 per adult reached and less than $1.62 per additional person protected by a net, NightWatch in Cameroon showed great return on investment.

The NightWatch campaign is a great demonstration of a communications approach that combines health expertise with marketing savvy. The private sector gained visibility among both consumers and government leaders, and the government and public benefitted from enhanced marketing knowledge that had clear impact on health behaviors.

If we want to meet the health-related Millennium Development Goals on schedule, including achieving near-zero deaths from malaria by December 31, 2015, we need more efforts like NightWatch.