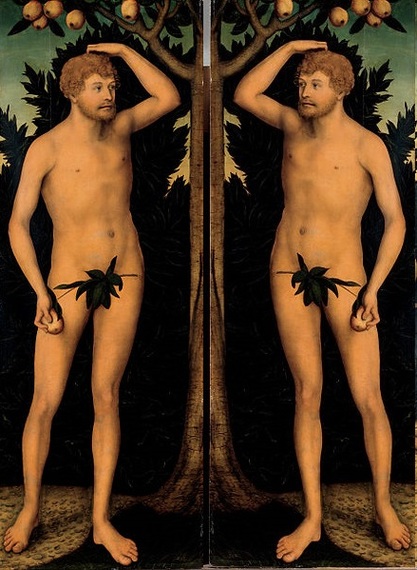 One of the primary Christian arguments against same sex marriage is the Genesis account of human creation. You've heard it a million times, and can probably even imagine the voice of jailed Kentucky County Clerk Kim Davis sputtering it in a righteous spray of spittle:

"It was Adam and Eve, not Adam and Steve!"

But while I'm a Christian, and a fairly conservative one at that (despite being married to a woman), there are numerous problems with using this bit of scripture as a defense for what the oft-wedded Ms. Davis and friends call "traditional marriage".

Let's take a closer look at this iconic couple.

The oogliest problem is the fact that Eve seems to be the first instance of successful human cloning, though God did decide to add a tail to the Y chromosome in the process. So if Adam and Eve are the ultimate marriage model it would mean that we should all mate with our closest genetic match. Most people conclude that this isn't such a great idea, and a number of scriptures decry it.

Another problem is that Adam and Eve were the only humans available. They had no alternative choices from which to pick; it was just them and the animals and that damned snake. So if they are the ultimate model, that means we should pick the person about whom we have the least choice. Maybe the person who is placed in the bassinet adjacent to ours on the day we are born. Most folks in our Western culture believe that individuals should have a say in who they choose to marry. Many even consider arranged marriages to be oppressive (though that's a whole other topic.)

The third problem is that Adam and Eve were immediately dysfunctional. They didn't communicate when something wicked their way came, they blamed each other for joint mistakes, they got kicked out of the best home on the planet, and just look at what happened to their kids.

(If that's your idea of the ideal marriage, you can keep it.)

I've saved the most ironic problem of the Adam and Eve exemplar for last. This first couple, who are at the heart of the one-man-one-woman argument, never had what Ms. Davis is so ardently attempting to defend. Adam and Eve were not married. Their union may have been sanctioned by God, but it certainly wasn't officiated over by either church or state.

So let's put the whole thing together. If Adam and Eve are THE model for marriage, any Christian who demands a literal interpretation of scripture must conclude the following:

Marriage should be between genetic twins, should not involve choice of partner, should not require civil or ecclesiastic involvement, and should result in dysfunctional dynamics.

I don't know about you, but to me this sounds like a list of everything a marriage should not be.

But that's OK, Ms. Davis and your madding crowd of fundies. It was never intended to be paradigmatic for matrimony. The salvation story as a whole is the model for coupling, culminating in the sacrificial love of Christ.

None of those things are demonstrated in the Adam and Eve accounts in Genesis.

So please. Stop with the Adam and Steve. Get a real argument.

And this time, make it a plausible one.