By Meredith Vilarello | Off the Shelf

I was so struck when I heard about Ahmed Mohamed, the fourteen-year-old boy in Texas who made headlines when his teacher mistook the clock he built for a bomb. I cheered as #istandwithahmed trended on Twitter and Ahmed visited the White House to show off his creation. Ahmed and the misguided uproar over his clock immediately reminded me of a novel that I love, Amy Waldman's The Submission. Typically, I turn to fiction to escape my day-to-day life, but sometimes we need to read stories that force us to reflect on and question the strangeness that is our reality, and this emotionally gripping and thought-provoking novel has stayed with me for that very reason. 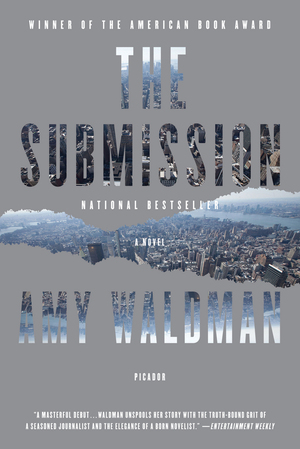 Published two years before the grand opening of the Freedom Tower at Ground Zero, The Submission is set in the wake of a devastating terrorist attack in the name of radical Islam against a major landmark in downtown Manhattan (Waldman never explicitly refers to the attack as 9/11, so I won't either). Struggling with what will become of the hallowed and haunted space where the destroyed buildings once stood, the mayor's office hosts a blind submission contest for the monument that will memorialize the victims of the attack and serve as a testament to the strength of the city. The competition garners hundreds of submissions, and the committee -- helmed by Claire Burwell, a widow who lost her executive husband in the attacks -- selects "The Garden," a spare and lyrical space for visitors to pay their respects in quiet contemplation. The winning designer's name is then pulled from an envelope: Mohammad ("Mo") Khan.

Mo is a Virginia-born rising star at a New York City architecture firm who also happens to be a secular Muslim American and first-generation immigrant, and the selection of his design ignites a firestorm of controversy across the city. Can the designer of a memorial for victims of a terror attack carried out by Muslims be a Muslim himself? Should the committee have reversed their selection and picked a winner who would not be so controversial? Who among the family members of victims of the attack is best suited to decide what the memorial should look like? Does Mo's winning design actually incorporate elements echoing Quranic descriptions of the paradise the attackers hoped to reach after committing the ultimate sacrifice?

I love The Submission because the author refuses to present readers with easy answers to any of these questions. Instead Waldman, a former New York Times bureau chief, explores these complex and complicated issues through the voices of a huge cast of characters, allowing us to draw our own conclusions about who's right and who's wrong.

In addition to Claire and Mo, whose stories provide the emotional backbone of the novel, we hear from the young New York Post reporter who leaks Mo's name before the selection is made public, the Bangladeshi housekeeper forced to grieve silently because the husband she lost in the attacks was an illegal immigrant, the bombastic conservative radio host who serves as Mo's most public critic, the mayor's closest advisor, the virulently anti-Islam crusader whose firefighter brother-in-law died in the attack, and many more. As we follow the various characters in the weeks and months after Mo's selection is made public, we become emotionally invested in the myriad ways in which the decision impacts their lives. At the same time, the novel's settings take us on a tour of a New York City that I'd never seen represented in fiction before, from hushed conference rooms and crowded apartments in far-flung neighborhoods to construction sites, public rallies, mansions, and firehouses.

By taking readers into the worlds of so many whose lives are touched by the controversy over the submission, Waldman shows us the surprising impact that one decision can have on so many. She aptly conveys how something as simple and well-meaning in theory as memorializing victims of a tragic attack can become convoluted and twisted by politics, grief, racism, xenophobia, love, and pride. Mo, Claire, and the many other characters--all from various classes, races, and social statuses--are presented as nuanced and distinct individuals, and each of their voices delivers crucial insights as the story unfolds. More than a decade after the attacks of 9/11 and in a year when Republican presidential candidates are still claiming that a Muslim should never be president of this country, The Submission is shockingly timely and absolutely necessary reading.

Meredith Vilarello is a senior marketing manager at Touchstone, an imprint of Simon & Schuster.

7 Books that Celebrate the Beauty of Language