What is the correct procedure when flying a passenger plane if a nuclear weapon is detonated nearby?: originally appeared on Quora: The best answer to any question. Ask a question, get a great answer. Learn from experts and access insider knowledge. You can follow Quora on Twitter, Facebook, and Google+. 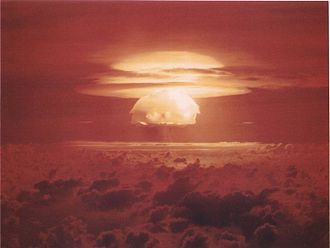 I love the way this question is worded! Let me get to that in a little bit.

What would I do in this circumstance? Cruising along at 34,000', checking the weather in Los Angeles, sipping on a club soda, and on the horizon, a new sun grows out of the desert, all the nearby air and dust fleeing before it?

And now for answering the question:

There is no procedure for that. Your drink slips slowly from your hand, the radio begins to crackle ominously in one ear, and slow, inarticulate expletives start stumbling out of the guy next to you. Just like in the Bikini films -- not to be mistaken with the bikini movies -- you can see the shock wave expanding, ripping up the earth below, cleaving through the atmosphere toward you. Time's not giving you many options, maybe turn into it or away from it, but there's no checklist, no recommendations from the manufacturer. Hopefully you'll survive the blast. Or maybe hopefully you won't? Start looking around for more blasts. Is this Armageddon or just a lone idiot? Regardless, it's a seminal event in the history of mankind and you have a front row seat. Joy.

So, the electromagnetic pulse (EMP) takes out all of the electronics -- the information on exactly what happens is incomplete, but let's assume. Most airliners can fly fine with zero electrical energy, especially older Boeing aircraft like the 757 and 767. Most modern ones have back-up systems in case they lose power in distant locations, all the way to empty batteries. The engines are gravity and suction fed when the pumps shut down, the hydraulics are powered by the engines, and the standby instruments don't need much. The standby gyro has it's own battery, so it's likely going to start tumbing, but as long as you can stay clear of clouds (regular and nuclear), things should be fine. The gear may not come down, but that's not a big worry right now. Now, you just want to get to an airfield that you think will be able to take you and will have a change of pants on hand.

Since air traffic control is likely down, all those no-radio (NORDO) procedures you memorized are down the drain. It's now just see and avoid -- big sky, little airplane theory. Pull out some charts, look at landmarks, navigate to where you think you might be able to land. The main thing you're doing now is driving away from the blast, calculating your range and how far you can go before you are forced to land. Everyone else on board is freaking out, too, including the flight attendants. Get them to start handing out all of the alcohol onboard to as many people as they can. You don't want one rager; you want 100 mellows. Congratulate yourself on not throwing up. Much.